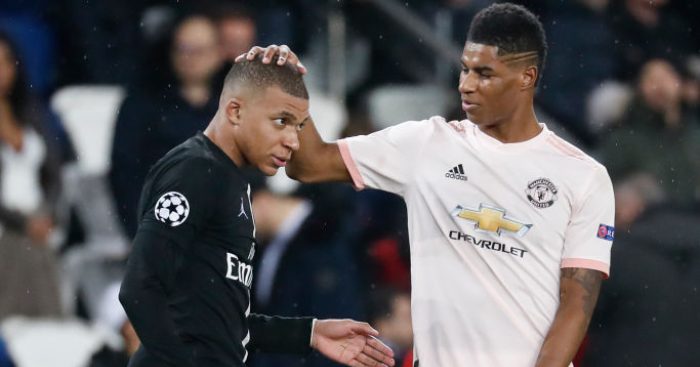 Rashford is the Red Devils’ top goalscorer this season with 19 goals in all competitions with the forward, still only 22, enjoying a fine season for Ole Gunnar Solskjaer’s men until a back issue struck him down in January.

The Premier League’s coronavirus suspension gave Rashford the chance to recover ahead of the June restart and now he’s set to be firing on all cylinders as Man Utd welcome Sheffield United to Old Trafford on Wednesday in their second game back.

And Saha has been that impressed with him this campaign that he reckons he is now on a par “ability-wise” with Mbappe, who scored 30 goals in 33 appearances for PSG this term.

Saha told Compare Bet: “Ability-wise? Yes. They’re both very fast players, they have the technical ability to get out of situations where they’re surrounded by two or three defenders.

“In terms of positions, Marcus and Kylian are quite similar. They like to play out wide but have also played up top. Kylian’s strength is that he is very direct, all the time. He doesn’t think twice.

“When he makes runs, you have to give him the ball, he’s so quick. That kind of directness is something we’ve also seen from Rashford.

“When he started, he was asking questions of defenders – ‘are you quick enough and good enough to keep me quiet for 90 minutes?’

“In terms of quality, they’re definitely in the same bracket. Mbappe has been able to achieve more consistency and approach the game without having to think too much.

“With United, Rashford has been part of a team in transition, so he couldn’t really express himself. He had to be a leader when perhaps it wasn’t his strength at first.

“He had to build qualities which should not have been his initial focus. Mbappe has taken advantage because he’s been able to play with PSG players who are at the very top level, so he’s been able to build confidence and try different things, a platform that Rashford hasn’t had so far.”