Home All The News Louis van Gaal going? What the papers say… 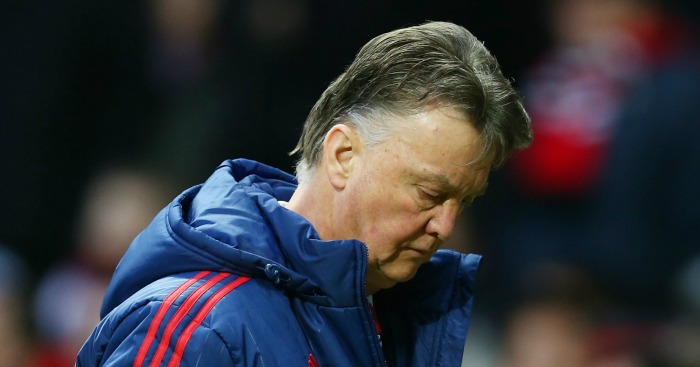 The Sun: ‘LOUIS VAN GAAL is on the brink of quitting Manchester United after admitting he has let the fans down. The Dutch boss was booed off at Old Trafford following Saturday’s 1-0 defeat by Southampton. Yesterday, Van Gaal was believed to have had talks about his future with executive vice-chairman Ed Woodward.’

The Daily Mirror: Louis van Gaal hinted his time as Manchester United is close to the end. United fans turned against van Gaal as he walked towards the tunnel after Saturday’s dismal 1-0 defeat to Southampton at Old Trafford. And the Dutchman said: “I’m very disappointed that I cannot reach the expectations of the fans. They have – or they had – great expectations of me, and I cannot fulfil them, so I am very frustrated because of that.”

The Daily Star: ‘LOUIS VAN GAAL is set for showdown talks over his Manchester United future after admitting for the first time he has been a failure…Starsport understands Van Gaal will now meet with Woodward to discuss his potential exit from a contract that runs until 2017.’

The Daily Mail: ‘Louis van Gaal is on the brink of losing his job after it emerged that Ed Woodward has canvassed senior players about the Manchester United manager’s methods. Woodward, who is the club’s executive vice-chairman, has spoken to individuals following a dip in form that has left United five points off a Champions League place.’

The Daily Express: ‘IT HAS got to the point where Manchester United cannot dither any longer: they need to put Louis van Gaal out of his misery. Serial winner Jose Mourinho is ready and waiting to step in, even if his advisors have rubbished bizarre suggestions he has written a pleading letter to United, offering to change his managerial style. If there remains some hesitancy among United’s hierarchy over Mourinho’s abrasive personality, they should be brave enough to give Ryan Giggs a chance, at least until the end of the season. It would be a huge gamble but the question the Glazer family, United’s owners, and their executive vice-chairman Ed Woodward will be asking themselves is: can we allow the season to get any worse?’

The Guardian: ‘Louis van Gaal has admitted for the first time he has failed Manchester United’s fans in what is the strongest hint yet he may consider his position following the 1-0 home defeat to Southampton. Asked about his appetite to continue as the manager of Manchester United, Van Gaal said: “This question I shall never answer.” Yet he has always cited supporters’ belief in him as a prime factor in his desire to continue. As he walked from the pitch after Saturday’s defeat he was loudly booed, the first time the Old Trafford supporters have been so vocal against him at a league match.’

The Independent: ‘Ed Woodward, Manchester United’s executive vice-chairman, faces a decision over Louis van Gaal which will not only affect the club’s prospects of success this season but also Old Trafford’s hopes of once again becoming the heart of the action during the remaining years of this decade. Does Woodward have a strategy for life with, and after, Van Gaal, or is he a man without a plan?’

The Times: ‘Louis van Gaal has admitted that he has failed at Manchester United, while José Mourinho is increasingly optimistic about his prospects of becoming the club’s next manager. United are understood to have held talks with Mourinho’s camp about the former Chelsea manager replacing Van Gaal next summer, but the situation could be brought to a head sooner if results continue to deteriorate and the Dutchman is sacked or walks away.’

The Daily Telegraph: ‘Louis van Gaal admitted that he had failed to deliver what Manchester United’s supporters expected of him and he may now have to convince the Old Trafford hierarchy that will not be the case for them too, following arguably the most chastening defeat yet of his time in England. The fans’ jury has long been out on Van Gaal’s impact at United since the Dutchman took over at the start of last season and after Charlie Austin’s late headed winning goal on his debut for Southampton the verdict moved noticeably further towards the negative as the players, and Van Gaal in particular, were loudly booed off.’