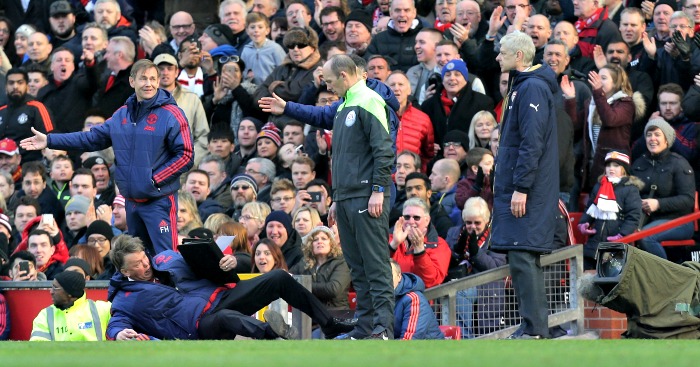 Louis van Gaal has explained the reasons behind his theatrical touchline dive against Arsenal.

In Manchester United’s 3-2 win over the Gunners on Sunday, the Dutchman threw himself to the ground to imitate what he perceived to be a dive by Alexis Sanchez in the second half.

The Old Trafford crowd applauded their manager for his remonstrations against the officials, but Van Gaal apologised post-match.

“It was emotion. I don’t let go too much, not every match. I’m always sitting on my bench,” Van Gaal said.

“But today my emotion was a little bit too high, so I have apologised to the referee and the linesman and everything is already solved.”

Rashford, 18, was one of a number of inexperienced players on show at Old Trafford, with Guillermo Varela, Jesse Lingard, Timothy Fosu-Mensah and James Weir also featuring for the hosts.

Asked about memorable debuts from youngsters, Van Gaal told BBC Sport: “I can imagine a lot of them. Patrick Kluivert makes the winning goal [for Ajax] in the Super Cup in the Netherlands. Xavi, fantastic against I think Valladolid [for Barcelona] and also Thomas Muller a fantastic debut. He was playing in the second team [for Bayern Munich].

“That is why we have a small selection because then you can give youngsters a chance. A big selection means they don’t get a chance.

“My experience is youngsters always play well in their first match. The second match is different. Marcus played well in both matches so he is a special talent.”