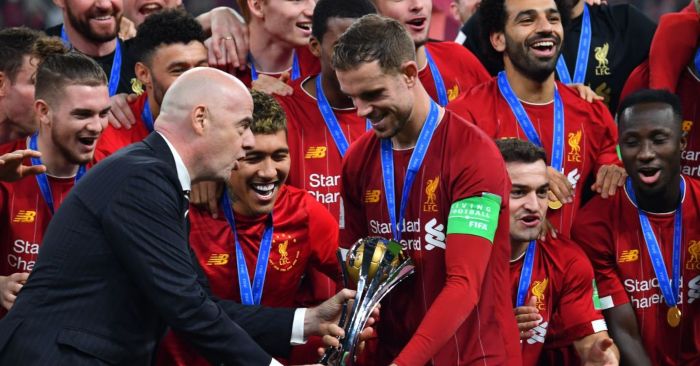 Started from the bottom…
Remember when everyone was laughing at Liverpool celebrating with the fans after their draw with West Brom?

Not laughing anymore are you
Brian (Supporter of continental treble winners, and official best club team in the world) LFC

Liverpool’s new tactic
My goodness the Flamengo players are the masters of sh*thousery. I can’t remember a time that I’ve seen so many players either go down as if they’d been shot but also the number of times they made dirty fouls and got away with it was just remarkable. That was made possible, in part, by the incredibly low standard of the officials.

The ref was so clearly below standard. The penalty decision just highlighted the total inadequacy of his performance. It wasn’t a penalty but how he eventually got to the conclusion that no infringement had occurred at all was astounding.

The game went to extra time but that would never have been necessary if Firmino had his shooting boots on. A couple of fairly poor misses before he eventually kept cool to bury a chance. Liverpool have recently been playing a lot more long balls with the wide attackers starting runs on the wide defender and then cutting in to the central ones. The tactic is great as it catches the central guys off guard and by the time the ball is played they often have a head start in terms of getting into a sprint compared to the central defenders. It’s a great tactic but depends on incredible accuracy with the long ball. It’s not quite the same as the Allardyce “second ball” long ball game. We still play with good variation because we can also go wide using the full backs or transition quicker than virtually any other team in Europe.

I’d read a lot about Gabigol being a superstar but it was Bruno Henrique who stole the show. He had so much pace and trickery and put huge pressure on Trent all night.

Poor AOC. Can he ever catch a bloody break and stay injury free? Hope it’s not as bad as he seemed to fear it was.

And love for ‘ludicrous’ Hendo
Incidentally I’d love to hear what the “Jordan Henderson is average” crowd have been thinking watching him absolutely dominate this season.

He’s hard as anything; squaring up to Gabigol during the game even I was a touch nervous two thousand miles away. I also fondly remember him squaring up to Diego Costa at Chelsea who promptly shat his pants and backed off.

His technique is pretty ludicrous, balls get pinged in at him from all directions and at all heights and he just controls it, soaks up that pressure and still disperses the ball forwards to create all sorts of attacks. I’d criticise him for not scoring enough but for everything else he gives on the pitch I don’t think it matters all that much.

We bought him for £20m and nowadays nobody is laughing about it all that much. So pleased for him personally when you think of his sliding doors moment in nearly being forced to Fulham to make way for Clint Dempsey. He’s now the first captain of an English side to lift the European Cup, the super cup and the club World Cup.
Minty, LFC

Rulers of the world
Hahahah not even the Arabic Mike Dean could ruin that.

Liverpool have officialy won every single international title there is to win in the world after clinching the World Club Cup in dramatic fashion. The one trophy we didn’t have. And with half-season underway, it’s a foregone conclusion we’ll win the premier league. Playing great football on both offense & defense. And yet mancs are giddy ’cause solskjaer beat spurs & citeh. You can’t even make this stuff up. What a time to be alive.
Raúl H. García (I admit i once tweeted #KloppOut… THAT january 2017) LFC-YWNA 1892

Can someone help me figure out if Fred’s LFC meltdown is more Frank Grimes or Ned Flanders?

Thanks for the sending me on a nostalgic trip to my early twenties.

Back then I used to think Man Utd were lucky week after week. Then I grew up.

Any word from Fred this morning? No? Thought not. Liverpool had all the luck go against them last night. And still won. That’s what an elite team does. Chin up eh Fred?
Derek, LFC.

I don’t saying this every time LFC won something. Quite fun actually.

Without bitterness, life is indeed more beautiful.
Lady Lark (you can also call me larky lady)

The match according to Fred

Rest of the first half Flamengo played very well and created a similar number of fantastic chances.

Hendo pulled down at a corner but LSVAR weren’t on duty.

Summary: OMG Liverpool are so lucky that they didn’t concede.

Firmino didn’t actually hit the post after besting the keeper because Fred was making a brew.

Hendo didn’t hit a belting shot which resulted in a world class save because Fred was agreeing with a tweet about the unfairness displayed in the LFC friendly media.

They’re not into the conspiracy to award LFC the champions of the world trophy and that’s why they didn’t fix it.

The fact that Robertson was harshly adjudged to have given away a penalty away at Napoli just proves that the premier league is in cahoots with Liverpool (no premier league win in 30 years is an inconvenient truth).

Firmino scored a goal…lucky bastard. How can a professional player actually score a goal? Must be down to devilish luck

How dare elite athletes spend their entire lives honing their skills and training with their colleagues to create goal scoring opportunities to just rock up in a final and spawn a goal?

Eurgh
I doubt you’ll get many emails on this match so in case anyone is planning on watching the highlights I thought I’d drop a line to the mailbox to say not to bother. What a bag of sh*t that was.

Firstly, City deserved their win over Leicester, and yes, I am a Man United supporter.

I wrote after the Manchester derby how United negated City’s tactical fouling strategy, by instructing the player who won the ball back to move it quickly, before they could be fouled.

But Pep has already worked a response to this. Now City foul the second player who receives the ball, no matter where he is on the pitch, whenever the opposition are breaking quickly.

Best coach in the world? Possibly. But the most cynical of the high profile coaches by far in my opinion, and given how good he and his teams are, absolutely unnecessary
Ged Biglin

Wor Miggy
I’m sure he’ll feature in the upcoming Winners & Column (a personal favorite), but I just want to say how awfully pleased I am for wor Miguel Almiron. I’ve always resented the “just can’t score, and he’s a forward” pieces, however accurate. The lad has run his socks off since he arrived, and makes a lot of good things happen for the team; if nothing else, his acceleration and quick thinking make him a reliable outlet pass when the defense is under pressure. If he’s ready to add aggression and goals to his game, Newcastle could be in for a real treat.