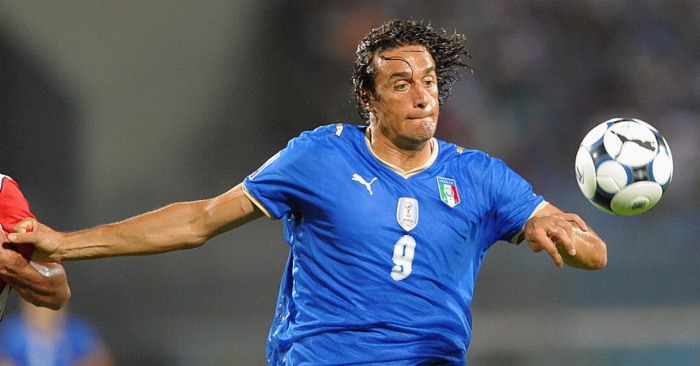 This week Luca Toni is under the microscope. Well, he would never fit under a microscope but still…

He played 658 club games in his career, scoring an impressive 306 goals. His 47 caps for Italy yielded 16 goals. Along the way he collected a World Cup winner’s medal in 2006 and won a domestic triple in his time at Bayern Munich, finishing the season as Bundesliga’s top scorer in 2007/08. There was also a Serie B title with Palermo (he was the top scorer in the league that year) and he won the European Golden Shoe award in 2005/06.

He played in Serie C and B for the first six years of his career before moving to Vincenza in 2000/2001, playing just a single season before moving to Brescia for two years and then getting what turned out to be his big break.

Now aged 26, he joined Palermo in 2003, who at the time were in the second tier but with ambitions for promotion. It was a bit of a gamble to step down a division but it paid off for Luca massively. He scored 30 in 47 and they won promotion. In the following season, he got 21 goals in Palermo’s first Serie A campaign, leading the Sicilian club to a historical first qualification for the UEFA Cup.

Despite being a hero to the fans, he shocked them by moving to Fiorentina for 10 million Euros. This put a lot of pressure on him but 2005/06 was to be a brilliant peak career season.

During his first season in Florence, he scored 31 goals. Amazingly, this was the first time in 50 years that a Serie A player had scored more than 30 goals in a season. Although Fiorentina finished fourth, the place was erased due to the Calciopoli scandal. Luca stayed another season before Bayern snaffled him for a meagre €11.58 million, about £10million.

He was signed at the same time as Franck Ribéry and hit the ground running, scoring an amazing 39 in 46 games for the Germans. It was to be a career high. His second season was blighted with injury and then he fell out with Louis van Gaal and went out on loan to Roma.

This marked the start of three years of drift which saw him play for Genoa, Juventus and Al Nasr before returning to Fiorentina, scoring 21 goals in over 70 games across the three years. It seemed like Luca, now in his mid-30s, was all washed up. But he had a late career last hurrah at Verona, moving there in 2013, playing three seasons and scoring 48 in 95 before calling his 22-year career a day aged 39. He’d won the Serie A Golden Boot for a second time in his very last season. What a star.

Luca Toni was one of the last great old-school number 9 target men, at least until it becomes fashionable again to knock it long for a big man who can score with high-leaping or low stooping headers, long or short-range shots, penalties, scuffed toe-pokes, tap-ins, breakaways and doesn’t mind using any part of his body to get the ball over the line. Elegant or scruffy, it didn’t matter to Luca. They all count one to the total.

While possession and passing as a basic strategy have their appeal, there is a simple and eternal pleasure in seeing a big man playing a physical game which will never be superseded by the more cerebral or precise pleasures.

This was a man who had to work hard to get his chance. He was in his mid-20s before it all really took off for him, 29 when he won the World Cup, and 30 by the time he really hit the big time at Bayern. He’d really paid his dues in the boondocks. This wasn’t a player who had been selected for the big time since an early age.

Even so, Luca was never the most fashionable of players and his selection for the national side was often controversial, as it was felt by some that he didn’t have the skill set needed. However, it is no coincidence that Italy’s World Cup triumph coincided with Luca’s glory years and the year he won the European Golden Shoe.

And yet when we think of great European goalscorers of the past 20 years, his is not the first name we think of, despite scoring a huge 158 goals in just 233 games from 2003 to 2010. Easy to think this is pure snobbery against a big target man and it probably is.

His game was all about power and physicality, two things that it is easy to appreciate from the stands in a way that fast intricate passing which looks good on TV isn’t and can pass you by. In that sense he was a terrace star rather than a TV star. He was primarily right-footed but was plenty good with the left too. One of those strikers who, when he hit a ball, it very much stayed hit.

Because he was divisive, Luca’s name was a good one to drop in order to gauge where someone was in their appreciation of the game. For many, he was out of date. The game had moved on and with artists of the calibre of Francesco Totti in midfield, they saw Toni as little more than a lumbering doofus.

…it got to #34 on the charts too. Looks like something from Eurovision.

There’s something reassuringly normal about the way Toni played the game. It’s hard for a tall man to look elegant and he really doesn’t. As he moves in on goal, raven black hair dripping sweat, defenders hanging off him like flies, often jabbing it home, or bundling one into the corner, it all looked like a huge effort. He’ll go low to head a ball where no ball should be headed, he’ll nudge one in from two yards, he’ll pick up a rebound and slot home.

He did that thing you never see anymore where a striker could leap with his back half turned to the goal, twist his shoulders and head as he connects with the ball, sending it looping into the top corner.

Indeed, if you watch his reels now, he’s playing a game that looks like it now belongs to a different age, even though he only retired four years ago. Surely the big target man is worth reviving as a concept.

He is a reminder that football’s pleasures are many and varied. He was supremely effective rather than brilliant. He just knew what to do to score goals. It takes all sorts to make the whole. Not everyone needs to be, or can be a genius at football, there is always room for someone who just knows how to do one or two things really well. Luca was tough and persistent and knew where to be when a ball needed putting in the net from two or 20 yards. That is an art in itself and should not be thought lesser than any amount of short-arse-pretty-passy-passy-shuffling-fannying-around-merchants.

And on top of all these things, he’s just got a classic Italian name, so classic it sounds like a chain of New York pizza joints. “Hey, let’s go to Luca Toni’s for a slice.” It’s a name which allows everyone to flex their Italian accent and there’s always joy in that.

You have to have a love of Italian football or Bayern to really feel strongly about Mr T. but those that do, all have fond memories of the big man who let’s not forget played for 13 different Italian clubs. I think in part it is because his talent doesn’t feel so far removed from something we might have been able to achieve ourselves. This is an illusion, of course, but he must’ve inspired many a big lad in the Sunday Leagues to have a go up top. It must also be said that his trademark celebration of the twirling hand to right ear (what does it mean?) is an easy one to copy by anyone who stumbles over the ball and stabs it home in the pouring rain one November Sunday in Workington..

We start with a welcome return of the 4_4_Haiku…

‘One of my favourite Italian strikers, remember first being aware of him aged 15/16 in 2005/6 when he was tearing it up with Palermo.’

‘He won the Serie A Golden Boot at the age of 38, a World Cup winner and always scored a tonne of goals wherever he played, a true underrated legend of the game.’

A class act, elegant with a football at his feet, and a gentle giant with excellent finishing ability. Loved him in that Fiorentina team, admired him from afar in Bayern and then in the swansong seasons at Verona. Top top baller.

‘Won the World Cup in 2006. I backed Italy (as I always do). An absolute journey man but did his job wherever he went. Reminds me of Giroud, totally underrated.’

‘I’m fairly convinced that Luca Toni morphed into Mario Gomez and without solid evidence to the contrary I’m going to continue believing that.’

Big Luca was like Jamie Vardy a decade earlier. Rising from the lower leagues to superstardom. Only a lot better looking than Jamie

‘Virtually joined a new club every season so that his agent must have been very happy. Not the most mesmerising striker that Italy ever produced, yet he was first team when they won the World Cup.’

I am shocked every time I see his honours list, not many trophies, but 4 time Golden Boot winner across 3 leagues, UEFA Cup Top Scorer, European Golden Shoe Winner and a World Cup Winners Medal, I would take that every day.

Simply a classic big man at the far-post header.

This compilation of goals for Palermo and Fiorentina show first how good he looks in pink or violet, but also just how many different sorts of goals he could score.

His goals for Italy. The second is an absolutely towering header.

Having teamed up with Fallon Sharrock for a celebrity darts gig in Bonn – surely an unlikely strike partnership – reports suggest he’s not going to have a career with the arrows ahead of him. His is the 40-something former Italy-based generation of players that has moved in some numbers into management in a way that we haven’t seen in England. With Simone and Pippo Inzaghi installed as bosses along with Andrea Pirlo, Ivan Jurić, Vincenzo Italiano, Gennaro Gattuso and Fabio Liverani all current Serie A bosses.

Given he has acquired all his licences and badges, recently getting his UEFA Pro Licence, it would appear he’s also keen on going into coaching and management. Amazingly, he’s only 43 so there’s plenty of time for him to develop. He would certainly be a big, imposing presence in any dressing room and his relatively young age will give him a connection to current players. If he wants to return to a former club, he’s not exactly short of choices. Viva Luca!