Home All The News Lucas Moura: Spurs should ‘dream’ of winning Champions League 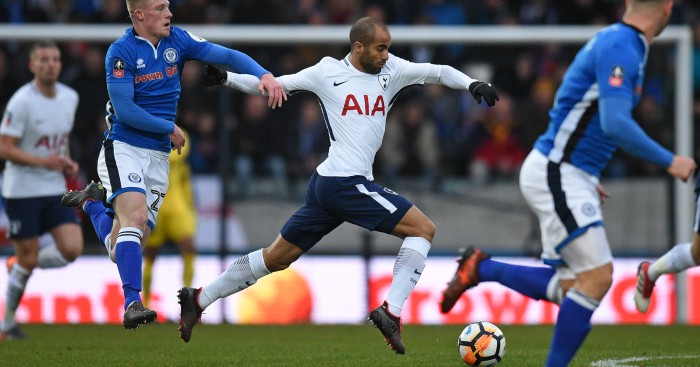 Lucas Moura has backed Tottenham to win a trophy this season – and believes it could be the Champions League.

The 25-year-old midfielder joined Spurs last month in a £25million move from Paris St Germain after five trophy-laden years with the Ligue 1 giants.

Rochdale was an unlikely venue for Moura’s full debut but, after not starting a match for PSG this season, the Brazilian could not have been happier to find himself gracing the Crown Oil Arena’s freshly-laid pitch.

And it showed in his performance, with Moura shining through the drizzle and scoring Tottenham’s first goal in the 2-2 draw in the FA Cup fifth round.

“It’s too difficult for a player when we don’t play. We want always to be on the pitch, to play, but in this time I worked very hard and I stayed always positive, with my family, with my friends, always working, and waited for my new opportunity. I think I played a good game and I’m so happy for that.”

For all the progress made by Spurs under Mauricio Pochettino, the clamour to turn performances into silverware is growing, with the club’s last trophy a League Cup triumph back in 2008.

The Premier League has gone but they remain alive if unconvincing in the FA Cup and can have high hopes of reaching the Champions League quarter-finals after drawing 2-2 with Juventus in Turin last Tuesday.

Moura made his debut as a very late substitute in that game and sees no reason why Tottenham cannot aim at least as high as PSG.

He said: “Why not? The Champions League is the most difficult cup but I think we have the capacity to win. If we always think positive, always work hard.

“I think we did a big game against Juventus away. It’s not easy to score in Italy. I think we had a good result and the next game I am sure that we can win, that we can do a big game with our fans and to continue.

“I am 25 years old but I won a lot of experience with PSG and I can help Tottenham and I think we have a lot of quality, big players, great structure, and I think we can arrive at the end of the season with a trophy.

“It’s always important to win. Every player wants to win trophies and to make history and I am here to make history with my new friends, my new team-mates, and I believe (we can do) that. I think we can dream with the Champions League.”