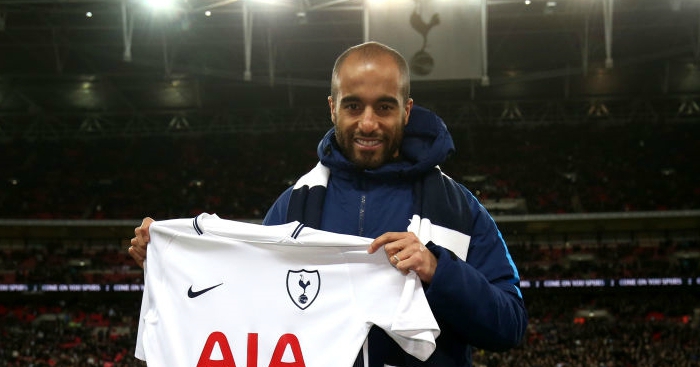 Lucas Moura had other offers in the January transfer window but joined Tottenham to have fun again, according to his former Paris St Germain team-mate Serge Aurier.

The pair are close friends after their time together in France. A Tottenham video posted on Twitter to announce Lucas’ arrival ended with him and Aurier sharing a carefully choreographed handshake.

Lucas, who cost an initial fee of £25million, had fallen out of favour at PSG and Aurier says the forward was keen for a fresh start.

“I’m really happy to have him here. I spoke a lot to him before his arrival and I reassured him,” Aurier said.

“I think he made the right decision. He had other opportunities, but I think it’s the best choice for him and for his career.

“I told him it’s an ambitious club, a beautiful club with a really good team. I think he was looking for somewhere where he could have fun again and he has come to the right team.

“It’s a spirited group here, which is not afraid of welcoming new players and in that regard I know what I’m talking about.

“So he simply made the right choice and now I just hope he’s going to adapt as quickly as possible.”

Lucas could make his debut against Liverpool on Sunday and given he has not featured for PSG in this season’s Champions League, he is also eligible when Tottenham face Juventus later this month.

Asked if Lucas could become a league champion in England, Aurier said with a smile: “We are a bit late for that! But if later this year we succeed in winning something, a cup or something like that, I’m going to try and make him say thank you in English. I think it will be much appreciated by everyone.”

Lucas may need time to get up to speed, with Mauricio Pochettino meticulous about his players being in the best physical shape.

But, despite making only six substitute appearances this term, Aurier believes Lucas will bear no scars from his difficult time at PSG.

“I think it’s behind him today and I hope he’s going to quickly start smiling again at Tottenham,” Aurier said.

“I think he knows a coach makes choices and even if he was disappointed with the amount of time he played there, he is now coming here and finding joy again.

“It’s important for a player to feel confidence and joy and here, it’s an ambitious club, it’s a young group, I think one of the Premier League’s youngest, so it’s a really good choice for him.”