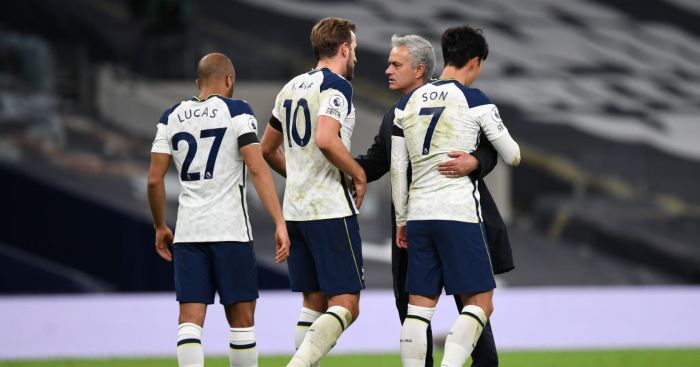 Lucas Moura believes Jose Mourinho is the man to end Tottenham’s trophy drought and could even lead them to the Premier League title.

Spurs currently sit on top of the table, ahead of champions Liverpool on goal difference.

The north Londoners came close to challenging under previous boss Mauricio Pochettino, who also led them to the Champions League final in 2019.

OPINION: Five reasons why Tottenham will win the Premier League

But Brazilian forward Moura feels Mourinho, a three-time Premier League winner with Chelsea, can help them take that extra step to glory.

“I don’t like to speak about previous coaches. I can only speak about the coach we have now,” said Moura.

“Mauricio had a good time here and did a lot for this club, he did really well for the club. Now it’s a new time.

“Everybody knows Mourinho. He is a winner and he has won trophies at every club.

“I want to win with him and I think we deserve to win a trophy. In the last 10 years the club has done well – and it’s time.

“That’s why in every game we are trying to show that mentality and we are doing very well. We need to keep that going.”

As well as his winning mentality, Mourinho has also brought an uncharacteristic sense of fun to the Tottenham training ground.

The Portuguese boss had to fork out £500 on Spanish ham after losing a bet with left-back Sergio Reguilon after the weekend victory over Manchester City.

“I need to say thank you to him for the ham,” added Moura. “I love ham. I was not aware of what he said to Sergio and I was very surprised to see the ham. I like it.”

A picture of Mourinho hamming it up with Reguilon was his latest post on Instagram, something the Spurs boss has taken to this season.

Mourinho raised eyebrows last month when he posted a picture of himself alone on the team coach in the aftermath of the 1-0 Europa League defeat by Royal Antwerp.

Mourinho explained: “I just try to open our world to the world. People love the insight, what they don’t see. It’s good fun for people.

“I think Instagram in this case is an opportunity for little things that don’t hurt anyone, is not a problem at all and sometimes it’s funny.

“In the case of this last one, it’s just a simple thing that sometimes happens. The players want a Spanish ham and it’s quite expensive. Who pays and who doesn’t pay?

“Reguilon has to pay because he’s Spanish? OK, if we win I pay. That’s it. Of course the players were happy that I had to pay for the ham.”

Spurs host Bulgarian side Ludogorets in the Europa League on Thursday night.

They will be without Toby Alderweireld, but the defender’s muscle injury is not as bad as first feared.