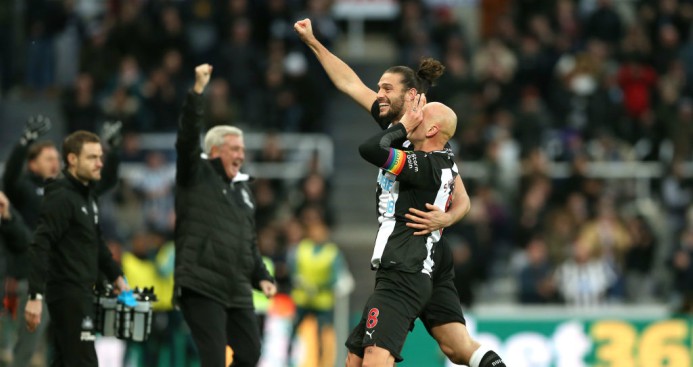 Okay, shall we all raise our hands and admit we picked Newcastle to go down this season? I certainly did. When Steven Roger Bruce was named manager, the phrase ‘disaster waiting to happen’ rang out from all corners of the Internet. In fact, after the first two matches, it looked as if the disaster hadn’t bothered to wait and had grabbed the express rocket to Neptune.

But the holidays are approaching, and back here on Earth, Bruce’s boys now have 22 points from 16 games, 13 from their last six. They haven’t lost at St. James’ Park since the first day of the season, and have taken points there from Manchester City, Manchester United and Wolves. Most incredible of all, Andy Carroll has managed 227 minutes, logged two assists, and even lasted 72 minutes after starting against Sheffield United. Has the world gone mad?

Yes. Of course the world’s gone mad. Have you been on Twitter lately? But what’s happening on Tyneside isn’t really madness, just a combination of consistent tactics, strong motivational skills and the right amount of luck. Is it sustainable? Probably not. But they’ve had precious little good news in that quarter for some time, and I for one am going to revel in it while it lasts.

A decade ago, when he was at (whisper it) Sunderland, Bruce was famously quoted as saying “I’m not really into tactics”. And he’s still not, at least not in the complex sense of Graham Potter, Eddie Howe and Chris Wilder, to mention only English managers. But he understands how to organise a defence, and after experimenting in the early matches, and falling as flat as you would from 90 stories, he settled on a no-frills 5-4-1 counter-attacking scheme.

But not just any 5-4-1 counter-attacking scheme. This is extreme defensive football, the kind of thing Italian managers fantasise about, and that even Rafa Benitez only occasionally employed. Right now Newcastle are averaging 38.3% possession, which would be the lowest ever recorded in the Premier League. Or Serie A, for that matter.

But this isn’t cynical stop-them-any-way-you-can stuff. It’s disciplined, too. Newcastle are 15th in tackles and absolutely last in fouls committed. It’s as simple as it gets. They defend.

Ask Bruce, and he’ll say this isn’t the way he wants to play. But when his early-season tinkering failed, he must have realised he had to build from the back. He’s gone a bit far, perhaps, but in for a penny, in for the national debt, as they say.

For this sort of thing to succeed, even for a short time, you need solid defenders. Fortunately, that just happens to be the one place where the squad is deep. Even though injuries have sidelined various players at various times, the corps of Federico Fernández, Jamaal Lascelles, Ciaran Clark, Paul Dummett and Fabian Schär have performed pretty well, and Florian Lejeune hasn’t even featured yet. None are in the Van Dijk class, and each has his weaknesses, but they’re all decent players who at their best can be very good indeed. (And yes, that does include Paul Dummett.)

A 38.3% side also needs a good keeper, and Martin Dubravka fits the bill. Paul Riley’s shot-stopping ratings put him comfortably in the top half of the league, ahead of more celebrated names like Ederson, David De Gea, Tom Heaton and Jordan Pickford. He’s also saved the side’s bacon the last couple of matches, as we’ll discuss below.

A bonus has been the strong play of Javier Manquillo at right wing-back. DeAndre Yedlin can be exciting going forward, but he’s no defender, and in recent matches Manquillo has naturally been preferred. He gets forward on occasion, even into the box once in a while, and nailed a deserved assist on a classic cross. But mainly he stays in the back line and does the same competent job as the rest. On the other side is Jetro Willems, who despite an error last Sunday against Southampton, has been equally useful in defence, and much more dangerous in attack.

But before we get to the attack – such as it is – we need to look at the midfield, and specifically Jonjo Shelvey. After dreadful performances early in the season, he’d been consigned to the bench, to deafening sighs of relief from the supporters. It looked as if he’d be a bit-parter again, maybe forever.

But a funny thing happened on the way to oblivion. Sean Longstaff got red-carded, and everyone’s favourite Dr. Evil impersonator got into the swivel chair again. It figured, really: for a side designed to counter-attack at pace, a Shelvey’s just the thing.

What didn’t figure, though, is that he’d become a goal machine. His all-time season high is six, all the way back in 2013/14 with Swansea. This year he already has five, including four in the last six matches. Jonjo Shelvey, he scores when he wants: from long range, close in or with an assist from VAR. On Sunday against Southampton he even got the equaliser on a header – the first league headed goal of his career.

It’s great that Shelvey is scoring for fun, but it’s not great that his five goals are streets ahead of everyone else in the squad. You may have heard, in fact, that Newcastle’s three regular attackers have only two goals between them.

The struggles of Miguel Almirón and Joelinton have been fairly well chronicled. Neither is playing in his best position, both suffer from limited attacking chances, and both are cosmically short of confidence. Joelinton in particular just can’t get it right, and although I think there’s a decent player in there, this doesn’t seem to be his kind of system. The reason Andy Carroll actually got to start a match is that the Brazilian has been well below substandard.

But the third guy? Now we’re talking. It’s Allan Saint-Maximin, instant cult hero. Being French, he might have heard the expression ‘plus royaliste que le roi’, which in English is ‘more Adama Traoré than Adama Traoré ever was, if you can believe that’. It’s a shame Gary Neville made his celebrated Playstation remark before Saint-Maximin came on the scene, but to be honest I think technology is at least 20 years away from simulating the Frenchman’s moves.

Never has a player been more thoroughly made for a system, or at least the attacking part. He takes off as soon as Newcastle get possession, receives the ball on the counter and freestyles. Right now he’s at a potential league record 9.8 attempted dribbles/90, easily a career high, and astonishing for a team that rarely has the ball. (Traoré, far more disciplined these days, is at 7.0, and even last year finished only at 8.1.)

Defence? To be as polite as possible, Saint-Maximin has absolutely no idea what he’s doing. Literally. He never seems sure exactly where to go, presses at random and spends a lot of time watching the remaining 21 players shuttle around the pitch. But that’s all part of his charm, and besides, the ten other guys on his team seem to be doing just fine.

Alas, the floor show may be cancelled for a while. He’s been asked to play through a painful ankle, and hobbled off at the end of Sunday’s match with a hamstring pull. Bruce was kicking himself afterwards for not resting his player. If Saint-Maximin is out, three-quarters of Newcastle’s fun quotient goes with him.

But strangely enough, not the goals and assists, at least not statistically. Saint-Maximin’s one goal came on the unlikeliest of finishes, a header in the box – like Shelvey’s, his first ever in league play. He has no assists at all. But his gyrations are so exhausting that defenders tire out just watching him, leaving Jonjo and anyone else in the vicinity to finish. He will be significantly missed.

A note on Carroll. It’s an old chestnut, but his presence does seem to lift the team. He puts himself about in time-honoured fashion, dominates in the air and knows exactly what he’s supposed to be doing and where. In the start against Sheffield United, his cross for Saint-Maximin’s early goal allowed Newcastle to sit back all the more. Three days later his introduction helped turn the match against Southampton, even without his lovely cross for Shelvey’s header.

For me Andy Carroll today showed what being a centre forward is about. Changed the game.

Physical, strong in the air. Put himself all over. Can’t see how Joelinton game will improve to show that kind of presence #NUFC

Talking about Carroll brings us to motivation. One hesitates to say ‘passion’ but this is quite obviously a side that are all behind the manager. After they went down to ten men and were embarrassed by Leicester City, something clicked, quite possibly Bruce’s hairdryer. Since then, although performances may have been irregular, heads haven’t dropped for a moment. In their last three home matches, they’ve gone from 0-1 to 2-1 against both Bournemouth and Southampton, and come from behind twice to draw with Manchester City.

But the dice will eventually stop coming up sevens. Five of those six goals came from set-pieces or the aftermath of set-pieces. Unless you’re managed by Tony Pulis, you can’t keep doing that forever. And as well as the defence are playing, they’re under too much pressure for too long, and have needed Dubravka to bail them out on a regular basis. If he hadn’t made two top-class saves against both Sheffield United and Southampton, you wouldn’t be reading this now.

Even the best of the defenders can wilt when given scant relief. Take Fernández, for example. Since replacing Fabian Schär on the right of the three, he’s been masterful. But against Sheffield United it was he who lost Oli McBurnie and had to be saved by Dubravka, and against Southampton it was he who lost Danny Ings and didn’t get saved at all. Eventually something will give.

The numbers agree. For all the great results, Understat still have Newcastle United with the worst xG/xGA difference in the league, just behind Norwich City. Statsbomb also have them in last place, well behind West Ham United.

But every season someone somewhere beats the odds. Expected Goals are pretty accurate over the long term, but 38 games is short-term enough that teams can significantly over-perform. And why not Newcastle United, even managed by a guy who’s not really into tactics?

So you can say Bruce has been lucky, or you can say he’s made his luck by fostering a clear identity and a fighting spirit. Either or both, it’s been most gratifying to watch. But beware: you can beat the odds one season, but you almost never do it twice in a row. With 22 points in the bag and a cool 11th place spot in the table, Newcastle are heading for safety. But survival this year won’t help them one bit the next. If S. R. B. is still behind the big desk come next August, and Mike Ashley is still doing his Smaug act, don’t be surprised if they’re one of the favourites to go down again.