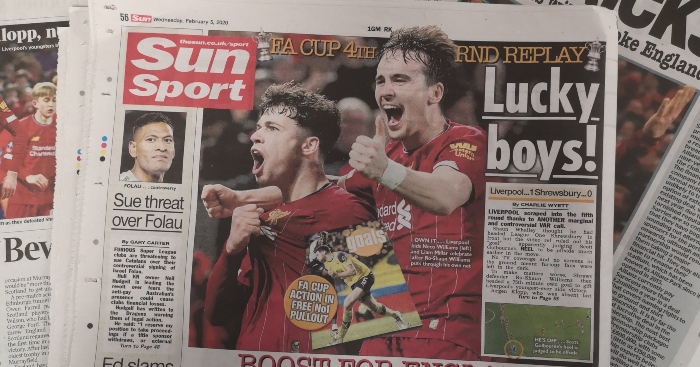 So VAR away from me…
The Daily Mirror tell us that Liverpool’s youngsters ‘did it in style’, the Daily Mail opt for a back-page headline of ‘NO JURGEN, NO PROBLEM’ and The Times show that there is no such thing as an original idea with ‘No Klopp, no problem for kids’. And so we turn to The Sun, fully committed to being a parody…

Apparently, ‘LIVERPOOL scraped into the fifth round thanks to ANOTHER marginal and controversial VAR call’.

Oh and as for ‘marginal and controversial’, read ‘correct’. This negative language surrounding VAR is really not helpful at all. What actually happened at Anfield is that an offside Shrewsbury goal was correctly ruled out for offside; Mediawatch looks forward to the day when the decision-maker is irrelevant as long as the decision is correct. Which it absolutely was.

But that would be no fun, would it? Not when The Sun’s Charlie Wyett can unashamedly refer to the Premier League champions-elect and reigning European champions as ‘LiVARpool’ as if he was writing for his favourite Norwich forum instead of the nation’s biggest-selling (except in Liverpool) newspaper.

Lucky and sweep
Charlie Wyett on the back page of The Sun: ‘LIVERPOOL scraped into the fifth round thanks to ANOTHER marginal and controversial VAR call.’

Charlie Wyett on the inside pages of The Sun: ‘On the balance of play, it was no more than Liverpool deserved…they will forever be remembered as the youngest team in Liverpool’s history, who still swept their team into the fifth round of the FA Cup.’

Can you ‘scrape’ and ‘sweep’ at the same time? It sounds like something only a midwife should do…

New Pog, old tricks
If you thought the name of the Shrewsbury own goal scorer was familiar, it’s because 18 months ago he was being billed as the ‘new Paul Pogba’ by Manchester Evening News man and Mediawatch favourite Samuel Luckhurst.

Underdog days are over
Liverpool’s talented kids playing a struggling League One side confused the hell out of the Daily Mail‘s Martin Samuel. But how clever to position himself so that any result was a victory for the magic of the FA Cup…

‘For once, nobody knew how it would go for Liverpool. Not this Liverpool. Against a League One side, they would even have been the underdogs. Then came a victory for a gutsy team of teenagers. A fifth-round place for a band of little brothers.’

Pesky fact: They weren’t the underdogs; they were the odds-on favourites to win.

Rival fans complaining about our Liverpool kids beating Shrewsbury and still somehow manage to bring VAR into the conversation. Obsessed clowns the lot of them. #LIVSHR pic.twitter.com/GtVSOWJBQ5

And thus an enraged Samuel writes:

‘It was one of those moments that do not get repeated when you are the underdogs. That was their chance to score at Anfield.’

Fortune favours the rave
The Mirror watched Liverpool’s underdogs beat Shrewsbury’s underdogs and learned five things. One of them was about VAR and the way it came ‘to the kids’ rescue’…

‘Plenty of fans around the country believe that Liverpool have got the rub of the green when it comes to VAR this season in the Premier League.

‘And now their kids have had their slice of good fortune too!’

Oh those boys really are ‘lucky’ after all….

‘There’s no doubt Shrewsbury frontman Shaun Whalley was offside when he headed home from close range, but before the days of VAR the underdogs would’ve been dreaming of an upset.’

Yes indeed. How lucky are Liverpool that incorrect decisions are no longer allowed to stand?

Break time
Headline on the MailOnline football homepage: ‘James Milner played a ‘crucial role’ in Liverpool’s FA Cup victory over Shrewsbury as he SNUBBED chance for a winter break to help Neil Critchley’s kids prepare and give them a pre-match pep talk’.

What a hero. But you should probably know that he is injured so had pretty much no choice but to remain on Merseyside for treatment.

Simple Steve
Amid the media clamour to award Jordan Henderson the PFA Player of the Year award, the Pulitzer prize and the best supporting actress Oscar, history is being hastily re-written, not least by Tony Evans in the Independent:

‘Right from the beginning there was a misapprehension about why Henderson was signed from Sunderland for £20 million nine years ago despite internal opposition at Anfield. The simplistic viewpoint is that he was bought to replace Steven Gerrard, whose career was slowly on the wane in 2011.’

And from where might people have picked up this ‘simplistic viewpoint’?

We think we may have found the culprit: