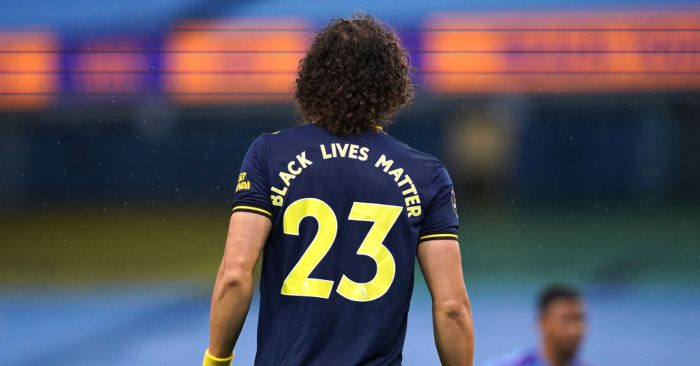 David Luiz insisted on speaking to Sky Sports to accept the blame for Arsenal’s 3-0 defeat at Manchester City.

Luiz was left out of the starting XI for the clash at the Etihad amid speculation about his future; his current contract expires on June 30.

But he came off the bench after an injury to Pablo Mari and in 27 disastrous minutes he made a mistake for Raheem Sterling’s opener and was then sent off for giving away a penalty for City’s second.

Luiz appeared in front of the Sky Sports cameras after the game and said: “It was not the team’s fault, it was my fault.

“I take the decision to play, I should take another decision the last two months but I didn’t.

“Today I think the team did well, especially after they went down to 10 men. The coach is amazing, all the players did amazing, it’s just my fault.”

Asked to clarify by Geoff Shreeves, Luiz said: “I should have taken a different decision, in the last two months and I didn’t.

When pushed again about whether he actually wanted to stay at Arsenal, Luiz said: “A different decision, to decide to try to decide my future, to try to decide as early as possible but I didn’t. I don’t want to use that as an alibi or an excuse. It’s my fault and that’s it.

“That’s why I said to the players [after the game], “nobody needs to speak”, I need to show my face and be here. So, I want to stay. The coach knows. The coach wants me to stay. We are waiting for the decisions.”