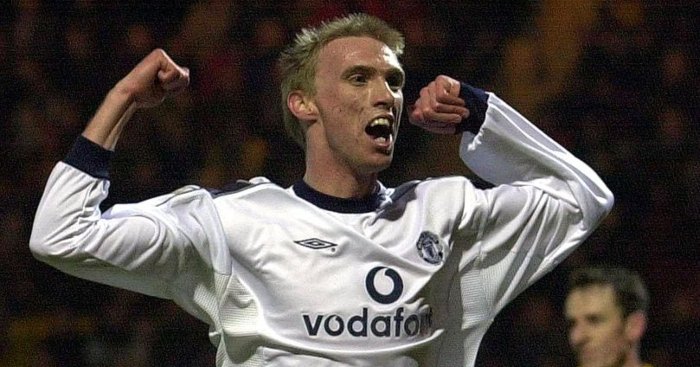 Former Man Utd player Luke Chadwick says he holds “no grudges” with Nick Hancock or Gary Lineker after they apologised over the torment he faced during his career.

Broadcaster Hancock yesterday said he is “appalled” at himself  after Chadwick opened up on the abuse he received from his TV show.

Hancock was speaking as a former host of the BBC panel show ‘They Think It’s All Over’, which Chadwick has said he used to “dread”.

The show would make fun of Chadwick‘s appearance as he was breaking through at Man Utd and, 20 years on, the now 39-year-old has spoken about the effect the mocking had on him.

“In the end, it lowers your self-esteem a lot,” he told the BBC. “That’s all I’m known for and spoken about – the way I looked. That isn’t right.”

A two-time Premier League winner with Manchester United, Chadwick added of the show: “I became a picture of fun, and that was probably the hardest thing. A popular TV show – [the attention] was magnified, so that’s what I was seen as by everyone off the back of that.

“I used to dread it coming on the telly. I wouldn’t watch it but then I’d get a text off someone saying ‘oh you’ve been on that show again’ as if it was a joke.

“Obviously people were finding it funny, but it was eating away at me a bit inside while that was happening.”

Former footballer Lineker had also joined in the jokes during his time on the show and he issued an apology too.

I was part of that show, therefore, I too would like to apologise to @luke_FFF for any hurt caused. https://t.co/RcP9TXMtZT

However, Chadwick doesn’t want the likes of Hancock, Lineker and others to now face abuse themselves with the former Man Utd man saying he has “no grudge” towards them.

Chadwick told talkSPORT: “That was probably the thing that made things worst because it was such a popular TV program.

“It was on a Friday night and obviously the football was on the Saturday and it was fresh in people’s minds.

“Obviously it was tough at the time but it was 20-odd years ago, I’ve got no grudge towards any of these people.

“If I was more free to speak about my emotions or whatever back then, then probably if they knew how much it was affecting me, I’m sure they would have stopped.

“I’m sure they’re all good enough people to not want to see a young lad feel like that, but it’s what happened and there’s no change in that now.

“I just don’t want these people 20 years down the line to get a load of criticism for it.”