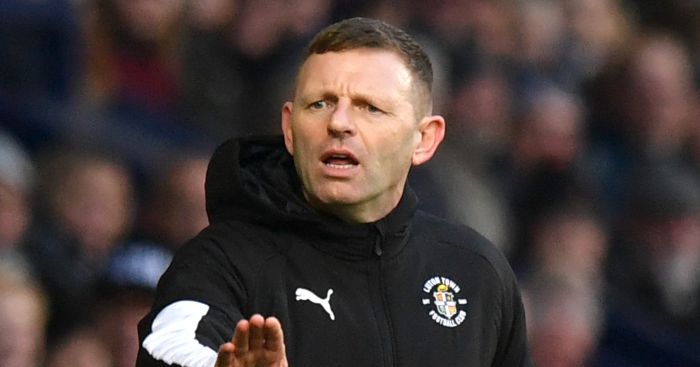 Roll back the years, less than half a decade ago, and ask any Luton Town fan whether they would be happy to be playing in League One. The answer would invariably and resoundingly be positive. Fast forward to the current day, and an instant return to the third tier seven years after playing non-league football seems such an avoidable travesty.

Another defeat at the weekend to manager Graeme Jones’ former employers West Brom was equally preventable in its mistake-ridden nature. And if it was not the final nail in the Bedfordshire club’s campaign, it is fair to say the coffin is being prepared and the Hatters’ collective corpse measured to size

By comparison with the death knell that befell the Kenilworth Road club at the turn of the last decade with relegation from the Football League, dropping down from the Championship would not be the end of the world.

But there is so much that could have been done differently to ensure their League One title under the tutelage of first Nathan Jones, and then Mick Harford in the home straight, provided more than a brief sojourn to the second tier.

The summer-long courting of current incumbent Jones – who had previously turned down the role to replace namesake Nathan midway to continue his own coaching role at the Hawthorns – suggested this was a manager who could deliver what very few others could. And that needn’t necessarily be a case of winning games and getting results.

For a club like Luton, to have been where they have been and experienced what they have experienced over the last ten years, keeping the club and fans united is just as important as picking up a regular batch of points each weekend. But this season, for these mad Hatters fans, neither wins nor harmony have emanated; it is far from Wonderland.

Jones has proven to be a divisive figure in the stands. Some see his non-defeatist attitude as a throwback to his predecessor, with many more perceiving it as arrogance. Given Luton have lost two-thirds of their matches this season, are seven points adrift of safety and have conceded at least nine more goals than any other side in the league, conceitedness has become the common consensus. It is not a look which suits either club or manager well.

But how have the League One champions – who won the third tier at a canter, no less – become quite this apathetic a level above in a relatively low-quality Championship season?

As ever with a promoted side punching above their recent weight, the juicy parts were picked apart by the higher league vultures, most notably young full backs James Justin and Jack Stacey departing for Premier League pastures new, while a host of new signings made their way through the Kenilworth Road doors.

To suggest they were ‘doing a Fulham’ would be wide of the mark, but somehow Luton were signing players of, if not a lesser calibre than the ones who excelled a league below, then certainly those who did not warrant more than a squad place or suit the system quite as effectively. Hindsight is not required to see that a 33-year-old Martin Cranie operating out of his usual central-defensive berth replacing Stacey down the right-hand side is a mistake.

Throughout the promotion campaign, even through the managerial change in January, Luton’s strengths lied in consistency, in a settled squad and a clear starting XI. Fast forward to the current run of two wins since late November and you find an ever-changing, perennially rotating squad, no combination of which is good enough to secure results at this level.

It is perhaps between the sticks where the biggest loss has been felt. Keeper James Shea was a great first-choice last term, keeping 19 clean sheets in 41 appearances and conceding less than a goal a game across the season. With an ageing strikeforce that has enjoyed little previous success at this level and the loss of crucial full-backs with surnames that would suit a high school prom king and queen, spending a club-record fee on a new shot-stopper seemed inadvisable and largely pointless.

So where do they go from here? Seven points adrift of safety and with confidence shot, a defence shipping goals for fun and a misfiring attack, survival is becoming more and more a pipe dream with every passing defeat. To suggest that Jones cannot succeed would be ridiculous and premature; one season doth not a summer make. But the months-long chase to acquire his services would imply there was more to him than Luton are currently getting.

There is, of course, a clamour from some – mostly external – quarters to bring back Nathan Jones. He’s been gone too long, after all. But looking back is not the way forward. Be it under Nathan or Graeme, Luton are not keeping up with the Joneses. Relegation needn’t necessitate another managerial change. The current incumbent a young manager who should be given the opportunity to learn from his mistakes. So too, now, must Luton Town.