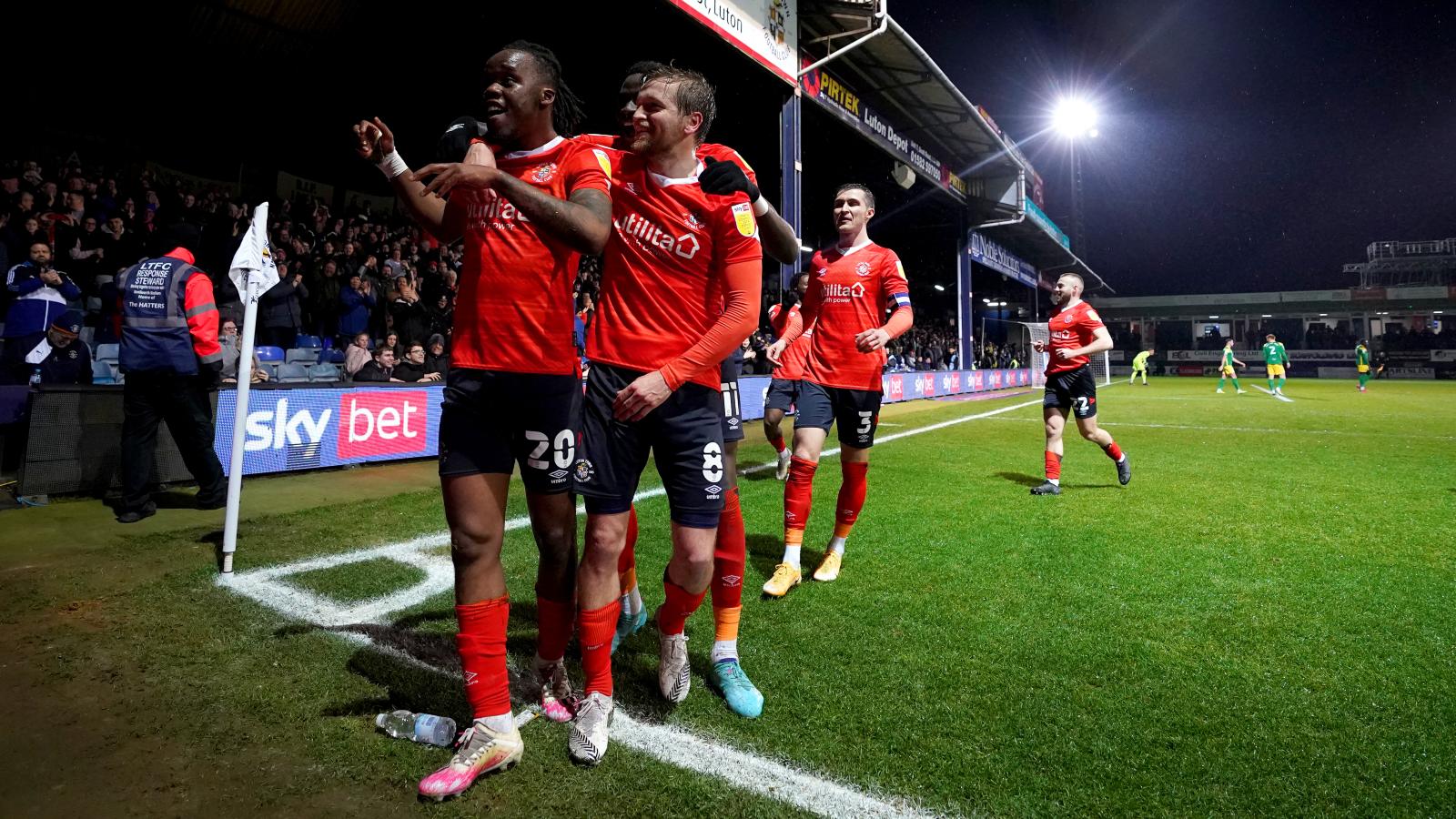 Luton Town in the Premier League? Stranger things have happened in the Championship…

Luton Town
Anyone who thought Luton might have just reached the limit of their promotion challenge going into Wednesday’s tussle with Preston on the back of three defeats from their last four games in all competitions is unaware of the fighting spirit within this Hatters team. It is one thing to note the character Nathan Jones has instilled, but results like the 4-0 demolition of Preston go beyond that. Having lost to QPR last time out, it would have been easy to accept they had reached their ceiling, lick their wounds and go again next season.

Instead, with a handful of their promotion rivals going head-to-head this midweek, Luton took full advantage of dropped points elsewhere to propel themselves up to the heady heights of fifth with one of the most complete and dominant performances of their season. Of all the victories they have achieved this season, few have been as simple as this, a game effectively over by half-time with the three-goal advantage owing much to Luke Berry’s electric double. Anyone who is still writing Luton off is doing so at their own peril; they have as much chance as any of their contemporaries.

Ryan Yates
In the same week the formerly much-maligned youth academy graduate signed a new long-term deal to stay with the club until 2025, combative midfielder Yates scored the winning goal that breathed new life into Nottingham Forest’s short-term ambitions of returning to the Premier League. If Steve Cooper has worked wonders in turning a team that took one point from their first seven games of the campaign into genuine promotion contenders, then transforming Yates into such an important part of that set-up has been nothing short of a miracle.

Not renowned for his goalscoring prowess, Yates finished smartly to make it 2-1 in a game Forest had trailed, either side of Djed Spence’s stunner and Brennan Johnson’s victory-confirming strike. If Forest go up, Yates has what it takes to succeed at the top level in this system and this team. Who would have thought that six months ago?

Benik Afobe
Afobe’s career had long since stalled in England due to an unfortunate mix of personal tragedy and injuries on the pitch prior to rocking up at Millwall. But the former Huddersfield striker has had a new lease of life in the capital, and duly punished his former employers in scoring both goals to inflict a first league defeat of 2022 on Huddersfield while keeping his current side’s play-off hopes alive.

A fifth clean sheet in a row in an eight-match unbeaten run has taken Gary Rowett’s side just two points off sixth. If they do the unthinkable, Afobe has been one of the most important cornerstones of what is fast becoming a memorable campaign beneath the Shard.

Cardiff City, looking up
Through the first half of the season, Cardiff and Stoke were headed in very separate directions. Stoke harboured aspirations of the play-offs while the Bluebirds fended off relegation worries without much confidence.

A 2-1 victory for the Welsh side took Cardiff level on points with Stoke. With Championship football all but guaranteed for both next season, these are two clubs headed in very different directions.

Barnsley’s set-pieces
Two goals scored from two set-pieces leave Barnsley two points off safety. With fewer than 10 games remaining, Barnsley have found safety back in their own hands thanks to two first half goals against ever-inconsistent Bristol City. The Tykes’s recent revival – they have won four and lost just two of their last eight games – see’s Poya Asbaghi’s side sit just a couple of points below Reading either side of the dotted line.

With a home fixture to come against the Royals at the start of February, Asbaghi and Co. know their destiny is back in their own hands just weeks after they looked doomed, as they have done for much of the season. The key to staying up will be in continuing to make the most of set-pieces. Both goals on Tuesday night came from corners while the opener against Fulham came from the penalty spot, and Barnsley have exploited other teams’ weaknesses at defending set-pieces on multiple occasions during a revival which followed six straight league defeats.

In what is looking like being a fight to the finish for 21st between Barnsley and Reading, those set-pieces could be the difference for the men from South Yorkshire.

Middlesbrough’s loan rangers
The January acquisitions of strikers Folarin Balogun and Aaron Connolly from Arsenal and Brighton respectively were seen as a game-changer for Middlesbrough. And while Chris Wilder’s side have not needed them to be key, there is still relief in seeing both coming good on their promise and pedigree.

Both players scored just the second goals of their Boro loan spells, but in doing so, handed Middlesbrough a first away win of 2022 and propelled the Teessiders back into the top six. Crucial goals are going to prove just as important as gluts of them if Middlesbrough are to maintain a play-off spot come May.

Scott Wharton
At half time, Blackburn must have been fearing the worst. Having failed to score in 10 of their last 14 Championship matches, Rovers trailed Derby 1-0 at the break in what looked like becoming another bleak night in front of goal for the inexplicable promotion chasers. If ever there was a good time to score your first of the season, Scott Wharton timed the equaliser to perfection, netting early in the second half to quell fears of another blank night in front of goal.

And whatever Wharton could do, more regular goalscorers Tyrhys Dolan and Sam Gallagher proved they could do equally as well, steering Blackburn to what could be an important win in staving off the handful of teams below vying for the play-off spot they still hold despite such a bizarre run of form this calendar year.

Tom Ince
A point on the road to Bournemouth is not to be sniffed at. The gap to Barnsley has shrunk once more, but Tom Ince’s late strike meant it is two points rather than one as looked like being the case all evening. Also, keeping your dad in a job is always fodder for an extra present or two at Christmas. None of that modern shite though.

Orjan Nyland
The Norwegian goalkeeper had played just once in the Championship for Bournemouth, keeping a clean sheet against Hull in August. Against his brief former employers, Nyland couldn’t quite match those exploits, but made a number of saves to keep the deficit to one before Ince’s late strike made it worth it.

CR7
It was a bad night for Cristiano Ronaldo, but the real CR7 stood up to the plate. West Brom’s number 7 Callum Robinson proved the difference against league leaders Fulham with a smart finish. Ballon D’or incoming?

Peterborough United, not doing enough
They huffed and they puffed, but still they could not blow the house down. Another late collapse at London Road saw Peterborough walk away empty-handed from a game they should have at least taken a point from when in reality they needed all three. Home games against mid-table sides like Swansea are as close to a guarantee of points as you will get at this stage of the season.

Yet with everything to fight for against opponents with little to lose either way, it was Swansea who looked like they wanted it more, resulting in Joel Piroe’s last-minute winner having been 2-1 down with 20 minutes to play. If the skillset in this team is questionable to survive at this level, the temperament and psychology to succeed is undoubtedly not there. The Posh are seven points adrift of Reading with a far inferior goal difference. A miracle is needed.

A missed opportunity for Coventry
With Blackburn, Luton, Middlesbrough, Nottingham Forest and Millwall all winning this midweek, a victory for Coventry was needed to keep pace with the batch of teams fighting for a finite number of play-off spaces. A home fixture with lowly and out-of-sorts Hull should have represented one of the easiest fixtures of the run-in for Coventry. Instead, two early goals saw this become one of the few home games back in the city that hasn’t provided moments of joy and ecstasy. If they harbour ambitions of making the top six, they can’t afford any more slip-ups of that nature.

Stoke City, looking down
Through the first half of the season, Cardiff and Stoke were headed in very separate directions. Stoke harboured aspirations of the play-offs while the Bluebirds fended off relegation worries without much confidence.

A 2-1 defeat for the English side left Stoke level on points with Cardiff. With Championship football all but guaranteed for both next season, these are two clubs headed in very different directions.

Bristol City’s same old problem
How many times have we been here? Bristol City have won 12 of their 37 Championship games this season, a modest albeit uninspiring return. They have conspired however to make sure those dozen three-point hauls have not been back-to-back. Every time it seems like the Robins may be going somewhere, there is disappointment ahead. Travelling to relegation-threatened Barnsley gave Nigel Pearson’s side a good opportunity to pick up three points in consecutive games for the first time. Instead, it was all over after 21 minutes. Nobody is surprised.

Lee Bowyer
This is going to be a drab end to the season for everyone connected to Birmingham. The basic form table proves that a 2-0 defeat to promotion-chasing Middlesbrough shouldn’t have come as a surprise. So while this was a Middlesbrough side without an away win this year, it was likely to change sooner or later. It should not have been quite this easy though.

Birmingham looked the epitome of a team on the beach. Given it is only mid-March, Birmingham manager Bowyer would be well advised to get his players looking up to the task ahead of keeping the fans on side. A disappointing campaign on and off the pitch needs at least a couple more moments of joy to avoid dejection beyond the summer. On Tuesday night, there was absolutely none.

Scott Parker
Dropped points at home to Peterborough and Reading in the space of a week. Scott Parker is still looking likely to deliver promotion, but there must already be doubts about his ability to lead Bournemouth through a Premier League season against much tougher opposition every week.

A rare bad week for Fulham
From a team who have likely secured promotion to one who have done everything but. It is a matter of when, not if, for Fulham. But the former question is going to be delayed for as long as they are picking up a single point from fixtures against Barnsley and West Brom.