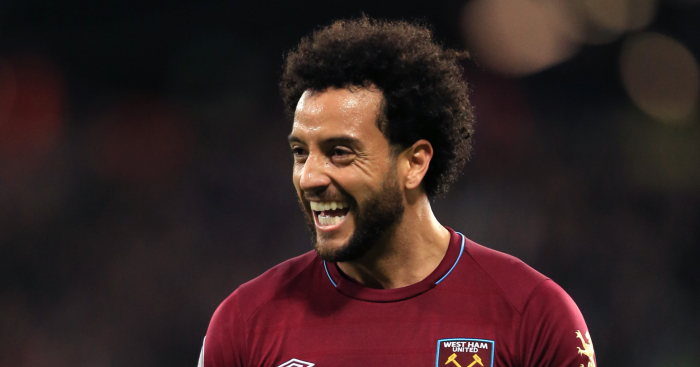 Aaron Wan-Bissaka is an excellent defender. Just ten months into his professional career, the 20-year-old has established himself as the archetypal modern-day full-back: one just as effective going forward as he is staying back, perfectly capable of winning one-on-one battles at either end of the pitch.

His star has burned briefly but ever so bright in the Premier League, not even dimming when up against Dele Alli on his debut, nor Alexis Sanchez in his second game. He has also faced Willian, Sadio Mane, Ryan Sessegnon, Pierre-Emerick Aubameyang, Lucas Moura and Anthony Martial, with no seasoned, multi-million-pound forward able to get the better of the Crystal Palace youth product.

That was until Saturday. In his first 15 Premier League games of the season, Wan-Bissaka was dribbled past just three times. In 83 minutes at the London Stadium, Felipe Anderson alone dribbled past him twice. The apprentice had finally been mastered.

It was Anderson’s sixth goal in his debut campaign in English football, yet it still felt like a watershed moment. After initial struggles saw him score just one goal in his first ten games, he now has five in his last six. A corner has been turned. The touchpaper has been lit. A potential cult hero has been accepted and embraced by a fanbase that can be notoriously difficult to win over.

Not since Dimitri Payet have West Ham had someone so capable of thrilling and captivating the support. Manuel Lanzini is still the only player to create more Premier League chances for the Hammers than the Frenchman since the start of the 2016/17 season, despite Payet having left in January 2017. Marko Arnautovic has shouldered the goalscoring burden, but a more central role has replaced much of his unpredictability with functionality. Mark Noble and Pablo Zabaleta are the reliable, experienced old hands, yet stability is not sexy in football.

In Anderson, they finally have a player who can capture the imagination again with a single swing of his foot, a magician able to conjure a moment of inspiration from thin air. In a sport where style versus substance is a constant point of debate, the Brazilian eliminates the need to choose one or the other.

That, in itself, separates him from Payet. He might seem like the Frenchman’s spiritual successor but he is so very different. Anderson is not that same individualistic talent, that luxury player who must have a team built around him to thrive. He is the anti-stereotype: a uniquely skilful South American with steel to match. In fact, he has already made more tackles in the Premier League this season (39) than Payet managed in his entire West Ham spell (33).

Only two Premier League players have both made the most tackles and created the most chances for their respective clubs this season. As Wolves’ central midfielder, Joao Moutinho is in the perfect position to both start and halt attacks. But for a forward such as Anderson to post such numbers is remarkable. He is West Ham’s very own all-tackling, all-creating team player.