Home All The News ‘LVG touched my head and said: “Why don’t you respect me?”‘ 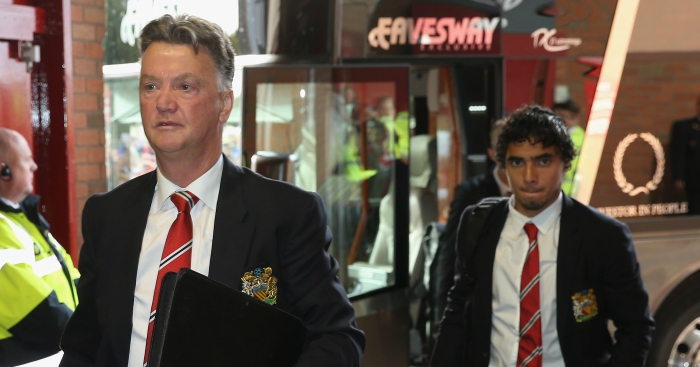 Louis van Gaal was an absolutely monumental d*ck to Rafael at Manchester United, according to Rafael.

Van Gaal was appointed United manager in summer 2014 as the permanent successor to David Moyes.

The Dutchman was a largely unpopular figure at Old Trafford, not least with former full-back Rafael.

The Brazilian had been a loyal servant to the club since he arrived in 2008, but was unceremoniously dropped from the first team in Van Gaal’s first season and sold the subsequent summer.

Rafael has explained just how far Van Gaal went to be a bit weird.

“When it was announced that Van Gaal was taking over, four or five people, including players, called me to say that he doesn’t like Brazilian players,” Rafael told ESPN. “They pointed out what had happened with Rivaldo at Barcelona, but I didn’t believe it.

“In his first season, Van Gaal called me to his office and said: ‘You can leave.’ The meeting lasted one minute. That was it: ‘You can leave.’ It took time for me to go, but I was desperate to leave when I did, and that saddens me because I loved everything about Manchester United.

“Van Gaal is not a bad coach, but I didn’t like his character. One day, I was in the canteen waiting to eat. Van Gaal used to speak to us after we’d eaten each day. I had a head injury after a game at Yeovil – one of the few games I played in that season – and I was touching my injury. After three or four seconds, he touched my head and said: ‘Why don’t you respect me?’

“I stood up and said: ‘I always respect you. I’ve never said anything which was disrespectful to you.’ I am a patient guy, but I got angry then. I had done nothing wrong.

“Antonio [Valencia] later said to me: ‘You’re not going to play again.’ Players didn’t speak back to Van Gaal. Antonio was almost right; I barely played again. I love Manchester United, but I was so desperate to leave United. Only one man did that because I liked everything about the place. I couldn’t handle him anymore.

Van Gaal only angered Rafael further when he contacted the full-back after selling him to Lyon in August 2015.

“Van Gaal texted me to say: ‘You know how football is.’ I couldn’t believe it. He didn’t speak to me and then texted me to wish me well.