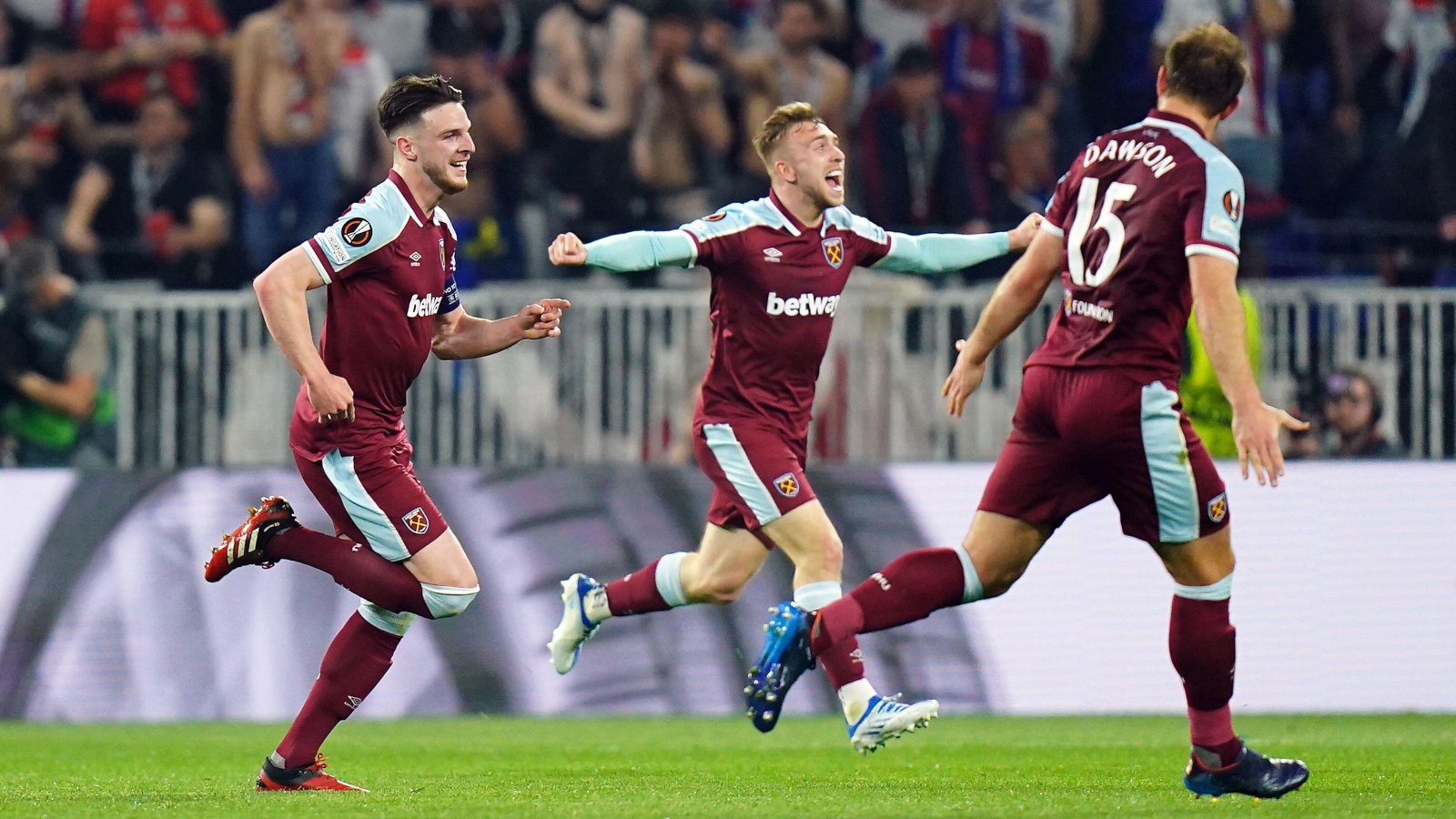 West Ham are in the semi-final of a European competition for the first time in 46 years after a 3-0 second-leg win secured a 4-1 aggregate victory over Lyon.

David Moyes’ side were big underdogs heading to the city overlooked by the French Alps following last week’s 1-1 draw at the London Stadium.

Hammers make their mark on an extraordinary week of European football

But it was hosts Lyon who were left with a mountain to climb after two goals in seven minutes at the end of the first half from Craig Dawson and Declan Rice put West Ham in control.

When Jarrod Bowen made it 3-0, and 4-1 on aggregate, Lyon heads dropped as the price of flights to Frankfurt rocketed – Eintracht Frankfurt having shocked Barcelona in their last-eight clash to reach the last four and book a meeting with the Hammers.

That showdown will coincidentally be a repeat of West Ham’s last appearance in the last four of a major European semi-final, in 1976.

In fact, this memorable victory took place 40 years ago to the day since Trevor Brooking, Billy Bonds and company stunned the Germans 3-1 in the second leg at Upton Park to reach the final.

West Ham have already enjoyed a remarkable season having remained in the fight for the top six while topping their Europa League group and then sending six-time winners Sevilla packing.

This looked another huge task for Moyes’ side, however, against another team with serious European pedigree who only 18 months ago knocked Manchester City out of the Champions League.

As if the job in hand was not difficult enough, Moyes was forced to name a makeshift defence shorn of Kurt Zouma through injury and Aaron Cresswell due to suspension following his red card in the first leg.

The new-look back four was almost breached after only five minutes when Lyon forward Karl Toko Ekambi smacked a shot against the foot of Alphonse Areola’s near post.

Yet West Ham were able to gradually take Lyon’s sting out of the game, and with their first attack Pablo Fornals tested stand-in goalkeeper Julian Pollersbeck, in for injured first-choice Anthony Lopes, from the edge of the area.

Midway through the first half some patient West Ham build-up play saw Michail Antonio chip in a cross which Bowen, at full stretch, could only jab into the side-netting.

But it was centre-half Dawson, the £2million signing from Watford who has become something of a cult figure during West Ham’s European adventure, who enhanced his reputation further seven minutes before half-time.

After Bowen’s shot had deflected off Jason Denayer for a corner, Fornals whipped in a near post cross and Dawson ploughed in front of Moussa Dembele to crash his header home.

The Hammers went 2-0 ahead, and 3-1 up on aggregate, moments before half-time when a poor clearing header from Emerson fell to Rice 20 yards out.

The England midfielder’s shot was low and skidding, and Pollersbeck was beaten by the bounce and a slight deflection off the toe of defender Castello Lukeba.

Bowen, West Ham’s goalscorer in the first leg, fired them into dreamland three minutes into the second half.

Antonio held the ball up before laying off to Fornals, who swept a first-time pass into the path of Bowen.

The England hopeful still had plenty to do, but he threaded a superb finish between the dive of Pollersbeck and the inside of the far post.

Rice, seemingly forever linked with a move to Chelsea or Manchester United, was given a breather two minutes from the end and soaked up the celebrations from the delirious, disbelieving away end, high up at the vast Groupama Stadium.

The 23-year-old could yet fulfil his ambition to play in the Champions League with West Ham next season, were they to go on and win this competition.