Home F365 Features Return of the Macc: Another phoenix rises from avoidable ashes 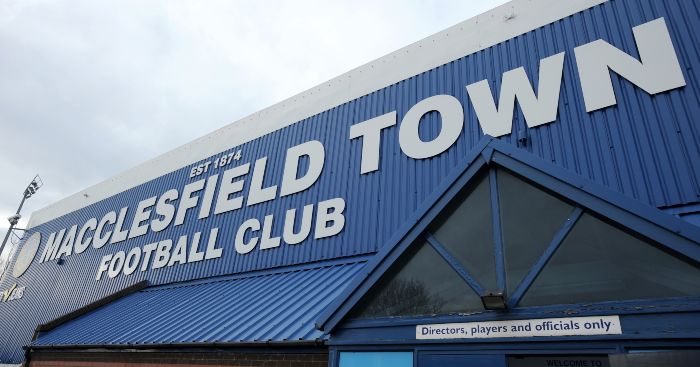 Until very recently, Macclesfield Town were a football club that had only ever brushed the tips of my subconscious.

I knew they existed, of course, the Silkmen, I was familiar with their escape from League Two relegation under Sol Campbell two seasons ago. But it had never occurred to me that this club was, in fact, of great personal significance. That only became clear once it was too late. On the day that Tottenham Hotspur signed Gareth Bale and took on some of his total wage package of £600,000 a week, and in a summer where Premier League clubs spent a combined £1.28bn, Macclesfield Town quietly slipped out of existence.

Indeed, on September 16, 146 years of history came to an abrupt end. Wound up at the High Court over debts totalling more than £500,000 after years of mismanagement under owner Amar Alkadhi, the demise of Macclesfield was stark and complete, and with their liquidation went a bustling part of the community.

This was also a club, as I found out shortly after, that had been deeply intertwined with my own personal roots. Not only was one half of my family from the area, with my Great Grandpa Wilf having been an avid supporter, but remarkably my Great Uncle Eddie had even been on the board as a director.

All of which, with hindsight, made the events of September 16 seem even more tragic.

It was the fans, though, who felt the full weight of the collapse. It seems almost unpalatable to many supporters that one day your club can exist, and the very next it cease to. But that was precisely what happened with Macclesfield Town. And Jonathan Smart, the former chairman of the Silkmen Supporters Trust, was as emotionally invested as anybody. Speaking exclusively to me, Smart recounted the troubling events as the predicament inched closer to breaking point.

“I think it was always a possibility that the club would go bust,” he said. “It was shambolic the way the financial side of the business was run and it’s appalling when you pay players late on a regular basis.

“There was no communication to them; I’d have them contacting me, asking if there was any likelihood they’d be getting paid in the next week.

“Players started to refuse to play games after numerous threats. We ended up fielding our youth team against Kingstonian in the FA Cup first round and the ridiculous thing was, if the players had been paid and ended up playing that game, we’d have beaten Kingstonian who were a team two or three divisions below us.

“The next game would have been against another non-league team and if we had won that, we would have had an away tie against Sheffield United, a Premier League team. I’m not saying it would have filled the ground at Bramall Lane, but the proceeds of that would have probably meant that we survived last season and not end up where we did, out of business.”

And the antagonists behind the turmoil? The Alkadhis.

Assuming control of the club in 2004, years of improper management under Amar and his brother Bashar finally came to a head last season, when three separate penalties led to 17 points being deducted, confirming Macclesfield’s relegation to the National League. The misery didn’t stop there, though, as on that ill-fated day in September – after a winding-up petition had been issued by HMRC – Macclesfield Town were forced into liquidation. Then, just under a fortnight later, the ailing club were expelled from the National League, with Amar Alkadhi stepping down as chairman shortly after.

“Not one of the employees has even been contacted by Mr Alkadhi since the demise of the club,” Smart says. “He’s just disappeared off the radar. But he’s hardly been at the football club over the last year or two and hardly went to games so is it a surprise? No.”

Twenty miles away, as the Macclesfield players packed up their belongings and began the search for a new club, Manchester City were finalising the details of an extravagant £65m raid for the Benfica centre-back, Ruben Dias. His signature took City’s transfer spending over the last decade to an eye-watering £1.42billion. He became the seventh defender to join the club for a fee of at least £40million during the four-year reign of Pep Guardiola.

Macclesfield fans could have been forgiven for wondering ‘what if’ as they enviously eyed their neighbours and pondered the prospect of a tiny fraction of that prodigious transfer fund being donated to save their dying club. But where Smart is concerned, the responsibility was Macclesfield’s and Macclesfield’s alone.

“My view is that each club should cut its coat according to its cloth: each business, whatever industry they’re in, should run the business in a sustainable manner,” he argues.

“So the fact that Tottenham Hotspur signed Gareth Bale on £600,000 a week on the day that we went bust is immaterial to me – it’s a totally different model, Tottenham ran their business so they could afford to do that. Macclesfield Town, though, were unable to be run on a sustainable basis.”

Just as the grass at Moss Rose began to grow long, a saviour materialised. On October 6, local businessman Robert Smethurst acquired the assets of Macclesfield Town Football Club Limited, and from the ashes arose the new phoenix club: Macclesfield FC.

Valued as a connection to the needs and desires of the supporters, Smart has been promoted to the board where he’ll join Smethurst, Carlos Roca (founder of Pro Football Academy), commercial manager Lindsay Brown, Andy Scott, and remarkably, Robbie Savage – the former Premier League midfielder and current BT Sport pundit.

Savage’s zest and hunger for the job appears to have confounded his colleagues, with Smart in particular realising his own preconceptions of the newly-appointed head of football were very much wide of the mark.

“He’s a bundle of energy to be quite honest,” he says. “He’s got lots of enthusiasm and desire to be involved in it.

“My first thoughts were: ‘this is a media personality who wants to order people about’ but that’s not the case at all with him. He’s got a real desire to be involved in the whole process. He really drives it forward and he’s a massive addition to, for want of a better word, the renaissance of Macclesfield Town.”

Savage, along with the rest of the board, will have his hands full over the coming months. Starting a club from scratch is no mean feat, and certainly not a straightforward process. Funds have to be raised, players have to be recruited, and – first and foremost – support has to be garnered. In that regard, though, Macclesfield FC can be grateful that they have had it easier than others.

Bury AFC, founded after the expulsion of Bury FC from the Football League, have long been stricken by a fragmented fanbase. Large swathes of fans have struggled to let go of the original club, which is still actually up and running as a business, and relations between the two parties have been fractious as a result. Where one side believes it is their duty to focus their efforts on reviving Bury FC, the other is striving for a clean slate.

Macclesfield fans were not afforded such a choice. And so, as the foundations are laid down for the phoenix club, the town is as united as ever.

“I think if we do things properly we will attract as many fans as we did last season in League Two whatever league we’re playing in next season,” Smart claims.

As for a target? “To get as high up the leagues as we can in the shortest period possible,” he says. It’s as simple as that.

There is, however, the question of where to start. In the main, the club have their sights set on an application to join the North West Counties League for the 2021/2022 season – which encompasses the ninth and 10th tiers of English football – but, according to Smart, the size of the club poses a few potential problems.

“The issue potentially is that some of the teams in the league we would be playing in have much smaller fanbases than ours and some of the grounds that we go to might not be able to cope with the amount of supporters we bring,” he says.

“That said, we as a board have no divine right or expectation of going to anybody and saying we are Macclesfield FC, we want to start in a higher league.”

So far, the club has launched a tiered membership scheme, where a supporter can pay a one-off sum for various gifts such as future season tickets, discounts for club merchandise and free subscriptions to the new club gym. At the time of writing, the club has almost 200 members, and is looking to replace the grass pitch at Moss Rose with a new 4G one which it can then make available to hire for local teams.

Macclesfield FC won’t be getting carried away, though. According to Smart, Smethurst has a clear blueprint in mind with one major buzzword: sustainability.

“Mr Smethurst has acquired the assets of the club and he wants the business itself to wash its own face,” he explains. “I think that’s how every business should be run, I don’t think it’s healthy for any business to have a sugar daddy who’s going to fund it until they get bored with it.

“The aim for Macclesfield FC is to be on a sound financial footing with no debt, but the money’s got to actually come in to support it. That is why we’ve launched the membership scheme and are planning to lay down a 4G pitch, enabling the ground to be used on a daily or even hourly basis throughout the season.”

4G pitches? Free gym memberships? It appears Savage and his colleagues are venturing into the unknown here, but in Chester FC, they have a torch to follow in the darkness.

After debt-ridden Chester City succumbed to a compulsory winding-up order in 2010, the fans behind phoenix club Chester FC were able to quickly pick the club up off the canvas and restore the area’s sporting pride, overseeing a successful rise through the divisions which now sees them reside in National League North, just two divisions below the EFL.

Smart, however, knows there are lessons to be learned.

“I’ve spoken to a couple of people from other phoenix clubs and one of the mistakes they’ve made was raising all this money in the first place and spending it fairly quickly,” he says. “Chester went up a couple of the early leagues by winning the league by 20 points and spending a lot of money in the process. They then ran out of steam as the money ran out.

“So in my eyes it’d be far better to win the league by one point and keep your finances intact rather than winning the league by 25 points and spending all your money. You need to run it as a proper business, as opposed to running it in an emotional way.”

What will be emotional is the support. After all, football in Macclesfield is back. The ascent of Smethurst’s phoenix club will likely be more incremental than emphatic, and the pain of the implosion is unlikely to be remedied overnight. But for now, all that matters is this: in a town awash with footballing history, the Saturday 3pm slot will be occupied once more.