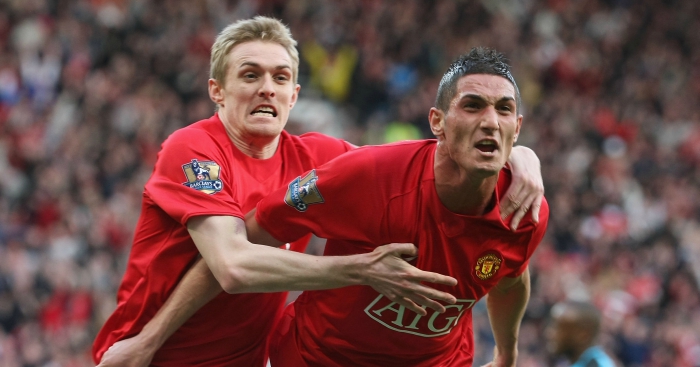 Federico Macheda says Darren Fletcher “strangled” him after his memorable goal against Aston Villa in 2009.

Macheda struck a dramatic stoppage-time winner against Villa in April 2009, a goal which turned out to be crucial in the Premier League title race.

The Italian struggled to live up to the hype generated by his goalscoring debut, and now plies his trade in Serie B.

Now 25, the striker discussed the game with ESPN FC.

“It was after 90 minutes when Patrice got the ball,” he said.

“He gave it to [Michael] Carrick, who switched the ball to Gary Neville. I was running forward, and I couldn’t breathe.

“I was fitter than I’d ever been in my career because I’d been flying for the reserves, but I was so tired.

“Neville went forward and passed to me. I made the first touch and tried to turn around with the back heel, but I lost the ball in the first place, and the ball went back to [Ryan] Giggs. I was in a position where I couldn’t do anything. My back was against the goal.

“I was tired, but I tried to back heel again. I turned and shot. I wasn’t even looking at the goal. It was instinct. At least I would have had one shot on goal.

“I looked up, and the ball was already inside the net.

“The stadium was going crazy. I didn’t know what to do. I started to run to my family, but everyone grabbed me.

“Darren Fletcher started to strangle me on the floor, and I was struggling to breathe. His arm was around my neck. I said to Danny Welbeck, who was hugging me: ‘I can’t breathe, man. Tell him to move.’

“Finally, they let go, and I ran to my father, who jumped over the fence and hugged me.”