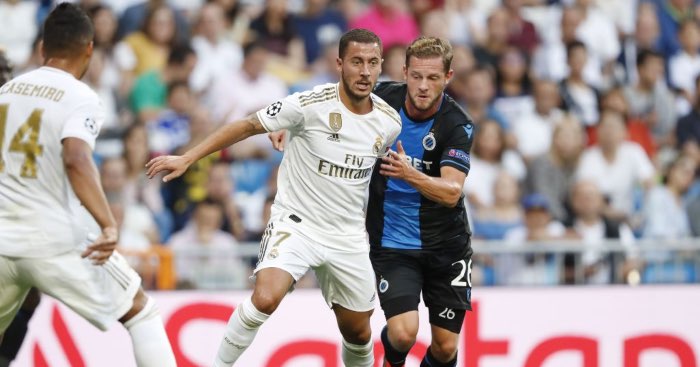 Casemiro insisted new teammate Eden Hazard is among the world’s top five players but is still adapting to life at Real Madrid.

The former Chelsea star sealed a £130 million to the Bernabeu this summer but has been criticised as he is yet to score in his five appearances after he began the season with injury.

The 28-year-old was again largely ineffective as Real rescued a 2-2 draw against Club Brugge on Tuesday night.

But Casemiro admitted the 28-year-old needs time to adapt to life in Spain and backed his new teammate’s ability.

The Brazilian midfielder also reminded Hazard, that if he is to fill the sizeable void left by Cristiano Ronaldo, he must score goals.

“(Hazard) is trying, but football is (about) goals,” Casemiro told Marca.

“We know he is among the world’s top five (players) and it is normal to have a period of adaptation.”

Casemiro felt his side must peform better than how they did in the first half of the game against Club Brugge but praised the effort and spirit shown by his team, as he and Sergio Ramos scored second half goals to rescue a point.

‘I didn’t see the fans leaving (the stadium) angry and in the second half, they supported us a lot.

‘I haven’t seen them supporting us as much as today.

‘We have to play like we did the second half, and we should never ask for forgiveness because we always try to do our best.’