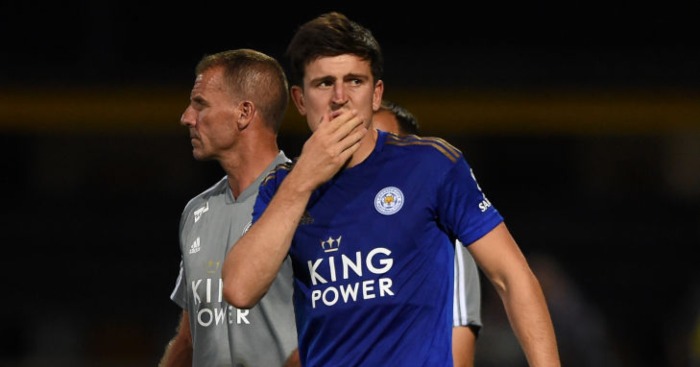 Moving to Manchester United from Leicester City used to be an easy decision. In fact, as recently as 2016, even after Leicester had won the Premier League, there was little controversy when N’Golo Kante bolted for Chelsea.

The virtue, beyond the obvious, was in the promise of permanence. Leicester had achieved something wonderful, but the slide back to reality was expected to be quick and dispiriting. Chelsea offered Kante a permanent home at the top of the table, promising to gate him into the top-six for good. And, while Leicester were suffering through that awful divorce from Claudio Ranieri, Kante had immediately become part of another title challenge. What it represented was depressing, but he was still proven right.

Superficially, the decision now facing Harry Maguire is similar. Once Leicester’s valuation is matched, he will be free to move to United. He’ll have his hand stamped at the door and receive a fantastic pay rise on his way into the top-six party. For all intents and purposes, it’s an event which should pass without a second’s thought.

And yet there’s a nagging suspicion that this could be a mistake. Previously, jumping up the table came with caveats about playing time and opportunity – the Fabian Delph, Steve Sidwell, Scott Parker problem – but that’s not in-play here. Should he join, Maguire would slot straight into Ole Gunnar Solskjaer’s starting line-up and become quite comfortably his best centre-half.

So why the hesitation? Three reasons: because of what Maguire has been able to achieve at Leicester, because of the mood and trajectory of the club, and what United, in their nebulous state, offer by comparison.

It doesn’t seem so long ago that starting for Leicester and England would have been mutually exclusive. We have, mercifully, moved on from the days when snobbery selected the national side and, thankfully, it’s no longer the case that a player has to wear a Champions League badge on his shirt to have an international future.

Nevertheless, Maguire’s progress has still been admirable; he has a place of his own in Gareth Southgate’s side and managed to win it during a time of relative flux at the King Power. The Claude Puel era, when Leicester could look like four differents sides within the space of a single game. Now that the situation has improved, with Brendan Rodgers arriving and a battalion of developing players blooming in concert, the result is an incubating environment which promises to nourish Maguire’s abilities further.

Perhaps that’s an understated commodity in football. Enough examples of the reverse exist, but players are still too slow to recognise what’s good for them – not in the material way, of course, but certainly in the sense of what benefits them as footballers. In Maguire’s case, that’s the chance to anchor a young and developing team, and the opportunity to start both inside two of the best full-backs in the country and behind one of the most intriguing midfields in the division.

And that’s for Leicester. Where he would also be working for a head coach who demands possession football, who wants the ball to move artfully forward and whose patterns of play should – through exposure – endow Maguire with a little more finesse. He’s a more rounded defender than he’s often given credit for: big and physical, but with an ability on the ball which belies his slightly oafish reputation. Maguire isn’t a gliding ball-carrier, that’s a stretch, but when he advances up the field in that runaway-lorry way, he’s disruptive and effective. And very modern, actually, because every major club now demands that at least one of its centre-backs step regularly into midfield.

So the counter-argument is the What if? scenario. Rodgers is no George Graham and his defensive struggles at Liverpool were pronounced enough to outlive his tenure. But while he isn’t likely to make Maguire a better, basic defender, he’s capable of equipping him with more style, making him more dynamic and refined than he currently is. From a growth standpoint, it’s easy to imagine him evolving under Rodgers to the point at which he’s not only a better component for England, but also a viable option for a broader range of clubs.

The worry, then, is over how this decision might look in a year’s time. United’s immediate appeal is self-evident. They are a wealthier club than Leicester, promising bigger wages and a better calibre of teammate. They also finished higher in the league by some distance last season and their wealth teases theoretical improvement at a dramatic pace.

But that logic has been used to sustain fans every summer since Sir Alex Ferguson departed and it’s one which also depends on a disingenuous reading of their situation. United have become the club at which it’s always assumed that life can’t get worse and yet, whether it be through position, style or atmosphere, a new issue always finds a way to appear.

In reality, Maguire would be joining a club with very little definition. Solskjaer is head coach. For now. Paul Pogba is their star attraction. At the moment. Even just within the defence, there can be little certainty over the kind of unit into which he would be expected to integrate. The same is also true of the midfield, which never seems to emerge from its perpetual state of flux.

When a player enters a team in which the circuits aren’t properly connected, his task is far harder. Who is he playing his out-balls to? Which other centre-back would be asked to compensate for and compliment? Those are big, troubling questions and they’re reason to pause for thought. Becoming the eleventh man in a settled team requires a significant adjustment. Being dropped into a team in which half the places are unfilled is a different prospect altogether.

As pronouced as that technical challenge is, though, maybe the great concern is over how Maguire might deal with the club’s baggage. When a player is signed for such a large fee – potentially a world-record amount for a defender –  he becomes responsible for curing the problems he inherits. He is the solution, the silver-bullet, and if he isn’t at the vanguard of a quick and dramatic improvement then, invariably, he’s pilloried. Victor Lindelof can attest to that, Eric Bailly too – and their fees were meagre in comparison.

It characterises the challenge, but it also portrays the danger. If United’s season were to follow last season’s pattern, for instance, and include the kind of losses which parodied Phil Jones and Chris Smalling beyond recovery, what uncertainty might that create over Maguire’s place at Euro 2020. There are variables in any season – and at every club – but Manchester United’s failure always occurs under the brightest light and, as a result, often has the most damaging effect. After all, while it’s partly an illusion created by social media’s emotional incontinence, under-performing at Old Trafford can rapidly turn a player into a punchline.

So is this a sensible move to make now? Many of the players from the current generation see United as a representation of the game’s apex and as an opportunity which should never be turned down. In this state, though, the club are really a threat to the very form which made the player a viable option for them in the first place. That’s evidenced by the damage they’ve done to the reputation of almost everyone to have joined them in recent years: Matic, Pogba, Shaw, Lindelof, Bailly, Lukaku, Martial – they have all been devalued. But for someone like Maguire, whose career has grown in relative quiet, the howling discontent – the noise – associated with Manchester United seems especially menacing.