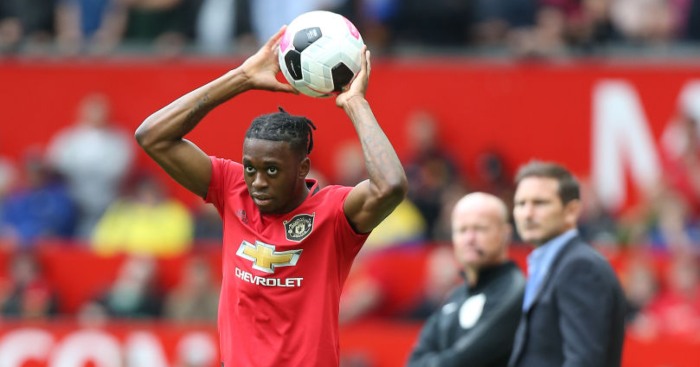 Talking ’bout a revolution
Manchester United beat Chelsea 4-0 on Sunday. Let’s ignore for a minute that Chelsea basically shat themselves and consider just how wonderful that makes Manchester United. But how did they do it?

Actually, ignore that ‘s’ on the end of ‘transfers’ because it turns out that Harry Maguire is in no way responsible for this sea change, but it is Aaron Wan-Bissaka who ‘has revolutionised the way in which United play’. After just 90 minutes. A whole revolution. From right-back.

He was good, there is no doubt about that. But ‘revolutionised the way in which United play’? Oh do f*** off.

His name is Rio…
Never mind the revolutionary Wan-Bissaka, did you see Harry Maguire? After 90 minutes of quelling the attacking talents of Championship forwards Tammy Abraham and Mason Mount, The Sun’s Neil Custis is in love:

‘HARRY MAGUIRE was roared down the tunnel at the end of the game and deservedly so as United’s standout performer.

‘They have not had a player like this since Rio Ferdinand left Old Trafford.’

Nobodies diary
Neil Ashton, in his quest to excuse Frank Lampard of any and all ills, asks a series of probing questions in The Sun:

‘Is Kurt Zouma, on loan at Everton last season and Stoke the season before, ever going to compare with central defender John Terry?’

Well no, but do you know who could compare with John Terry? The guy who Lampard discarded and joined Arsenal last week.

‘Can Mateo Kovacic or Jorginho ever be converted into a central midfielder to rival Lampard and Michael Ballack?’

Pretty sure they are already central midfielders, fella. Oh and they did just finish third and win the Europa League.

‘Will Tammy Abraham ever be as influential as Didier Drogba up front?’

No, but do you know who’s better than Tammy Abraham? Olivier Giroud, that’s who.

Excusing Lampard because he does not have equivalents of the greatest players in Chelsea’s modern history has set the bar pretty frigging high and early for ‘ways we can make the appointment of lovely Frank not look like a complete disaster’.

Is there life outside Liverpool?
Now Mediawatch takes its first foray into Liverpool.com, the new US-targeted venture from the people that brought you the Liverpool Echo.

We are particularly excited for their weekly feature taking in ‘The Premier League storylines that affect Liverpool this weekend’. Because it’s not all about Liverpool, you know.

And this wonderfully damning paragraph on Chelsea:

‘Quite how they’ll line up against the Reds in Turkey remains to be seen, but it’s fair to say Lampard has some serious work to do. That should not, of course, be any excuse for complacency on Liverpool’s part, but to see the likes of Marcus Rashford, Jesse Lingard and Anthony Martial cause such havoc shows they are vulnerable in the extreme.’

Yep, because those three really are sh*te.

Make love, not VAR
The Premier League season has begun and that means Garth Crooks is back with his BBC team of the week, merrily picking Ederson (‘I adore his audacity but not his neck tattoo’) as his goalkeeper after he ‘starred’ in a 5-0 win. Oh and picking central midfielder Kevin De Bruyne and winger Raheem Sterling as wing-backs. Did he not spot that Wan-Bissaka ‘revolutionised the way in which United play’? The div.

Anyway, De Bruyne is really only included (at wing-back) because Crooks wants to have his say about VAR:

‘While VAR spends its entire time looking for potential red cards and flaws in the game, those of us at home or in the stadium are screaming: what for!? VAR is a scientific method designed to help the referees arrive at the right decision, not give supporters a heart attack!

‘Meanwhile, Kevin de Bruyne played on against West Ham completely undeterred by the technology, although VAR did try its utmost to undermine so much of his work.

‘De Bruyne opened up the Hammers’ defence almost at will, only to see the most wonderfully-crafted goal for Gabriel Jesus chalked off. VAR may have been right but what a killjoy.’

He ‘played on against West Ham completely undeterred by the technology’? As did every single Premier League footballer who played this weekend. It ‘did try its utmost to undermine so much of his work’? Did it? Or did it rule out a ‘goal’ from Gabriel Jesus on the grounds like Raheem Sterling was offside? A ‘goal’ – it must be said – that did not remotely involve De Bruyne.

But well done De Bruyne for somehow managing to be brilliant despite the intervention of technology to make correct refereeing decisions.

Who’s the Anka on the coast?
Mediawatch has had all summer to get accustomed to The Athletic having a barrel-load of money and still employing a man with zero knowledge of Southampton to be their Southampton correspondent, and we were just about coming to terms with that curious turn of events when he wrote a number of ‘Ankadotes’ (add your own extra letter where appropriate) on the bottom of his latest Southampton piece, one of which was to mark the passing of the Saints’ PA announcer.

We are sure that lessons are being learned by the hour on this brave new venture but one should surely be very simple: Never mix puns and death.

Barry Glendenning on Wolves (no £).