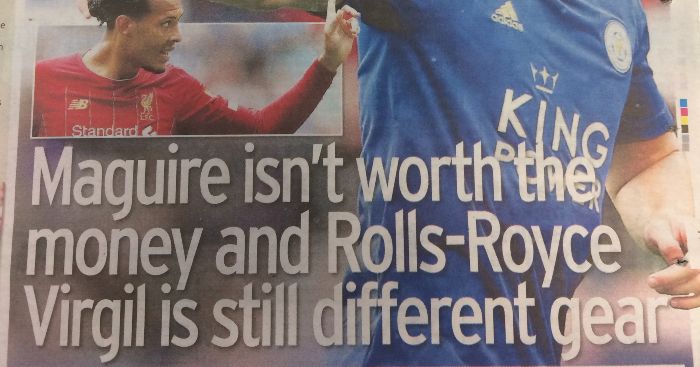 And there we all were thinking he’d rocked up exclusively to play alongside Phil Jones.

Kidd rock
But ‘is Maguire a major upgrade’ on his new teammate, ‘who once brought comparisons with Duncan Edwards, but never kicked on?’

That is the question asked – and weirdly never really answered – by Dave Kidd in a Sun column he uses to lambast Manchester United for not being good enough to sign Matthijs De Ligt.

It’s a fine argument, one that correctly surmises how United ‘have plummeted from champions of England to also-rans and Europa League regulars’ in six years since Sir Alex Ferguson left.

But Kidd seems intent to take it all out on Maguire, who ‘struggles for pace and a tendency for blunders’. Such as accidentally missing out the word ‘has’.

‘It is a glaring example of United’s reduced status that they could not land the Dutch outhouse, 19, who switched from Ajax to Juventus for £17.5m less than Maguire.’

It is also a glaring example of their unwillingness to deal with troublesome agents and their fees (Mino Raiola) or hand out mammoth contracts (a basic salary of £270,000 a week which could rise to £415,000) to teenagers instead of a more acceptable figure (£190,000 a week) for a known quantity.

‘Maguire is far more than just a big hulking centre-half.

‘He is good on the ball and loves a rampaging upfield run.

‘But he certainly doesn’t enjoy the sense of impregnability possessed by Liverpool’s Virgil van Dijk, the man he overhauls as the world’s dearest defender.’

Neither does De Ligt. Remember Jadon Sancho nutmegging him and Marcus Rashford embarrassing him in June?

Pep Guardiola does. Because, as Kidd is at pains to point out, the Spaniard ‘believes Maguire’s lack of speed is a significant weakness’. He said as much during the recent Amazon documentary on City.

The manager was therefore ‘at his cunning best’ on Sunday when suggesting signing Maguire ‘turned United into title contenders, while insisting Manchester City could not afford the Englishman’.

‘This was a cute little stab at mind-games from Guardiola,’ Kidd adds. Or an honest appraisal of a player he definitely wanted to sign this summer. Or a simple response to a loaded question? Why would he bother playing ‘mind games’ with a team that finished 32 points behind them last season?

But Maguire certainly ‘has a mistake in him’. Much like literally every other footballer to have ever played. Even Virgil van Dijk!

If his biggest crime is that he is not the best centre-half around, he’ll be alright.

Collyless
Except he won’t, will he? Stan Collymore ‘always speaks his mind’ for the Daily Mirror, and is here to tell us all that United are silly sods and Maguire ain’t all that.

As a Mediawatch tease, just know that this is the biggest crock of shite one might ever wish to read. pic.twitter.com/DJNUI1vRy5

‘Manchester United finally got their man yesterday with the £80million capture of Harry Maguire – but they have paid double his true worth.’

How have you possibly come to the conclusion that Maguire is ‘worth’ £40m? He is ‘worth’ whatever fee the selling and buying club agree to. That is how this shit works.

‘I like and respect Maguire who is a very good player, leader and influence in the dressing room.’

You obviously know this, having shared all those dressing rooms with a player who made his professional debut ten years after your retirement.

‘But the 26-year-old is not in the same class as Liverpool’s Dutch stopper Virgil van Dijk.’

Again, very few players are. Virgil van Dijk is quite good. But United could not sign Virgil van Dijk. United needed a better centre-half than their current options – should they not have bothered because anyone they would have signed would not have been ‘in the same class’ as one of the absolute best around?

‘For a British central defender with leadership qualities, Harry fits the bill.’

So what’s the problem?

‘But if you want premium quality to push you to a Premier League title or Champions League then Van Dijk is your man.’

‘Maguire, even in an expensive market, is overpriced and United have played [sic] twice what I consider to be his realistic value to make him the world’s most expensive defender…£40m would have been a fairer price in my view.’

Then thank f*** you are not in charge of running a football club. Or any sort of business. Maguire is homegrown, 26, has extensive Premier League experience, is a World Cup semi-finalist and had four years left on his contract at Leicester, who did not need to sell.

On top of that, the length of contract he has signed at Old Trafford essentially makes this a seven-year investment. Even if you think United have ‘overpaid’, City and Guardiola – who Mediawatch trusts more than Collymore when it comes to football – had a reported £60m bid rejected. £40m would have been sodding mental.

‘His price tag means he now eclipses Van Dijk, 28, who became the world’s costliest defender when he joined Liverpool from Southampton in January 2018 for £75m. But that has proven to be worth every penny.’

Yet when he joined Liverpool the very same things were being said about him that are being repeated about Maguire now. Such as…

Too much money burning too many big holes in too many pockets.

Even the biggest clubs will be pricing themselves out of the market soon.

Closed for high maintenance
Buried in the corner of Kidd’s aforementioned Sun column is the tiniest of digs at ‘a high-maintenance boss who has never won a trophy’. The entire 58 words are here:

‘Mauricio Pochettino has done an outstanding job over the past five years at Tottenham.

‘But the more he mouths off about his dissatisfaction, the less likely he is to get a move to a bigger club.

‘Because, for all his strengths, the blunt truth is that the Argentine is a high-maintenance boss who has never won a trophy.’

The ‘blunt truth’ is that Pochettino took over a Tottenham side that had finished sixth under Tim Sherwood and were knocked out in the Europa League last-16 stage, took them to a Champions League final and four consecutive top-four finishes in five years with a net spend of little over £30m and had absolutely no right to do so.

Real Madrid and Manchester United, former employers of Jose Mourinho, are unlikely to be deterred by an ‘outstanding’ manager who ‘mouths off about his dissatisfaction’.

Elephant in the Roon
‘Wayne Rooney is in talks about a sensational return home with Derby County’ – Neil Ashton, The Sun.

Mediawatch for one cannot wait for Derby’s most famous (Croxteth-born) son to come ‘home’.

Some breaking news here. Spurs are interested in Ryan Sessegnon who ‘remains a teenager despite an unsuccessful season last year’ according to Sky sources pic.twitter.com/gVARnShjfU

Most genuinely hilarious and predictable headline of the day
‘Liverpool fans should lay off Queen’ – Henry Winter, The Times.

Recommended reading of the day
David Squires on the new Premier League season.

Gabrielle Marcotti on VAR in the Premier League.