Home Mailbox Mailbox: Were the 90s the golden age of football? 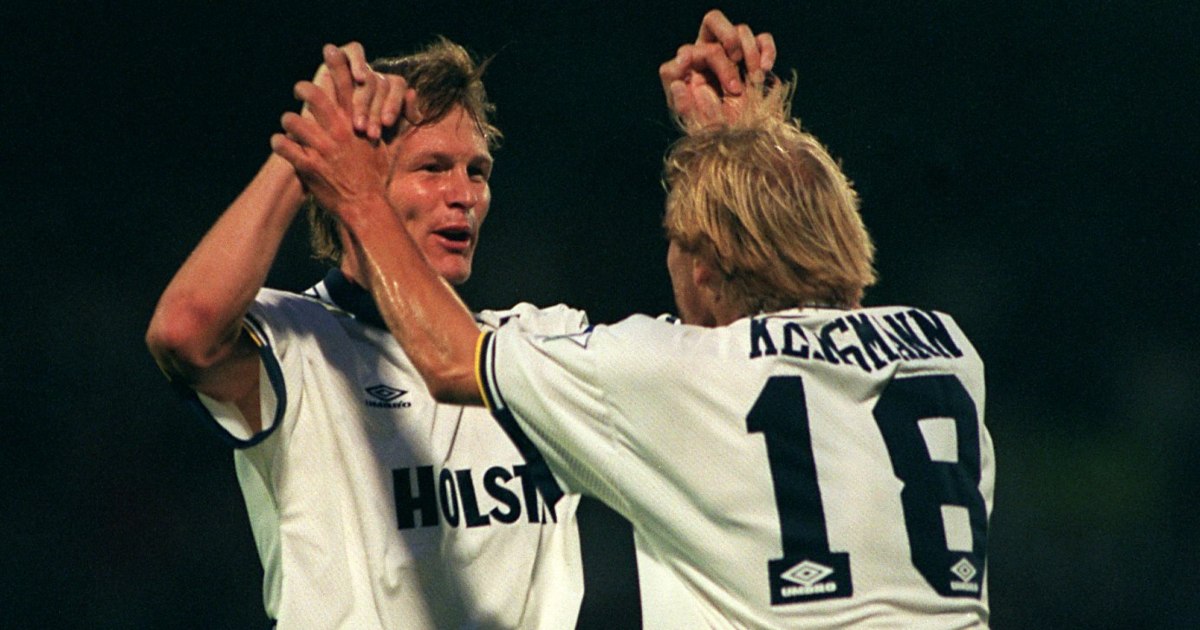 Were the 90s the golden age of football? Or is that only case if you were a kid in the 90s? We also have mails on Arteta, Solskjaer and strikers that became managers. Send your thoughts to theeditor@football365.com

Golden age of football
Thanks to Johnny Nic for making me relive some of the old days, and thanks to Matt Stead for that article on worst assists, because one has helped me answer the question of the other.

The golden age of football was the 90s. I was raised as a Spurs fan, and in this era I saw the likes of Jurgen Klinsmann, David Ginola, Teddy Sheringham and, um… Stephen Carr. But I would regularly get sent off to stay with my aunt in Middlesbrough, who was a consulting surgeon at the club and got invited to stuff, so during that era I not only saw play but also met the likes of Juninho, Emerson, Ravanelli and, um… Colin Cooper. We lived just outside Oxford so my dad took me to see them a few times, with the legendary Joey Beauchamp tearing it up in the First Division. And I clearly remember the visit of Manchester City in 1997 when Georgi Kinkladze absolutely stole the show and scored twice in a 4-1 win.

What other era has had players of that quality, and also Colin Cooper, at such a random array of clubs across the divisions? It felt like football played for the joy of it. The money was just starting to ramp up to high enough levels that players could fully commit and not worry about what happens afterwards. The tactical and lifestyle innovations of that era are well known. The 90s was that glorious period between old and new, when it all smushed together and somehow made both versions better.

A few highlights from elsewhere in that period: Beckham scoring from halfway, Bergkamp being awesome but land-bound, Vinny Jones grabbing people’s balls, Gazza being magic, the whole of Euro 96, the Cantona kung-fu incident, that whole Spice Boys business in Liverpool…

I won’t put a formal start and end date on it, but the formation of the Premier League through to Man United winning the treble in 1999 seems like an apt pair of markers. But as Johnny Nic pointed out, your personal golden age is probably just whenever you were a kid. Back when things were better.

Have a great day everyone.
Harry, THFC

Arteta on par
Since Simon decided to raise judging whether Arteta should be sacked already, I thought I would share my two cents.

Looking at the opening fixtures, I would argue that Arteta is probably just about on par given opposition. Brentford beating us was a shame but they drew 3-3 against a much better team in Liverpool. Chelsea and City were inevitable humblings, wins at Burnley and Norwich expected despite low scoring, a win against Spurs is always demanded and a 0-0 draw against the team with the third best defence in the league and taking three points against Leicester (and for me, the best tactical manager). So apart from Brentford, things have gone ok.

These last four games Arteta finally has “his team” and its resulted in three wins and a draw. Coming up, Palace (w), Villa (d), Leeds (w), Leicester (d) and Watford (w) offer up in my mind another 11 points which again would represent good progress for Arteta should he get them before the November/December schedule. The defence looks much more solid, giving us a strong foundation to push on from but I don’t disagree we need more goals if were going to get those 11 points but I’m not sure its entirely Arteta’s fault, Aubameyang is clearly out of form, Saka looks tired. But he needs to figure it out and fast and it is ultimately his job.

I would add that the 4-0 away to Slavia Prague, 4 goals at Leeds, 3 at Benefica, 3 at Newcastle, 4 at West Brom, 3 at Southampton and 3 at Chelsea prove Arteta can get a tune out of his forwards, these were all in the second half of last season. It would be nice if that could come back but it took the first half of last season to build a solid defensive base before we started scoring high numbers, hopefully we get there sooner this year.

As for whether we should renew his contract, I still stand by we need to wait till Christmas. If he is in top six by Christmas I’d be happy for an extension, anything less and I’ll join Graham on the Arteta out unless he has even more bad luck than he has already had.
Rob A (Tomi, Ramsdale, Sambi and White all proving to be good transfers helps fight his corner too) AFC

Ole not wrong to rest Ronaldo
I have seen many pundits, and as of this morning now seen Alex Ferguson now say that “you should always start your best players”, I am yet to truly understand this with particular reference to United’s draw with Everton at the weekend, and how silly it seems.

Before kick-off, I like many others thought Ronaldo should have started, but he didn’t and guess what; United were on top in the first half, they didn’t quite dominate but had the better of the chances with Cavani and Martial missing good chances, and the latter of course converting another chance. 1-0 up, a few breaks on the counter and some chances conceded but deserved leaders on the balance of play.

60 minutes in, Ronaldo and Sancho come on the field, and United are winning when the ‘best player’ comes on the pitch only to go on and draw the game. He was brought on to find the extra goal, I get that, but on the face of the performance after coming on United performed markedly worse, so maybe (and I realise that we will never know) if Ronaldo had started they might have conceded earlier. I actually credit Ole with changing the team that has gone a goal down in their previous 5 (FIVE!!) games. Yes Ronaldo has found the moment of magic on a couple of occasions but worth arguing if the moment/s would be necessary had we played like we did in the first 45 on Wednesday, as a cohesive unit.
Barry, MUFC, Dublin

McTominay, Striker-managers, and the real F365
I have to disagree with the McTominay criticism. He hasn’t had a good start to the season, but he’s coming off a layoff, and is adjusting to many changes in the first team, in terms of what’s going on behind and in front of him. McTominay plays at the heart of the Scotland defence, and has performed adequately against very good teams. Anybody remember the only game that England didn’t score at in the Euro 2021? And as he has shown against teams like Leeds and Man City – he can pop up to score. He’s also held his own against Neymar and co. His problem clearly is consistency and clarity of what his role is. He is physically strong and very energetic. He is the Darren Fletcher mark 2 at the very least, but has the potential to be much greater. If he was playing for any other club outside the top 4, there would be rave reviews about him, that’s just the nature of the game.

And also for Tim, who starts with the question of whether great strikers make good managers, but then goes on to describe traits of any striker. Although I do agree with the logic – midfielder and defenders see more of the game in front of them and have to think harder about the patterns of play, I have 3 words for you: Sir Alex Ferguson.

Also, re the optimistic piece about Solskjaer and Man United – who are you and what have you done with the real F365?
Ved Sen (MUFC)

Just a short selection of retorts on strikers turned managers
A striker cannot therefore be a good manager.

I am sure Sir Alex Ferguson would have something to say.
Sharath, Singapore

…I’m sure I won’t be the only one pointing out to Tim that one A. Ferguson may have been a striker.

Was Mancini (Euros and EPL winner) not a second striker?

Maybe not a top, top (thanks ‘Arry) manager, but did striker George Graham not win a title or 2?

Three that came to mind in the first 20 seconds.
Adam, Australia

…just to come back on Tim’s email this morning that strikers don’t make great managers. I would like to propose the following:

…I’m sure you will get a bucketload of replies regarding this one, but I can think of a striker that has gone on to become a reasonably good manager. Some guy called Alex Ferguson, who Tim may have heard of.

Before going onto become arguably the greatest manager of all time, he was also top scorer in the Scottish top division, back in the days when it was competitive and Scottish teams won European cups.

Then there is Brian Clough. A ridiculously prolific striker who became a manager at a young age after a career ending injury. With his unconventional style of management he won the league with 2 small unfancied teams. He also won the European Cup twice as well as a European Super Cup – with Nottingham bloomin Forest.

A more recent example is Roberto Mancini who has won major trophies in Italy, England and on the International stage. Pretty decent by anyone’s standards.

So sure, Ole might not be living up to Man Utd’s expectations (it’s an Ole out week atm right?) but it’s probably not because he is a striker, and more to do with him being an average manager.
Adonis (Ole in!) Stevenson, AFC

…Tim raises a good point. Wracking my brains for strikers who have gone onto management, I do recall a pretty nifty Scottish striker who moved to Rangers for a then Scottish record fee and scored crucial goals for them in Europe. I wonder what happened to Alex Chapman Ferguson?
Samwise, MUFC

…While Tim is setting a deliberately high bar for ‘great striker becoming great manager’, I’m sure I won’t be the only person pointing out that to varying degrees, plenty of talented forwards went on to be successful managers. Tim’s wider point, that they are the exceptions to the general rules, but some of the most influential managers in the history of football were forwards, many of them very good: Fred Pentland and Steve Bloomer, for example, survived the horrors of Ruhleben and made the Basque region into a footballing powerhouse in the inter-war era. Post-WW2, as European football competitions were properly established, Rinus Michels (and later Johan Cruyff) and Valeriy Lobanovskyi became leading lights; those competitions (and many others) would later be won by Brian Clough, Sir Alex Ferguson and Jupp Heynckes. Finally, there’s the most recent manager to win the English men’s top flight with two different clubs: Sir Kenny Dalglish.

Really that’s all just window dressing on a gratuitous attempt to get Steve Bloomer mentioned in the mailbox, so thanks Tim.
Ed Quoththeraven