Home Mailbox It is time to give Man United’s ‘weak link’ more credit? 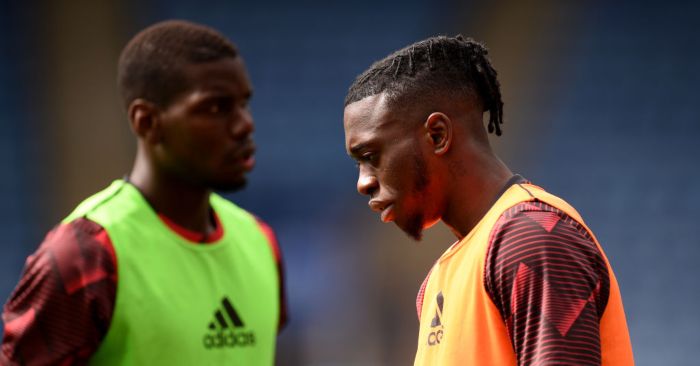 Send your thoughts on other Manchester United players who get a bad rep (Daniel James is actually brilliant) to theeditor@football365.com

Sevilla anxiety
Any idea why there were no cooling breaks during the Wolves game but there were 2 during Monday’s Manchester United game?
Paul, Sydney (LFC)

The chosen Wan
After reading another 2 emails denigrating Aaron Wan Bissaka that were somehow putting it as granted that he offers nothing going forward, I feel obligated to not only defend him but actually use some statistics for that.

Firstly, AWB is joint 4th for assists among the premier league right backs, with four. Three of them were crosses, even though he apparently never crosses.

Secondly, he is also joint 4th for successful dribbles, even though he apparently never does that either.

Third point, right back is frequently named as a weak link for Manchester United going forward, while I am not sure if I ever heard the same for the left back position. There is pretty much no attacking statistic, where Luke Shaw or Brandon Williams would have better numbers per game than AWB. Neither of the former two has any assist, while they have lower number of crosses per game, total dribbles, successful dribbles and only marginally higher key passes.

I believe AWB is a victim of how good he is with his defensive contribution. People automatically assume that players like Bellerin, Aurier or Mendy are great going forward because of how calamitous they are defensively (spoiler – no, they are actually not that good going forward) and conversely they think AWB MUST be bad in the attacking phase because he is great at tackling, interceptions and because he doesn’t leave space behind (…he isn’t bad in the attacking phase).

He is also constantly compared to TAA. I wont bring any new point to the discussion by saying that Manchester United play differently to Liverpool but I will challenge the seemingly universal opinion that the modern fullback should be as attacking as TAA and that Manchester United will be hampered by having a more defensive one. From the top of my head only 2 top teams play with ultra attacking right backs – Barcelona, who do that since Dani Alves times, and Liverpool, where I believe it is more to do with the emergence of TAA and Klopp realizing it works rather than a well-thought plan from the beginning.

Real have Carvajal, Bayern have Kimmich, Chelsea have Azpi – all different players but none of them an attacking machine – and even Pep uses Walker in quite a conservative right back role. Why should it be problem if Manchester United have a player who is great defensively and quietly effective when going forward?
Jan, Prague

A reminder
To Ted,

The moment: A headed clearance come to Matic ten yards from his penalty box. Off the chest he hit a superb volley up the left wing into the path of a Mr.Greenwood.

(This is my favorite part) He takes just one touch, perfectly weighted, looks up while he did so, see’s a Mr.Fernandes arriving at the back post & exquisitely crosses the ball over the defense for Mr. F to score on the volley. B-e-a-utifernandes!

The verdict: GwudZ can cross.
Calvino. (Ps For sure still sign Sancho) (Pps If Mourinho was around still he would be a right back)

Hend of the argument
The suggestion that Jordan Henderson is no worthy Player of the Year seems to bring into stark relief one of the problems with many football fans. Or at least British ones, I can’t speak for other countries.

The suggestion seems to be that Henderson’s captaincy skills, organisational skills, tactical understanding, positioning, and all of the other ‘mental’ attributes that go into making a top footballer shouldn’t be counted when considering worthiness for football awards. The importance of these attributes to being a top player can easily be seen by considering what a centre-back would look like if his reading of the game, organisational skills, decision making etc. were all substandard. Just because Henderson plays in the centre of midfield doesn’t mean these attributes are any less important – indeed given the unorthodox way this Liverpool team is set up and the role the fullbacks play, those attributes are even more important than usual for central midfielders in order to keep the team’s shape.

An old coach of mine had a favourite phrase – “90% of football is played in the head”. Of course, the problem with mental attributes is they don’t tend to lend themselves to highlight reels. No-one in Liverpool’s team can play Henderson’s role quite the way Henderson does. De Bruyne would fail miserably at it. So maybe people shouldn’t write Henderson off because he doesn’t play like De Bruyne or Mane but rather understand what his role is, and see how hard it is to fulfill it any better than he does.
Greg, Taunton.

Jordan Henderson, a player critisised by a very recognised opposition manager…by some Liverpool and opposition fans. Living in the shadow of a club legend and facing personal struggles. I think he’s done well to overcome those challenges and not allow it to break him down mentally.

Criticism and negative things have made him better. Lesser men have crumbled. Gascoigne, Merson, Best. Players with so much talent wasted, couldn’t handle the pressures placed on them. Henderson, a player with limited talent, remained humble, worked really hard. Adapted when he had to.

Always respected by Managers who have worked with him. Gone on to become England Captain. Liverpool captain. Lifted the European Cup. Super Cup. World Club Cup. And Premier League trophy. Even Gerrard didn’t do that.

To see where he started and where he is now is nothing short of miraculous.inspirational. its the type of story thats makes us believe that even we can do things when people say we can’t. You could say its sort of like Leicester winning the Premier League… You could make a very good movie of it.
Donp LFC

Man Utd should not buy Sancho because they have Greenwood? I can’t tell if you are serious or just looking to start a fight.

Utd need a Sancho (not necessarily Jadon) for squad depth…unless you think Daniel James is sufficient cover for the right flank and the left flank. Really is that simple.
Ollie (they still need a defender and midfielder) BT, Bangkok

Basketbol
I awoke this morning to the Lakers (a Los Angeles based team) beating the Nuggets (a middle of nowhere based team) on the last shot in the last second.

Media and fans treat the game as an exhilarating watch with a fantastic finish with two competitive teams going at it until the last buzzer even though the Lakers “should” have had it and I doubt too many pundits gave the Nuggets a chance.

Yet in England when a game goes to extra time and is full of well worked sequences, great saves, great blocks and a spate of sometimes unrealistic looking stops by the keeper…its a horrible watch and the bigger team is trash and the manager must be sacked and players aren’t good enough and for some reason the coach’s “looks” come into play.

I don’t really know what you people want…boring 5-0 games? Shit, go watch City. Go watch replays of the Golden State Warriors from two or three years ago if you want to see one sided contests. Zero interest in that for me.

All the people mailing in claiming to know more than a coaching STAFF, a BOARD of directors (usually) and other staff, when was the last time you played a game of footy? Is it ever fun walking in the 5th goal by the 45th minute? Yea its efficient and great and etc etc but fun? Entertaining to watch? Only when schadenfreude is involved.
N.V.M. (Grr i had to watch an extra 30 minutes of futbol after b***ing and moaning about how theres no footy for 3 months)

Do you remember before Stonehenge? Do you remember the day the first stone was moved to make the journey to start to build Stonehenge? Well, that day was also the last time Manchester United played a match and didn’t get a penalty.

Excuse the pundits
As a neutral I quite enjoyed the Manchester United versus Copenhagen game on Monday , end to end stuff with a stellar goalkeeping performance at the centre of it.

However , can anyone shed any light on what insight and summarisation we are expected to get from the following :

Couple that with the commentary from Ian Darke who was more jubilant with the performance than OGS and it’s like watching MUTV.

Is it too much to ask , considering we are paying a kings ransom for the service to get just a teeny tiny bit of non biased assessment?

Many thanks
Mark Kelly

Meet your Macheda
I’m sure you’ll get a million of these and the irony of a Man Utd fan moaning about a dodgy decision going against his team 10 years later is quite wonderful, however, he seems to have stopped the YouTube video he was watching early.

Surely Edwin didn’t forget Macheda knocking the goal that pulled one back in with both of his hands? Surely a Man Utd fan can’t be that blinkered that he would intentionally forget a goal that was just as absurd about the one he’s moaning about.

Anyway, Edwin, please come back tomorrow with some more of your comedy stylings as that was great.
Lee, Highbury

Oh, mate
DC must be kicking himself that he picked his European Managers XI the day before Pirlo got the Juve job…
Bill (Been doing this mailbox thing since you were all in short trousers) Handley, Gloucester

Could I bring your attention to another left back who played for Man United, Denis Irwin. Denis is actually right footed as well and think he was quite successful during his career.
Carl, United fan