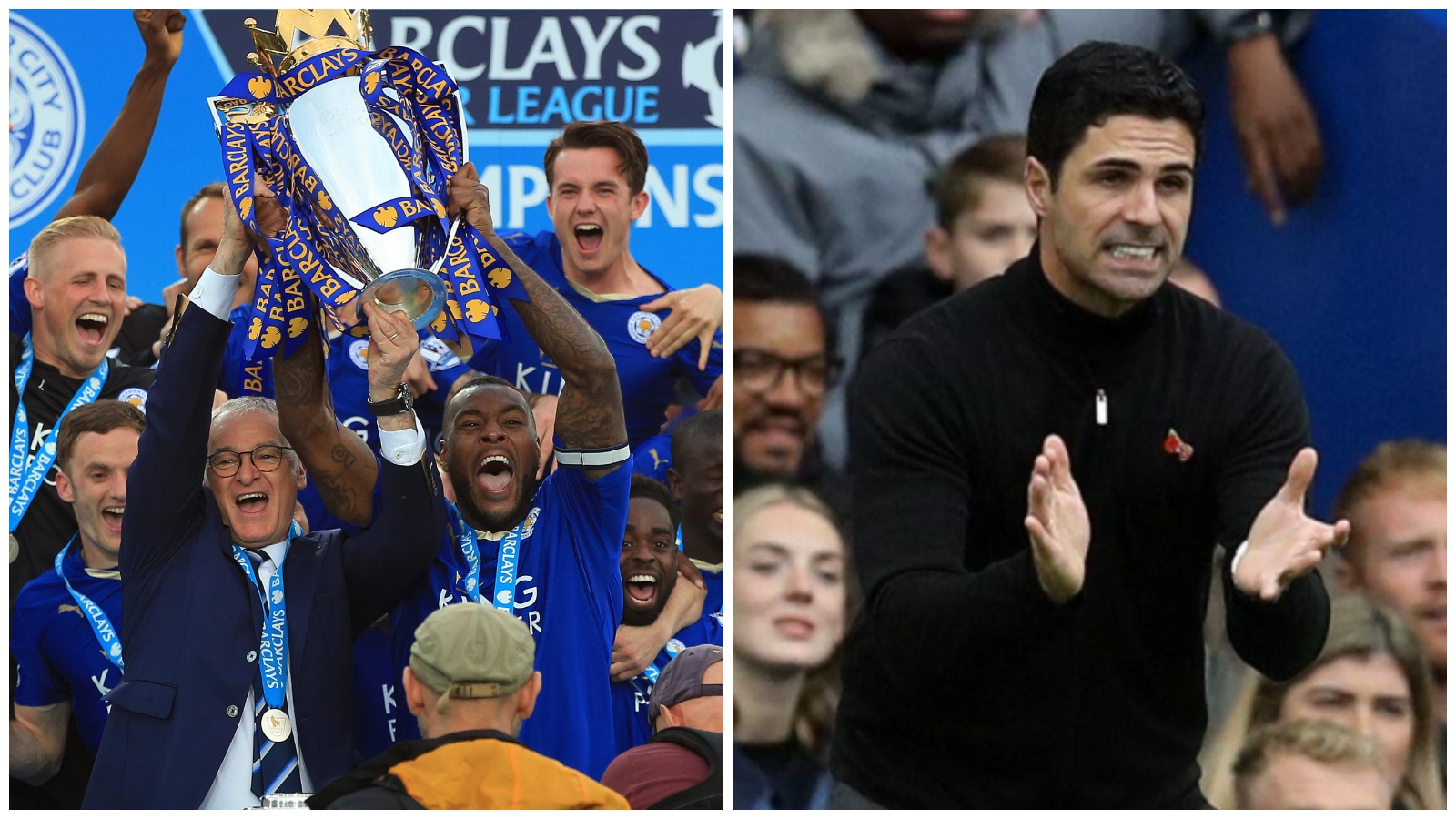 If Arsenal win the Premier League this season, it will be a better achievement than Leicester City’s triumph in 2016. There is also praise for Newcastle United’s sh*thousery in their huge win against Chelsea, while Spurs are told they are pretty much Brazil.

Arsenal title greater than Leicester
F#$k what the odds makers say, what the pundits say, what the fans will say and what F365 will have you believe. If Arsenal beat this City team to the PL title, it will be a bigger upset than what Leicester did.

And not to disrespect that 2016 miracle, but back then 72 points would have won Leicester the title and all the real contenders were having a funk. This year is not the same, this well oiled mean City machine with that warhammer of Haaland up top is not like Guardiola’s first City team. There was no Goliath that season, this year is the biggest of them all.

And Arsenal are very much a David. Despite their Big 6 credentials, they were unquestionably the laggards in this group and the most likely to drop out. No reasonable analyst gave them any chance of title challenge, and barely anyone for top 3. (Just look up F365’s predictions). And not to mention that they are doing this while also navigating a European campaign, something Leicester didn’t have to.

Don’t let the revisionists get you to accept the narrative. The script was written for City and Haaland, but life rarely follows one.
Gaurav, Amsterdam (ABC – Anyone But City)

As Arsenal fans have complained a lot about refereeing decisions against us in recent times, I think it’s only fair to point out that I am baffled by the decision to not award a penalty against Saliba in the Wolves match, and utterly incredulous that VAR barely looked at it. I just don’t understand.

Also, the early winners article on Arsenal suggests that Arsenal fans are not getting carried away out of fear of implosion. I think that’s a part of it but I think it’s a lot more pragmatic than that. Our first 11 is excellent but our squad is light. Had we kept struggling to get a goal against Wolves, for example, our options to change the game would have been to bring on Reiss Nelson, Nketiah or Marquinhos. If we can manage to add a couple of quality additions to the squad in January then I think people will be a lot more optimistic.
Amro, Irish Gooner (Smith-Rowe coming back will hopefully help a lot too)

Top Guns
Great team performance with some uncharacteristic mistakes. Saka still playing in third gear. Hope we see his best at the games and after. It’s a testament of his skill and intelligence to be able coast his way through.

Great all-round performance again from Gabi Jesus, but he needs to be more clinical in front of goal and apply the simple finish sometimes. One touch to control, one touch to finish, but I love what he does to our counter attacks, how he slows down until he gets support. It’s always a wonderful sight to behold.

That said, love what Ramsdale did to Zinny after his last sloppy giveaway, it shows this Arsenal team push themselves to give their best, and fight for each other. Credit to Arteta for building an indomitable team spirit. It’s what made the last Man U team great under fergie. Big, ferocious characters not afraid to say their mind.

Finally, I’ll take Daniel Podence in a heartbeat as an Arsenal squad player (pushing for starts.) He’s good enough. And love what the Wolves coach did with Traore, pushing him centre. If they had more quality, they would have hurt Arsenal a lot. Their shape in the first half was really good and intriguing, but they lost their heads in the second half.

Advantage Arsenal, but for how long?
Iyanu, Nigeria.

surely to have done it better, the first 11 rungs if your ladder should have been, you know, the starting 11. Whatever your feelings on Ramsdale, he’d have to be your 11th most important player at least.
Neill, Ireland

Newcastle’s home win against Chelsea today was deeply, deeply satisfying. Our stoppage-time sh*thousery was frankly magnificent. Jamaal Lascelles – still a club captain, though he seldom plays — got booked for winding up Mark Cucurella even though he never got on the pitch. Absolute legend. He may not be good enough, but I want to attend his testimonial.

The incredible solidarity at the club appears to make for committed team performances, and it’s honestly making me a little weepy right now. I’d also like to refer you to my previous comments here about Joe Willock. He was my man of the match today, just shading Trippier. Wor Joe is indeed here, there, and everyf*cking where.
Chris C (I wish my identity were intensity, too) Toon Army DC

Up the Magpies
Seeing Newcastle just score against Chelsea, and hearing the ground erupt I couldn’t help but be glad for Newcastle. A club with a passionate fan base, who never stopped believing, yet they only got screwed over by Mike Ashley. Today, they’re playing some fluid football and just scored a smashing goal.

Glad for all the fans of that giant of the game, the clubs horrid ownership be damned.
Ryan

Disillusioned
I accept that I’m biased but I’ll start by admitting, before our manager makes his excuses and before Match of the Day brings us its own analysis, that it was a bad performance this afternoon by the boys in red and blue. That said, Forest – Palace was a wonderful example of what is going wrong with English football.

Any impartial observer would question the oft quoted claim that the Premier League is the best in the world. The quality of football from both sides was abysmal. The referee’s decisions were inconsistent, foul or no foul? He added one minute first half stoppage time after a player was treated for at least five minutes laying flat on the ground with blood pouring from his face. No wonder the ground was full of the sound of “You don’t know what you’re doing”. Why is this referee allowed anywhere near a Premiership game?

Then we have VAR at its worst, taking maybe 3 or 4 minutes to decide that a defender’s outstretched foot was probably half an inch nearer the goal than the attacker’s outstretched foot, even though the attacker’s body was probably at least two feet offside and correctly (?) flagged by the assistant referee. I’ve said it before and I’ll keep saying it, if VAR has been introduced to correct clear and obvious errors then 20 seconds should be enough time for a decision. Let’s be generous and allow 30 seconds for a trial period. But then, those who are in a position to make such decisions have no incentive to disrupt their comfortable and well paid existences.

Bitter? Please don’t mention it, we can’t get draught English ale here in Greece.
Chris Feather, Eagle in exile, by the sea near Athens

Lots of hype about Brazil being basically able to go home with the trophy before it starts, but I’m unsure.

It used to be, It seemed at least, their teams were the best of every major European clubteam. Defenders from Milan, midfielders from Bayern, silky forwards from Barca and Real. Casting an eye over their squad, reckon you have two world-beaters in Neymar (although he’s no gegenpresser) and Vinicious Jr. Going down after that… Richarlison. Okay. Martinelli is on a level with Saka, Smith Rowe. Raphinha from Leeds last year? Getting-on a bit Fabinho. Definitely getting-on a bit Alves and Thiago. Paqueta looks alright, for West Ham. Oh yes, Fred too.

So two world beaters and a bunch of alright squad players. Very high expectations too.

I’ve noticed this outlook from so many people and it genuinely confuses me. Why do people think Mason Mount isn’t good? He’s literally one of my favourite players and I’m not a Chelsea or England supporter. The guy got double figures in goals and assists last season. He’s been Chelsea’s POTY for two years running and he’s only 23. He was instrumental in them winning the Champions League. He’s been absolutely brilliant so fat in his career.

I feel like people completely misjudge the type of player he is. He’s not some out and out creator. He’s such a versatile player. You can put him anywhere behind the striker or even in the midfield as he’s played many times for England and Chelsea. The positions he picks up are great and his work rate is second to none. The fact that he adds as many goals and assists as he does is a bonus. Like looking at the Chelsea midfielders and attackers since he’s broken into the team, he’s by far the most impressive.

It’s not a coincidence that every single manager he’s ever had rates him. I think he would have been absolutely unbelievable in a peak Klopp Liverpool side playing in that Wijnaldum type of role. My mate last week was talking about how Grealish had another awful game vs Fulham… I was with him all day and I know he did not watch the game. But he said he didn’t score or assist and had a WhoScored rating of 6.1. It was absolute nonsense. Grealish may have had a bad game but it’s just absurd to suggest so considering you didn’t see a single second. Likewise Mount this season. I’ve watched him very regularly and the fact that his output is rather low does not do him justice. This obsession with numbers is so pointless. I could see with my eyes that Grealish was very good against Man Utd in the 4-1, but he had nothing to show for it.
Dion, Arsenal.

If Southgate was a high school teacher
If Gareth Southgate was a high school teacher, he would have convinced exam boards and colleges to accept the teacher-assessed grades that were applicable during the Covid lockdown forgetting that students are back to writing formal exams! How else does one explain him persisting with some players who have barely featured for their clubs and left behind real performers in the England world cup bound squad?I sincerely hope that this lack of match fitness for some players will not come back to haunt him as the tournament progresses.
I also want to believe that Liz Truss is not his inspiration on how to have the entire country on tenterhooks!
Yiembe (just praying that England live up to the hype as the team has forgotten how to score goals)