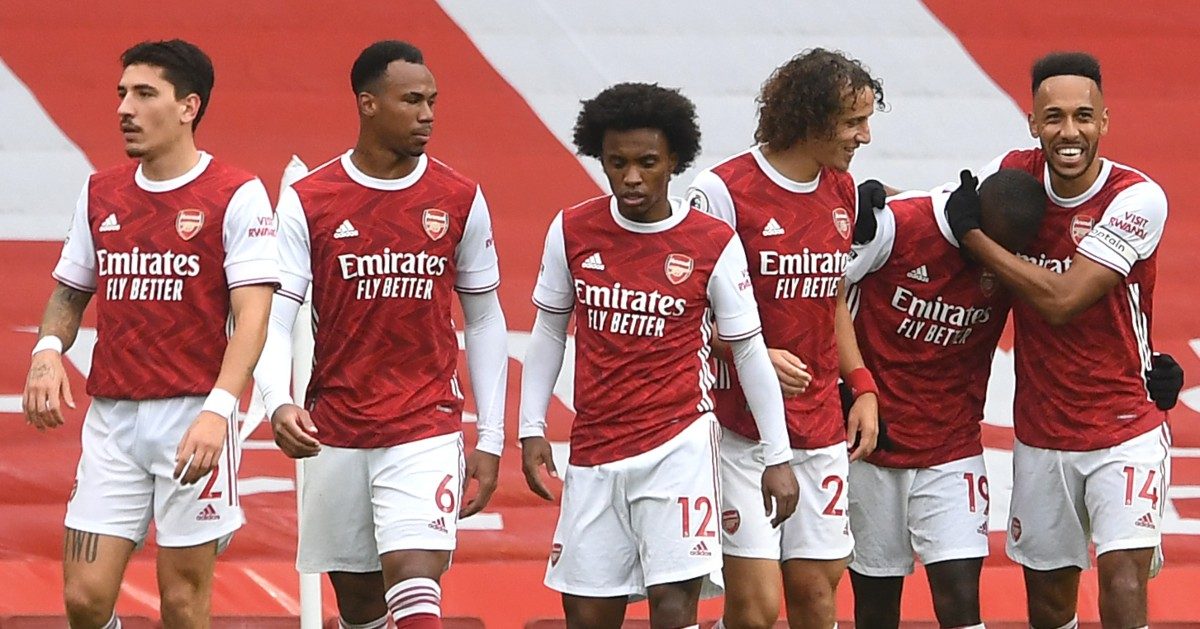 David Luiz and Willian might not necessarily have been disastrous signings for Arsenal. Their influence on the squad could yet reach far.

Taking the Mik
You got some balls F365 for publishing an article defending Arteta/Edu right when the mailbox is pointing out your pro-Arteta bias.

Arsenal’s kicking has got a lot to do with Edu’s signings and Arteta’s game plan over the past two years. And also for currently being at the bottom of PL table. Let’s not pretend it’s “just” due to their latest transfers. So much backbending to defend these two!
Gaurav MUFC (Bend it like F365)

Money for old rope
Merson’s suggestion that Arsenal should have spent money used to upgrade their CBs buying another older centre forward on high wages who will probably kick off and disrupt the team if they don’t get starts is exactly why he tells anecdotes at golf clubs instead of running football clubs.

Don’t get me wrong, I’d have loved to see Daka, Vlahovic or Martinez rock up, but unless we shifted Laca or Eddie, it was never going to happen.

It’s fair to critique elements and question best use of cash on specific targets, as well as internal self-scouting of how good players like Xhaka exactly are (I don’t think Arsenal can hope to be a regular top 4 with him in the first team, but he’s fine squad depth) but there’s a real lack of nuance from basically every pundit on Arsenal right now, as if they cannot comprehend buying a younger squad of high upside players (who let’s be honest, will work with any manager even if we bin Arteta) and it’s getting ridiculous.

Obviously it’s a gamble, but given throwing money at short term veterans has been a disaster, why not?
Tom, Walthamstow

Defending the undefendable (or at least players who cannot defend)
With all the comings and goings at Arsenal I just wanted to say a special thank you to Hector Bellerin.  Yes, he has become a multi-millionaire at Arsenal and his performances have really dropped this year, but he has also been a great professional and a vocal and active supporter regarding climate change.

He has been at Arsenal for a decade, embraced the club, culture and even accent of the local area while playing 183 games and winning 3 FA Cups.  He has never realised his full potential in my opinion, at 26 I expected him to be making a big money move back to Barcelona where he would be a key player in winning Champions Leagues and titles for Spain a la Cesc, however due to injury and form (not to mention the Barca mess!) that has not happened.

In normal times a move from Arsenal to Real Betis would be seen as a step down, however in 2021 it is at worst a side-ways step, he will continue to play in a sixty thousand stadium in one of Europe’s top leagues, be is playing in the Europa League, will be able to enjoy the sunshine and lifestyle of Andalusia and also be participating in one of Europe’s most underrated derby’s, the Seville derby.

Do I wish he was staying? No, his time has come.  Do I wish Arsenal had made money on the deal and potentially sold him last year when supposedly PSG were going to pay £20m for him? Of course.  But that’s life.

And before I go, I just wanted to make another alternative point about the benefit of David Luiz and Willian at Arsenal over the last years.  Two of the brighter points in a very bleak period for Arsenal have been the signings and progression of the 2 young Brazilians Gabriel and Martinelli.   If Gabriel continues to becomes a decent Arsenal central defender you cannot tell me that it was not helped by having one of the most decorated Brazilian central defenders of his generation training with him, and equally if Martinelli becomes an impactful explosive forward, you can’t tell me spending a year watching Willian who is arguably one of the most successful Brazilians to play in the Premier League did not help.

Again, not saying either should have stayed just sometimes there are wider benefits then just how a player performs in a match although clearly that’s what they are paid to do so what we expect as a minimum.

Also, just wanted to highlight the fact the Willian and Bellerin both choose to walk away from large wages to instead go and play football, there was a lot of noise from Rio regarding Phil Jones sticking around and not going to play and hence taking space of a younger player in the Man U squad, fair play to Willian who apparently tore up a contract that would earn him millions and to Bellerin who went pretty quickly after being dropped.

Brady bunch
The Glazers clearly believed that signing Cristiano Ronaldo would have the same effect that Tom Brady had signing for the Tampa bay Buccaneers.

No one expected the move to work out, initially, because the Bucs’ defence was not up to scratch with the rest of the league. But they did punch above their weight and showed up in the superbowl final.

Across the pond in Manchester, there is a sense of foreboding every time the line up is released and Fred lines up in midfield with Pogba. No one expects United to win the league with a Michael Carrick/prime Nemanja Matic shaped hole in midfield. There is a bigger opportunity in the champions league, where teams can get away with not having a solid engine room for a 38 game campaign. You cannot bet against Ronaldo on those midweek late night matches, no matter how old he is.

United ultimately showed their fans they were bulljiving by saying they needed to sell first in order to buy a midfielder, then subsequently shelving out a 70million pound 2-year package for someone not named Yves Bissouma. So what were they playing at? Ole’s obsession with Declan Rice (who is clearly enamoured with Chelsea), may have played a part in the club not chasing alternatives and ultimately having cash-in-hand to steal Ronaldo from City. Huge chance it could backfire, not likely to win the league, but I’m banking on Ole’s good record against clear favourites PSG and the Brady effect to kick in with Ronaldo and deliver us to the big one.
JDV #MUFC

Even discounting most of his career/legend, why would a guy who has – in last 12 months alone – won Serie A Golden Boot & Euros Golden Boot join a team ranked, at best, joint 3rd favorites for the title with them having won nothing major for almost a decade?

You’d have to go back to Sporting Lisbon for the last time he was at a club which was less guaranteed trophies than this Utd side.

If he wanted to go to City (or Bayern/PSG, or stayed at Juve) to easily win trinkets he’d have done so.

Yeah, Utd are one of the very rare few who could afford his wages – but of those clubs who can, they’re the least easy path for further medals and stat padding.

He was never going to City, and the homecoming is a genuinely sentimental moment.
Calum, Scotland

Some thoughts
Just a few quick things about the recent goings on:

1 – Greenwood’s goal on the weekend featured something I’ve said Rashford and Martial need to do many times in this very mailbox. Stop just aimlessly cutting inside every time – step over like you are going inside then take it outside on your weaker foot. He did it perfectly. Teach that to the others please, Mason.

2 – Where has this notion of “blocking” transfers come from? Did the phrase “rejected an offer” become too unsexy for the noise of the transfer window?

Jack the lad
Dave Hoffman took umbrage with your good selves having Manchester City as one of the transfer window losers but it’s his description of Jack Grealish as “one of the best young English players” that I want to focus on.

Grealish turns 26 in 8 days (by the time you read this). Now that obviously makes him a young man. I mean, like pretty much every other footballer in the Premier League, except for Ronaldo and Milner, he’s younger than me. However, speaking in footballing terms, he isn’t really in the “young player” category anymore.

To put his age into perspective, he’s just 9 months younger than Raheem Sterling.

Not only is he older than people seem to think he is (after all, when’s the last time you saw Luke Shaw being described as a “young full back”?) but his lack of consistency is overlooked as well. Sterling has played one full season of senior football more than Grealish (9 to 8) but has played a whopping 224 more games (club and country – 492 to 268). Grealish has missed something like 60 club games through injury, which at his average rate of playing 31.5 club games a season, is two full seasons for him.

I’m not trying to run Grealish down, just to be clear. He’s undoubtedly a very good player and Pep will probably make him into an even better one. I just don’t get the hype about the guy, especially when it seemed that City wanted him to replace Sterling.
Jerry

Chelsea smile
I am very impressed with Chelsea’s business during the transfer window. Lukaku & Saul will offer a squad full of winners a deserved lifeline in difficult games. However, l am particularly happier of Chelsea not signing Kounde on €80 million Euro in a pandemic inflicted market after an initial £42 million Pounds was said to have been agreed.

Again, I was so impressed with Chelsea blocking Hudson Odoi’s move to Dortmund on loan after we endured a humiliating treatment in the Haaland/Raiola transfer fiasco with the money craving Dortmund hierarchy. With Tuchel on the saddle, Chelsea is in good hands.. And will definitely deliver silverware this season, God willing.
Obidi

Effortless goals
Many will mention Cristiano Ronaldo breaking the International scoring record and it is an outstanding achievement, however let’s take a look at Kazakhstan vs Ukraine, hear me out readers, I never expected it to be a game that you had to keep up your eye on but after two minutes of time Roman Yaremchuck decided to effortlessly score a goal worthy of a Puskas nomination, it reminded me of a mixture of the outrageous efforts Zlatan Ibrahimovic scores but also the way it looked as effortless as a Dimitar Berbatov goal, it’s a goal you have to seek out to watch, it’s truly special.

Which brings me to ask this, what is the best goal you’ve seen scored that looked like the scorer barely made any effort to do so?
The Admin @ At The Bridge Pod

Roman Yaremchuk may have already scored the goal of the week! 🇺🇦