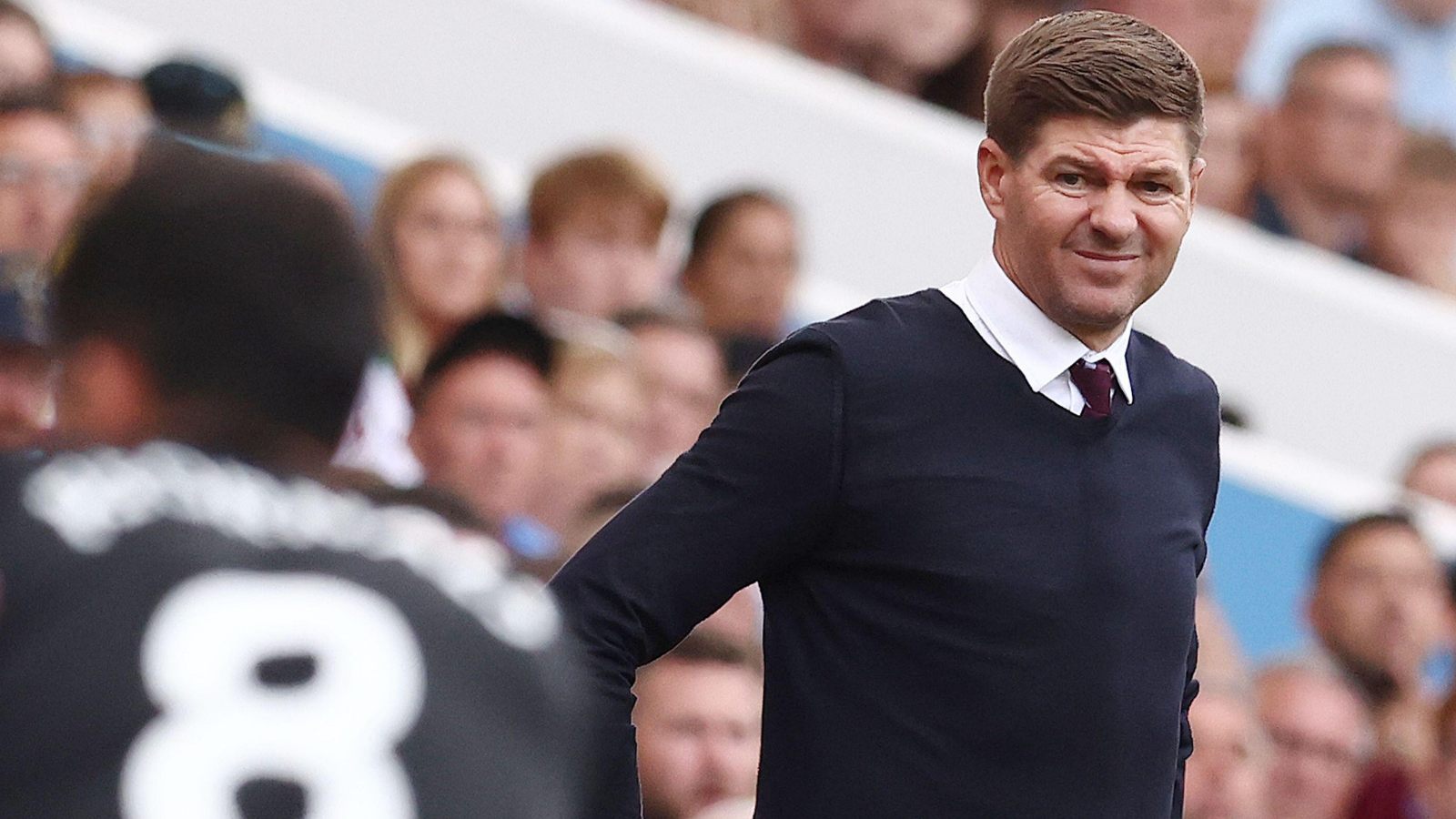 The Mailbox lists the reasons why Aston Villa should axe Steven Gerrard. Also: Arsenal and the celebration police; and have Man Utd made the signing of the summer?

Glazers and the deal of the window
Quick one to Steven Avery, and Klopp Legend (maybe one and the same? certainly the same obsession with the Glazers).

Yes, you may not have noticed, but the #GlazersOut is absolutely still going on. Maybe take a look at the stands.

Complete credit for the cojones in dropping the formerly undroppable Ronaldo and Maguire, and sticking with his best XI, goes to Ten Hag and his team. Complete credit for the excellent signing of Martinez in particular – who has completely changed the dynamic of the defence along with the change of captain – and finding the right way to let Eriksen tick, goes to Ten Hag and his team including recruitment.

None goes to the Glazers, just as signing Salah goes to Klopp not the Liverpool board and their lovely balance sheet and unwillingness to invest.

Incidentally, in the list of best transfers this year, is anyone ahead of Martinez? After the absolute nonsense published on this site, in this mailbox and across the media, I think he’s pretty well proven the point. An absolute pitbull of a player.

I think he will go into the annals as better than Vidic in time.

Final one, if TAA is to be compared to anyone it’s surely Beckham, or possibly Llorente in terms of his ability to play in different roles. This Pirlo chat does no one any favours, apart from the comments section amusement. But surely he should be the natural for the wing back role for England. Kane would have a field day.
Badwolf (Bournemouth are going to have a long season)

See ya, Stevie
I wrote in 2 weeks ago describing Gerrard as a fraud and since then it’s become evident to anyone with half a brain how true this is.

I loved Dean Smith with Villa. He brought the heart back into the club. But we knew he hit his ceiling and brought us as far as he could. We then needed a manager of experience to bring us to the next level and instead Purslow went with his heart over his head and pointed a novice with no top flight expertise but had a big name.

I just hope that both him and the owners acknowledge their massive mistake and remove Gerrard soon. Spurs saw the light last year and while we won’t get a Conte as a replacement, procuring a coach with experience isn’t beyond the realms of possibility, especially with the backing the owners are willing to show.

Gerrards achievements are many:

• Won 3 of the last 14 games
• 15th on the League for the year 2022
• Signing older players on higher wages to bring ‘experience’
• Does not have the ability to get the best out of players.
• Averaging lowest running per team in the league
• Man management non existent (seems to be a feature of top class players who turn to management)
• Loss of Michael Beale, the ‘brains’ behind the operation has left him clueless
• Doesn’t know best 11, best formation or tactics having had a full pre season
• Not even a good team to watch

Eddie Howe took over Newcastle at a similar time. They were in a much worse position and he has managed to turn them into a much better unit with a clear identity and has the results to show how good an appointment he was (saying that, Villa fans would have been annoyed if we appointed him – shows what fans know!). Viera’s Palace played us off the park last week and he also had a worse hand to play with when he took over and hasn’t been supported with the ‘names’ Villa have.

Villa is no longer a toxic club. It has unbelievable owners, stadium plans (which I trust they will deliver on) and a season ticket waiting list a mile long. It is there for the taking for a manager to come in and have a proper go of it. But they need to have experience.

I would love Poch (Newcastle got Benitez so why not), a Potter, a Rodgers. Someone who knows how to get the best collectively out of their squad and then be trusted to add quality to climb the league.

Arsenal and City are next up. Time is tickling.
Paul (Villa really are the best club to play when you need a result).

Richard Keys and the celebration police
Lambasting Arsenal for celebrating is the most boring and vacuous reaction any football professional can have.

Surely in sport you want passion and excitement, intensity and human emotion.

Neves’ salty tears
I just wanted to share the pleasure I got from Ruben Neves’ clownish post-match comments following Wolves’ hard-earned and somewhat fortunate draw at home to Newcastle. The Magpies had 64% of the ball and twice as many shots as Wolves, and he’s calling them a long-ball side? One has to speculate that he spent the last 60+ minutes of the match congratulating himself for his admittedly well-taken goal, because he was as unaware of the foul on Ryan Fraser that overturned Wolves’ second as he seems to have been of the battering his side actually took from a weakened Newcastle side. Wolves were often a threat, but the fact that NUFC blocked almost three times as many shots as they did tells its own story. Newcastle’s defense can be broached, as even Wycombe have shown, but they are also proving to be fantastic firefighters. Meanwhile, a panicked Huang was providing a lovely assist for Saint-Maximin’s sumptuous 90th minute goal.

You’d still think Neves would have seen the obvious early shirt-pulling penalty against Longstaff, mind, considering how far behind play he had lagged. It was quite obvious from a distance. Perhaps he was frustrated that ASM’s goal had eclipsed and erased his own? (I’d wager even Wolves fans will remember ASM’s goal more often.) I wanted to ask whether he wes in a fettle, pet.

As for the Schar’s yellow: I have seen a number of NUFC players get away with red-worthy offenses, and this wasn’t that. The tackle was not dangerous in its own right, it looked a clear attempt to play the ball, and it was the right call. We were the subject of a couple of really bad calls last weekend, and I spent the end of the weekend reminding Toon supporters online that there’s no conspiracy against us. Sh*t just happens in sport. But if you want my biased opinion, the stoppage-time foul on Anderson was no penalty, but merited a red in its own right. Joelinton’s return ball had completely split Wolves’ defense, and it was a clear goal-scoring opportunity. Ah, well. Win some, lose some, draw some 1-1.

Showboating sh*thousery
I am fully aware that Richarlson is a prick. I am. Really.

But he’s OUR prick.
Jon (Martin Tyler can leave it out with his pearl clutching), Lincoln

We all dream of a team of Ant(h)onys
I’m writing this just as the Antony transfer to United has been confirmed. Now that United have the unenviable ability to unleash an entire three-man forward line of Ant(h)onys (think about it…) on their opponents, I was thinking why not go full-on with an entire 11-man team? Of course you are all interested…

So apart from the obvious hat-trick of Ant(h)onys in attack, we have:

AM: Anthony of Padua. A.k.a. St. Anthony. The finder of lost things. Still can’t find 10 years of credibility, or a PL title. Capable of a miraculous cross. Inspired to take up the game by Gabriel & Jesus.

DM: Anthony Hopkins. A midfielder with bite. Perfectly capable of skinning his opponents.

DM: Anthony Perkins. Occasionally argues with himself, but is all about the bantz in the shower. Took up a career in hospitality after quitting the game because of injuries to others.

RB: Antonio Valenica. Still only 37, and still better than Dalot and AWB combined.

GK and Captain: Anthony Joshua. Convinced himself he deserves to be on the field despite having little hardware to back it up. Drops that hardware from time to time. Deserves the captaincy because he doesn’t question, debate or cry over decisions made, unlike previous captain Brun…oh b$llocks!