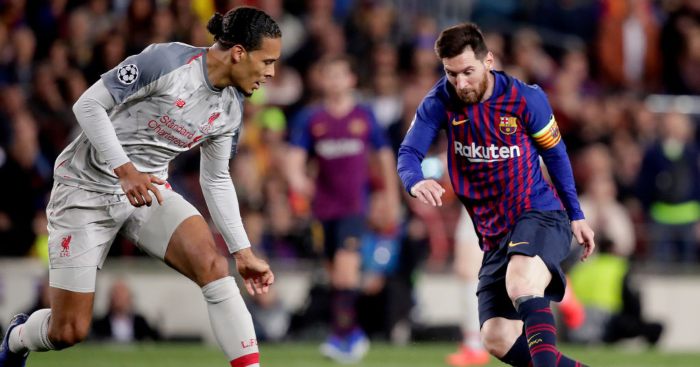 Barcelona’s future…
Inspired by Mikey’s mail this morning, I thought I would pop over my unsolicited thoughts regarding Barcelona’s future. On the whole I agree that they are approaching the Rubicon regarding Messi. In fact it is not just Messi who is approaching the end of his most productive years, but the entire backbone of their squad. Suarez is 33, Pique is 33, Rakitić  is 32, Busquets is 31, and Alba is 31. And while players like Ronaldo, Giggs and Milner have shown that players can successfully extend their careers late into their mid 30s, Barcelona certainly don’t want a whole squad of players over 30.

In light of this, their disastrous transfer policy over the last few years looks even worst. They have consistently got far too enamored with the shiniest players and then been rolled by the selling clubs. There mistakes are legion: €105 million plus a reported €40 million add-ons for Dembele who had 10 goals in 50 appearances for Dortmund, €120 million for Griezmann who scored at a respectable but hardly world beating 0.5 goals per game, and £105 million for Coutinho who was never even the best player at Liverpool. The entire debacle came to ahead this January when they granted an emergency exception to sign Martin Braithwaite for €18 million. Who only two years previously was lighting up the Championship with Middlesbrough by scoring 8 goals in 36 appearances!

So what should they do?

Firstly, Eric Abidal needs to be replaced as Sporting Director. His public shaming of players and fighting with Messi is inexcusable. Secondly, they should start mirroring Man City and Liverpool’s transfer strategies. Identify who they want to buy, and execute the deal quickly. If the selling club demand too much, move on to your second choice. A good rule of thumb is not to pay more than £50 million for any player. Man City and Liverpool are both happy to spend a lot of money on top players, but I can’t think of any examples of either of them significantly overpaying within the last two or three years. Thirdly, start leveraging the academy to generate serious dollars. Liverpool have made a small fortune selling garbage academy players to Bournemouth over the last couple of years. Many poorly run clubs are willing to pay top dollar for the castoffs of top clubs.
Oliver, LFC

How rated is Ruud van Nistelrooy? And how rated should he be?
I’m going to directly contradict my submission to this morning’s mailbox and prolong the “overrated” discussion. But I hope this comes across as a genuine topic of debate, rather than “wind-up merchant-ing”:

I began closely following club football in 2004. Around this time, and in the 2-3 years following, there were genuine discussions about who was better: Thierry Henry or Ruud van Nistelrooy. They had similar goalscoring records over a very similar timeframe, playing for rival clubs, and even made transfers to opposite La Liga giants around the same time.

In retrospect, this seems absurd. Thierry Henry is in the frame for Best Premier League Player Of All Time; Ruud van Nistelrooy is not.

Overrated players…
Just a quick reply to Oliver and his point on Salah being overrated. While I can agree that Mo frustrates me more than and other liverpool played with the ball at his feet (sometimes comically clumsy), I cannot agree that he is overrated. The fact is he has the highest goals in his first 100 games (70) in the PL out of any other liverpool player, which is unbelievable on it’s own considering Suarez, Torres, Fowler and Owen make up the top 5. But to top that only Shearer beats him in the all time list leaving Mo ahead of RVN, Aguero and again Torres. Sorry Ol, but Mo deserves all the praise he gets as he is an unbelievable goalscorer.
Jamie, Dublin

In response to Oliver Dziggel’s call for more objectivity with regard to players being overrated, if we use the metric of transfer valuation, surely the most overrated player ever is Denilson? Signed by Betis for a world record fee, did a lot of stepovers and not much else. Basically the Brazilian Adel Taarabt.
Gareth M, LFC, Cape Town

Ten of the most overrated footballers of all time
Dear Sir/Madam,

Angering Brazil has turned out to be a lot of fun… https://t.co/1pUyuPn9A9

Paranoia police
Based on the reds recent celebration of champions league victory last year, the long 30 years wait, it’s probably justifiable for police to be wary about over exuberant supporters disregard social distancing in their probable gathering outside stadium to celebrate. Now if these very supporters were to post online to, say,  gather at ethihad in anticipation of an arsenal win on the 18th, will the police also push for Manchester city to play on neutral ground?
Philip Lim (don’t look at me to organise these gatherings, I’m down under)

How to fix the crowd noise issue
So how do we fix the “crowd noise” atmosphere issue? I think it’s quite straight forward, for the whole 90 minutes plus additional time we have the very best of FIFA Soundtracks played, imagine the nostalgia when “Beautiful Goal” by Paul Oakenfold or “Club Foot” by Kasabian comes on
Mikey, CFC

Reading all the horror stories about what they will replace crowd noise with, I feel that it’s definitely a “back to the drawing board” affair at the Prem HQ at the moment. Let’s face it, they can largely do what they want, as most people agree that we do miss crowd noise and technology seems to be leading the way when it comes to creative solutions. The way I see it going, and this is already probably done to an extent with positioning of microphones around the stadium and a sound crew to sort the wheat from the chaff, is for the crowd noise to come from someone watching the game somewhere else. It may be from a pub in Sweden or Greece, or even piped in from the iPads of people at home in an appeal to our ever more narcissistic society.

In theory I’m now supposed to spell out a dystopian vision on the back of this, but I can’t be bothered because it’s Friday. Over to you.
Adam, LFC

Not a reflection of all Liverpool fans…
Hi

First of all Vinnie Pee’s opinions are not a reflection of all Liverpool fans, they are his views and his views alone, so any who seeks to generalise them can f**k off.

But Vinnie, truly your tone and attitude toward this situation is awful. Now isn’t the time to gloat and to do to other fans what some, almost certainly a minority, might have done to us previously, and in the immediate past on the issue of football’s return amongst the pandemic.

Personally, i’ll watch most of the matches if they do happen and if Liverpool do clinch the league i’ll celebrate modestly at home.

However let’s not kid ourselves about why it’s restarting, it’s about the money, and some aspects of that are more moral than others. For whatever reasons, top level football has been given the green light to proceed and it’s naive to expect those that run it to suddenly decline that chance.

So watch it or don’t watch it, but let’s all keep our reactions to it respectful and limit any form of Vinnie Pee-ness.
Cheers, Rob

Long time reader, first time writer…
Friday afternoon, still stuck in a pointless “Teams” meeting and drinking my home-brewed-pineapple beer (South Africans will understand) and I need to call you out on your average position easy run in nonsense.

At the end of the season, it is not league position that dictates who you’d rather play against, it’s more about who has anything to play for. It does make sense that the top 4 or 6 or however you want to define the top clubs are going to be difficult fixtures but I guarantee all managers from 1st place to last would rather be playing a mid table team than a relegation threatened team. Those in the bottom 6 play their hearts out for a point as a point makes a big difference down there but 2 points lost when fighting for Champions league is massive.

I had an idea earlier when I was more sober – why don’t all the F365 readers who’ve never written in, write in with something football related (I shouldn’t have to say that but unfortunately I do) and the regular mailboxes must vow to give the newbies respectful replies rather than some of our tribal filth. Please guys and girls, we want to hear some new stuff, sensible and crazy, it’s all good – don’t think you won’t get published, I guarantee F365 will, especially if you start your mail with “long time reader, first time writer…”
Jon, Cape Town (living in one of the most beautiful cities in the world and can’t even go to the beach because corona lives there)