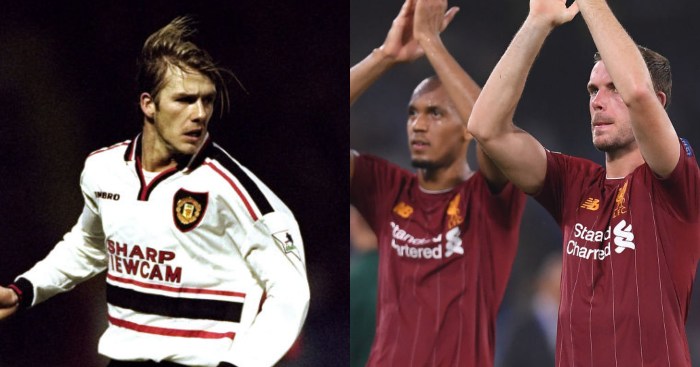 Send your thoughts and replies to theeditor@football365.com

After reading first Curtis Woodhouse opinion, then your top 10 article and recent mailbox, I wanted to share my opinion as the names I was thinking already emerged as part of the conversation.

Most overrated player must be Luis Figo and I was surprised he wasn’t included in your TOP 10 of overrated players. I remember when I started to follow actively football (other than Euros, World Cup and Champions League), it was La Liga the first season being one where Figo was still playing for Barcelona. So basically he was something like 27-28, on top of his game and making that huge transfer for Real Madrid following season. During the period of maybe 3-4 following years, I saw him play a lot as I watched as many top games in La Liga and CL as I could.

Figo was selfish, that was often my main thought watching him. He dribbled along the right flank, maybe got past 1 midfielder or defender before losing the ball, over and over again. There was nothing spectacular about him and he was in my opinion the weakest link in otherwise quite spectacular attacking lineup Madrid had. I am not saying he was bad player, but he was definitely not one of the best players in the world and Real Madrid stumping world record fee for him was as silly as Coutinho transfer fee already mentioned in earlier mailbox along another world record fee for Denilson by Betis. But I guess it was partly just a big middle finger and power play by Madrid towards Barcelona which might partly explain it.

Continuing with the same theme, in the earlier mailbox Brian argued that Beckham was more influential than Giggs and I wholeheartedly agree. I would further claim that Beckham overall was underrated because of his celebrity status which was a stick he was often beaten with – “he just gets more attention than he should because he is handsome and married to one of Spice Girls, hence he really must be overrated as footballer”. He was extremely hard working midfielder with excellent passing range and of course deadly in all dead ball situations. He also seemed to me to be mentally strong and inspiring team mate. Even if I’m not Liverpool fan, I would love to see Beckham in his prime in Klopp’s midfield trio. What a wonderful weapon he would be with his long range missiles to Mane and Salah.
Matti Katara, Helsinki

Let me firstly say that none of this should need ***ing saying:

His best season was 13 league goals.

Luis Figo’s record at Barcelona was 1 in 6.

In his best season Figo scored 9 league goals. Although meagre by… Curtis Woodhouse’s standards – Figo won the Ballon d’Or* and became the world’s most expensive player.

Or I’ll come round your house, do nothing, then go on Good Morning Britain to brag about it.
Simon MUFC

*Giggs was so much better

So I thought I would give you some of the players I always thought were overrated and could never understand the fawning over their mediocre existence, some will really piss fans off by the way.

Feel free to now write in berating me and calling me names, and even if you prove me wrong on most of them I will always be right about John “Captain, Legend, blah blah blah” Terry.
Paul Murphy, Manchester

I would not agree with anyone who says Giggs is overrated but I do believe there is a touch of rose tinted glasses regarding his career.
Everyone seems to think he was unplayable year after year,season on,season out.

Giggs was booed for a good 2-2.5 years fairly consistently at Man Utd.Remember the day Fergie booted a boot at Beckham after they lost to Arsenal in the cup?Giggs missed an open goal in that game and took awful stick for the rest of the game and the rest of the 02/03 season.

He was getting so much stick in a game away to Juventus that when he scored he ran to the away fans,turned his back and pointed at his name on his jersey leading the commentator to say “that’s how to silence your critics.. .for a while at least”

He mentions in his book how close he came to leaving the club due to the abuse aswell,as well as how frustrated he was that as he was now over 30 they would only extend his contract by a year(which was club policy but he said after all my service I expected more).

Not just Giggs but tere is a lot of bs written about Fergie,his power over players and the class of ’92 etc,but, as Gazza pointed out,Rio,Giggs,Cantona(to name a few) got up to all sorts under his watch.

Not to mention how many times Roy Keane was arrested in his drinking days.
Gussy,Ireland

In response to Stephen, Canada: Well there are many ways to define an overrated player. while I agree with your general point that we are susceptible to our own biases in thinking certain players are unimpeachable and we fail to see their limitations, we shouldn’t fall into the trap of belittling players reputations who were genuine competent footballers and contributed abundantly towards their respective teams success like matt tried to do with Scholes or makalele.

In my limited view, as a spectator of the sport for the past 20 years, over rated players may be defined as those players which caught a break at a young age and were given plenty of time and opportunities to prove his worth during games but came up short or were mostly putting in uninspired performances, viz-a-viz their supposed talent which was touted by their respective clubs/managers.  In essence a player that finds himself often the subject of discussion during the periods of banter when the subject moves towards those players that fans can’t really work out what the manager seems to see in him to warrant a space on that team.

So a few examples that jump into the mind when I think of overrated players I have seen over the years are the following:

In his article the great Matt Stead instead took some colossal players and attempted to justify taking a shit on their stellar reputations just to stir the proverbial pot(well done, job accomplished on that Matt!).  Incidentally here is list I found on the internet which contains 50 over rated players, some of which I agree with and some of which I don’t.
KC(dammit ! I took the bait)

Neymar is overhated…
Not really sure how you think Neymar is overrated. So many people dont even realise how good he is now. His antics in the last WC and his injury worries at PSG seem to have led people to thinking hes not that good. He was one of the best players in one of the best ever Barcelona teams. His record at PSG is absolutely unbelievable, and before people say it’s a weak league,its still top 5 leagues in the world. His numbers in Spain were fantastic anyways and he was easily top 5 players in the world and in my opinion still is hes just playing for the wrong team. He is a fantastic playmaker and one of the most exciting players I have ever seen. He does things Ronaldinho did but its perceived different because hes not as likeable. The fact of the matter is, he cant really be overrated if people constantly underplay how good he is. You wont find anyone over 30 talking positively about him. He may have been overpriced but he was a 25 year old Barcelona star who was the 3rd best player in the world. I hope he leaves PSG for the sake of his career. Hes the most exciting player of his generation.
Dion Byrne

Where is the common sense of Eamonn when you need it? After all this is Bayern’s first win in 3 months and last year Dortmund won 8 on the run etc etc

Next week, Eamonn explains why Rangers would have stopped Celtic’s 9 in a row and why Shelbourne will be crowned champions of Ireland (by predicting the remaining 29 fixtures)
Steve, exile in waiting

That Swiss fella is right…
I thank him for his list. Clearly successful former manager and Paul Pogba fan, Graeme Souness, Rio “United are back” Ferdinand, Danny Murphy, Eamonn Dunphy, Shaka Hislop, Richard Keyes, Daniel “Martin O’Neill will prove his Irish critics wrong at Forest” Taylor and a load of journos I never heard of are THE authority on football and I should check with them before daring to open my mouth with an opinion of my own. In fact, get rid of the F365 mailbox altogether and just publish a regular collection of their fascinating quotes. Nobody should be airing any opinions not validated by Andy Gray and Jermaine Jenas.

I should probably give the bookies back the money I won when I backed Tyson Fury to knock out Deontay Wilder at 4/1 as well. I’ll ask them to void the bet because every pundit said he’d either lose or win by decision. Scrolling back through my older bets, I see I’ve backed the likes of Southampton, West Ham and Sevilla at 2 and 3/1 this season. The bookies are always right though so I should ask them to void those ones as well.

Also, when I said the way Liverpool played against Atletico suggested they might drop points against Everton and City in their next games and this meant a severe drop in confidence and form was not out of the question but I’d still put actual money on them to get the points they needed against Villa and Brighton, what I actually meant was that it was more or less 50/50 that they’d lose the title.

Yours, spitefully and bitterly,
Eamonn, Dublin

After reading Oliver Dziggel, Geneva Switzerland mail this morning, I have to agree.  Most clubs have seemed to have their own agenda’s based on their current situation, and fully agree a points per game for Liverpool would negate the need to actually play any football.

As for the bottom clubs that have been demanding home games and dismissing neutral venues as it won’t be fair.  Maybe they should watch the Bundesliga where there is a trend since re-start where there are very few home wins and a very high proportion of away wins.