Home Mailbox Can you link Seaman with Firmino in five players or less? 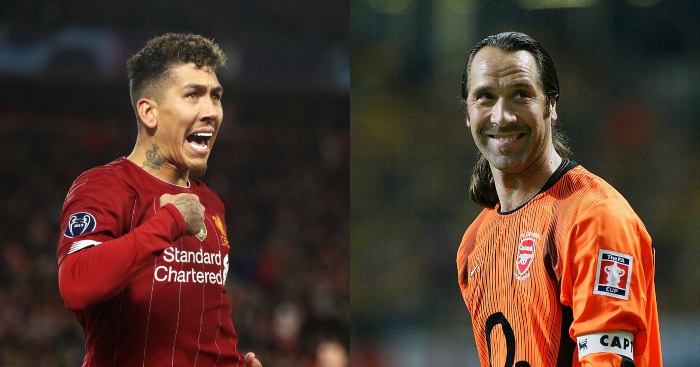 Wash your hands and send your emails to theeditor@football365.com…

Five players or less…
As we now have to adhere to this new ‘social distancing’ stuff, and because i’m outrageously bored, (I work at a University where 80% of my job is attending events, which are now all cancelled for the foreseeable!) I thought I could challenge the mailbox to some trivia. Me and my mates always play ‘5 films or less’ on long car journey, where we try to connect two movie stars using their co-stars. I have a feeling this is basically the ‘6 degrees of separation’ in game format, so let’s try it with football players! I’ll go with slightly different eras to make it challenging, but I think this starter for 10 is a bit easy.

Mailbox, here is your task. Can you link David Seaman with Bobby Firmino in 5 players or less? Bonus points if you can do it in three.
Lee (sorry to force the fun, but we need to stay sane in these weird times), LFC

On advice from the missus I fired up the old VHS cassette player this weekend, popping in my copy of the 2005 Champions League final to help with the withdrawal symptoms brought on by a lack of football.

How we won that game I just don’t know. Look at this Milan team:

Probably fair that they beat us a couple of seasons later.

Also being a bit older and kidding myself that I am wiser, I never really noticed how neat a footballer little Luis Garcia was. Even though the tailor seemed to have kitted him out in his big brother’s shirt and shorts.

So mailbox, in your older days, is or are there any footballers who you think you didn’t enjoy enough when you were younger?

No such thing as neutral!
Alex, London’s mail this morning about changing one result really had me thinking.  If he is happy to change the Arsenal/Barcelona result, just who does he support?

When it comes to being “neutral”, there are so many factors to take into account.  Can I really be classed as neutral if I’m an ABU or ABL, obviously many answers are going to be swayed by not wanting your biggest rivals to win a trophy or your own team benefitting from a different result, so ManU/Bayern, Chelsea/Bayern and ManCity/Leicester spring immediately to mind, but I was never a “neutral” going into those games.

For me, I can only be neutral when watching, say Chesterfield v Peterborough or Getafe v Levante and even then I’ll probably find a reason to pick one side over the other, really I’ll be hoping for a 5-5 draw or a mass brawl to break out.  Being neutral is just not part of a football, or any other competitive sport fan’s psyche, we may be not particularly bothered by the outcome but at some point, we’ll find ourselves rooting for one of the participants, usually the underdog.

So my completely biased choice would be Everton v Wimbledon as (other than LFC winning the Cup Winners Cup/Europa League) an Everton relegation is the only thing I’ve not experienced in my football watching lifetime that I would have enjoyed!  Worse still, I went to the park with my kids when they were 2-0 down and when I went to buy ice creams (what a good dad I am!) the seller had the radio on and I asked him the score, he replied “3-2” which I mistakenly took as being for Wimbledon.
Howard (would have wanted them back up the following year though, as runners up obvs) Jones

Turn back time you say Alex, London? I have indeed got a match in mind, 2008 Champions League Final, John Terry doesn’t slip, Chelsea’s first Champions League title and it was all over seen by Managerial legend Avram Grant, what a story.
Mikey, CFC

In reply to Alex re: If I could turn back time

I was on my first ‘Lads Holiday’ in Malia aged 18 having just finished college. We went to the cheapest bar we could find for a few drinks before heading out later on. We didn’t plan to watch the game but it happened to be on one of the many screens in the bar – as fans of any football we inevitable got sucked into the game and before long where fully fledged supporters of the underdogs Ghana.

For anyone that doesn’t remember the end of the game – Suarez cleared the ball off the line with his hand in the last second with Asamoah Gyan smashing the resulting penalty against the bar with the last kick of the game. Uruguay went on to win 4-2 on penalties and we left the bar utterly depressed heading straight back the hotel to bed.

A 120th minute winner for Ghana would have set us up nicely for a good night out, but it wasn’t meant to be. Cheers Luis Suarez.
Josh, Leeds

Players who we love that weren’t great
Ross and I went to see George Best play for Fort Lauderdale against the California Surf in Anaheim Stadium in 1979. We managed to talk our way into the after-game party, met with George, shook hands with Gerd Muller and then were chatting to Clive Walker, ex of Chelsea. All the players were being approached by the cheerleaders for autographs, who were, not to put too fine a point on it, hot. Of course, no one was looking at Ross and me, as we were, well, just standing there. Until!!

Clive says to one of the cheerleaders – “Do you know these guys? Tim and Ross, they are going to play for the New York Cosmos next year!”
What? We are??!!

“Oh hiiiii – Can I have your autograph? That’s sooo cooolll!”

Well – with the aplomb of two young men who had recently talked their way in by saying that George was a close friend, we adapted to our new roles immediately. On signing one, we were then on the roster and all the girls asked us for our signatures. We had our 15 minutes of celebrity! And got to the after-party after party!

All thanks to the blonde magician of the wing, Clive Walker!
Tim McKane

Nostalgia
For a football nostalgia trip, you should try out cestrian81 and gr8footy.   Lots of great stuff and a lot of it quite rare.
Matthew, Belfast

PS: David “the ERG are Nazis” Lammy is on Twitter begging the Evil Tor-ees to assume unprecedented dictatorial powers.  😂

Boris…
DL , LFC ( eerily quiet) Geneva wrote a letter that was as muddled as Boris’ response to the pandemic. Leadership is a quality evidenced by your character and behaviour, it’s not a given based on hierarchy. Neville may not understand how to govern in the same way, but he knows leadership, he’s experienced pressure and, much like any of us who’ve had a job, knows effective planning and action when he sees it. He’s also entitled to his opinion.

If you don’t think Boris is making it up as he goes, you’ve not been paying attention to the man’s career. Fired from The Times for making up a quote, he moved to the Daily Telegraph where he started the nonsense about the EU dictating banana curvature. Unable to stretch to reading his notes, his offhand remarks increased a Briton’s time in an Iranian jail and he managed to spin a fine tale about a bridge that was never built (yet still cost £50m) and was at it again recently, imagineering a bridge to Norn Ireland for a spaffing £15bn. It’s not about political affiliation, Boris is a proven chancer who makes things up. Then he lies about it. It’s what he does. There he is on This Morning discussing the idea of letting the virus run, unchecked, through the country. There’s his dad on the same couch saying it’s fine to go to the boozer. There he is talking about social distancing when no one’s ever heard the phrase and is unsure what it means. There he is telling everyone it’s fine to go to the parks. All while being able to see a neighbouring country, a fortnight or more ahead in the pandemic, showing the cost of not acting decisively. No one said that running the country was easy, but his apathy to the country’s best interests should disqualify him from a position of influence. In a parallel universe he’s working in the City racking up more abandoned children and that’s still too good for him.

Being kind to dreadful people is not a holy quality. Boris has taken the time to squat over everything and everyone he’s ever stepped over to satisfy his ego. The measure of a man is how he behaves toward the people he doesn’t care for. Go Google the phrase “and if that means some pensioners die, then too bad” and report back.  We all know Boris is a lout to wait staff, to wives and girlfriends and the journalists he conspires to physically attack. Kindness is the street Whatsapp group I’m in where I can see strangers mobilise to get Graham at number 6 some eggs as he’s blind and lives alone. Gary’s right, the nice folk on my street are right, the medical experts are right, the people staying indoors are right, you, calling for people to be nice to a horrible man fumbling the care of the country, are wrong.
Neil Hart

We’ll be lucky to see a 2020/2021 season
With confirmed cases on the rise world wide there’s no guarantees next season will go ahead. People may need to brace themselves for potentially not seeing another live game of football for a few years…

On awarding Liverpool the title (they do probably deserve it), relegation, and the rest – what happened for WWI & WWII?
Curious Dave (Not at Bondi) Sydney