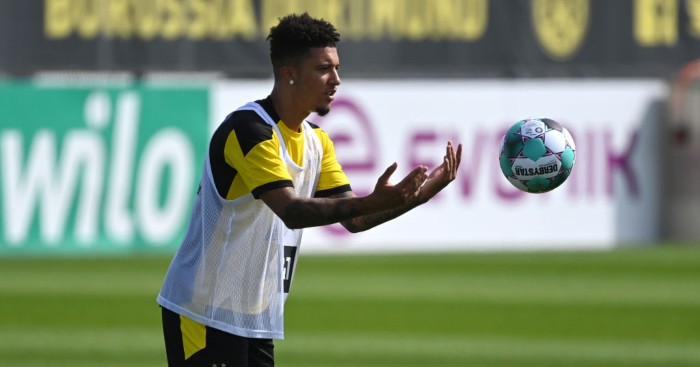 Keep your mails about Man Utd, Jadon Sancho and anything else coming to theeditor@football365.com…

It’s deadline day…
Today is the 10th August and supposedly the deadline for Ed to complete any deal for Sancho. Now this isn’t new for United fans, we’ve been here before. Ed trying to sneak a bargain and ends up paying the full amount. While this has been frustrating in the past, I understand his actions right now. Dortmund aren’t budging from the 120m€ valuation with United reportedly only willing to go as high as 80mil. Same tactics was used last summer with Maguire and it hopelessly failed. But I keep thinking, are there not other players out there who are as good as Sancho and could be signed for less. A certain Nicolas Zaniolo comes to mind and even Chiesa or Berardi. What do you think United fans? Who should we sign in place of Sancho should that deal collapse?
Fortune (yeah, I love Italian wingers), Nigeria

Frank Lampard…
All the hooha about Frank being better than X, a poor man’s Y…zzzzzzz

Chelsea under Roman turns over its coach every 14 months, I don’t see any reason for Lamps to break this pattern give or take. At whatever “premature” point the end comes, we’ll doubtless be able to name better Chelsea bosses who weren’t given as long.

I genuinely like Lampard and am more interested in how he develops after the inevitable split with Chelsea.
Aussie Red

I enjoyed the spirited defence of Frank to Tim Sutton’s ludicrous suggestion that he was mediocre.

(Paul Ensell, just to point out that Tim supports FULHAM. I laughed when I found out, I hope you get as much enjoyment too.)

Anyway the end of next season is going to be the first time to judge Frank, another top 4 finish is a must but clearly sorting out the defensive shambles must be top priority.

Sorry to see Willian going, he was popular but effectively he was demanding to be treated as an exception to the club’s policy of only giving out 2 year contracts out for over 30 year olds. He was 32 last weekend and he knew the policy but good luck to him if some other team want to take the chance on him.

What’s that? Arsenal want him? Bollocks to that, hope he gets them relegated!
JD

Newcastle fan here, so no bias regarding about what I’m about to say.

There’s been much ado in the mailbox about Lampard, and whether he’s performed better than Solskjaer and Arteta. And also much about his inability to purchase players, as if it is definitely a disadvantage.

Lampard has had a good season, but let’s not enhance the achievement because of the lack of transfers – it may have actually made his life easier.
Simon “More fun with Ashley!” S, Greater Manchester (in lockdown)

The glossy pieces on the Chelsea manager’s performance after the 7-1 demolition at the hands of Bayern is what we call the English Premium. Certainly Francesco Lampardzo would have been torn to shreds by the media if you catch the drift…
Keg Breezy, Nairobi

Thoughts on Torres…
A few thoughts on a few thoughts on Ferran Torres:1. If what’s reported is true: If you’re Valencia, having plummeted out of the Champions League places and looked awful post-restart, with an absent and hated owner widely perceived to be pretty awful at managing what is Spain’s 4th / 5th largest club, I’d be throwing rocks at anyone trying to abandon that ship to try and save face…
2. Wanting to be a top earner: If you are one of Europe’s rising talents and given the environment at Valencia, id want a truckload of cash to stick around. Also more money > less money.
3. Wanting to be a captain. If asking to be one of the club’s top earners was in good faith, this (if true) is a pretty obvious unreasonable demand. If I saw an opportunity to join City, and be managed by Pep, I’d do my best to make it happen. Short of putting in a transfer request this was a pretty clear indication he wanted out – and this came after the club shopped him around…
Reading the Marca article he comes across as a 21 year old who feels as though the individuals within the club have acted against his interests. He thanked the fans, said he’d love to go back (should those individuals leave), and generally speaking sounded like a good kid with a decent head on his shoulders.

Don’t know if he’ll be any good, but it won’t be because he’s a diva
Simon, (Willan? FFS…) London

Where’s the asterisk now?
After all the (very silly) talk of an asterisk against Liverpool’s Premier League win this season, I’m surprised that we haven’t heard anything similar in relation to the Champions League. After all, had last season’s quarter and semi finals been one-off games, the final would have been contested by Barcelona and Ajax.
Rob

You should be ashamed!
Okay Jas talking Cobblers, in bad times people lose their jobs and football is a business, imagine you get let go due to Covid-19 then a week later they take on Dave in Accounts pay him your entire 25 years wage just for agreeing to work for them and then see him get paid your yearly salary every 3 days. Football is a business but trying to justify getting rid of 55 people to save £2m a year then Stumping up a veritable fuckton of cash to lure an aging winger to the club isn’t business is just c*nts acting c*ntty and you should be ashamed of the club you support.
Paul Murphy, Manchester

Well that was an interesting article by John Nicholson but a few points;

Football is not happy but please realise the premier league has overpriced fans for more than 20 years. This is not new.

The premier league doesn’t need fans, this is not new.

The premier league is a self effacing greedy monster that has destroyed football at grass roots ( at the risk of parody, not new).

But. In saying all that I was just so pleased to see football back. (Actual full stop).

John please go back to amusing articles like the one with your partner watching the cup final, loved it. This is just “blah blah football is horrible”.

Just my two pence worth
Ade, ( Trent for poty) Guildford

I’m not sure what to make of John Nicholson’s disillusionment with the fact that football still exists despite fans being locked out. I thought we were supposed to be pleased that the season was allowed to finish and that the whole concept of professional sport has not been put on hold for the foreseeable future. I was certain it wasn’t going to be like this forever, and that clubs weren’t about to sell their stadiums and move into TV studios in Dubai or something.

But it seems I’ve foolishly fallen into a trap set by Big Football and its media stooges. Instead of being happy that millions of viewers around the world are still able to enjoy this stuff, I should have been thinking of the people who really matter – the tens of thousands of paying cheerleaders who used to show up to the games each week.

The deep-pocketed Arsenal fans who leave their seats empty to show how much they hate the owner. The Liverpool fans paying to wait decades for somebody to die so they can have a chance at buying a season ticket. The fans everywhere who can be seen streaming disgustedly towards the exits when the home team goes 3-0 down with 10 minutes to play. This is the lifeblood of football, and I for one won’t think badly of John Nicholson if he’d rather turn off his television set and watch some kids have a socially distanced kickabout in the park instead.
Martin, BRFC

On game day Me and my two boys travel into the city centre before finding a packed bus/tram/tube/train back to our house.  We then stand in the garden and pay through the nose to buy burgers and chips off the Mrs who serves us through the front window.  The next door neighbour then carries out the most basic and perfunctory search of the three of us whilst we then file into the front room, showing our tickets (which cost comfortably three figures) to the dog who bites them and hands them back.

We settle down on the sofa whilst the boys alternate between the expensive matchday programmes and their mobiles.  Gradually, the living room fills up with about twenty blokes who, though smelling strongly of alcohol, seem good-natured enough and there’s plenty of ‘bantz’ going on.  All of us sing the club song with gusto, then the whistle goes and we’re off!

Straight away, a section of our crowd start singing “Your support is f*cking shit” giving both the finger and the ‘V’ to the tv before launching into songs about Munich/Hillsborough and the like.  Then, whenever an away player is close to the tv screen, most instantly scream spittle-flecked abuse at said player, which my sons find both frightening and intimidating and they keep asking me why these men are so angry.  This continues throughout the game punctuated only by the occasional coin or lighter being thrown, the ordeal of the going to the gents during half-time, and the odd fight between home supporters around the couch.  To add further realism, a third of the home crowd miss most of the game whilst filming the action on their mobile phone.  Another third are watching the same game on Sky ‘Go’ because, otherwise, nobody has a scooby what’s going on whenever VAR kicks in.

Post-match, we spend ten minutes filing out to the front garden where a PC and PCSO from the local Safer Neighbourhood Team are waiting to have bottles and stones thrown at them as well as a constant stream of abuse and vitriol, something which my boys also find confusing.  The ‘away’ fans (neighbours from the next street) then have a fight with the ‘lads’ from our living room before Plod breaks it up.  (If the away team is Newcastle, then we bring in a pony from the local club so one of their ‘lads’ can punch it)  To prevent crushing, the Old Bill then have to make us queue for the next bus/train/tube/tram which will be crammed with p*ssed up football fans but we have no choice but to get on board, crushed up against drunken oafs.  An hour and a half later, we finally arrive back home.

I mean, what kind of idiot would want to save a few hundred quid, and hours of grief, whilst not exposing their children to scumbag knuckle-draggers and watching real-time replays of all the best bits of the game, with the food and drink of your choice readily at hand?
Mark (Tongue in cheek but not by much) MCFC