Home Mailbox Was that more delightful Leeds than ‘dreadful’ Liverpool?

Everyone is knocking that Liverpool defence but does that diminish how good Leeds were? 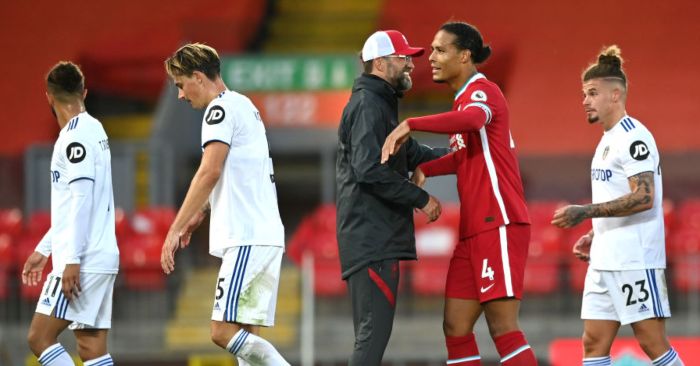 Send your thoughts on whether Leeds were great or Liverpool were rubbish to theeditor@football365.com.

Delighted but discreet
Ultimately I remain a bit scarred by Rodgers and Hodgson so I’m delighted whenever we win, regardless of the circumstances.

I can’t decide whether we were dreadful defensively or if Leeds were brilliant. I think it’s always a bit alarming when a team scores with all three of its shots on target. In the past I think we have been good at not conceding too many chances in great positions but today we were incredibly sketchy. VVD, Trent and Gomez all made mistakes in dangerous places.

On the plus side the front 3 looked amazing. Keita looked exciting and it was exciting that Curtis Jones got some meaningful minutes in the league. Perhaps he’s the reason we aren’t so desperate to sign Thiago?

The positive is that defensively we have been so solid in the past couple seasons and hopefully the team can improve dramatically in the next 8 days before we play Chelsea. I think next game we will see Matip partner VVD and Fabinho in the 6 role. This should help us be a bit more solid.
Minty, LFC

Losers = winners
And so the “ Man City are favourites” for the title propaganda continues.

Yes. Poor defensive display but a whole article based solely on that despite actually *winning * the game.

I’ve said it before, here it is once again. Losers column should be for teams that lose. We won.

It wasn’t perfect, but Leeds will cause teams big problems this season. Please stop the bleating. We are champions, we won, that’s what champions do.

Fully expecting 16 conclusions to moan about how poor Liverpool were. But don’t forget. We won.
Ade ( City win vs wolves and all the writers will purr over pep and coronate him as king of everything , ever, until they flop in the champions league again, then more excuses will come out from the media, city title favourites, bring it on) Guildford

Fresh Leeds
This is not meant to be patronising so please don’t take it so. Well f**king done Leeds. That is the best performance by a team at Anfield  that I have seen since Mourinhos Chelsea spanked us 4-1 in 2006.
Ryan

A few moments later…
Why do people always have to find the negatives in football? Oooo liverpool were bad, the defending was awful blah blah. How about being positive and giving credit to the team with a world class manager for pushing the champions all the way. Maybe it is I have a soft spot for Leeds because they hate the mancs just as much as we do but bloody hell give them some credit. Mind you that can’t happen can it as the media have to shove Liverpool in to the headline to generate the clicks.
Ryan, Liverpool

Absolute pony
Does Bielsa insist his players sport pony-tails as part of his system? It’ll catch on if so.

Mike drop
It was good to see Mike Dean wearing a mask over his mouth during the Liverpool v Leeds game. Nothing to do with the Coronavirus, it was just good to see.
Tim Royall GFC

I just wanted to say thanks to Mark Danger Endicott, MUFC for his kind response to my own, on the best position for our man, Brandon Williams, a week or so ago.  The reason for the delay, is that the day after I wrote in to the mailbox, my dog died, and I have been a blubbering wreck ever since.

While this sounds like a cunningly-contrived cross-up between the ‘the dog ate my homework’ classic, and the ‘my Gran died’ excuse, employed hilariously (and allegedly) *three times* by Stephen Ireland to escape national team duty a few years ago, it is merely the unfortunate truth.  Anyways (sniff)…

I enjoyed your email and take all points on board.  There is clearly a bright future for Mr Williams wherever he ends up playing!  Lets hope Mr Solskjaer is able to find his best role in the side.  There are good arguments on either side of our own debate – LB / RB / CM.  So…

He’ll probably end up playing at centre back 😉

Oh, and don’t worry about the initial ribbing on your part – I thought it was funny.

For myself and I guess many of my fellow reds, the important part of this whole thing is how fucking brilliant it is that we even need to have this sort of discussion, about just one of a growing number of academy graduates, slowly joining the first team ranks.  Happy days!

With respect to Pogba – I left him out on purpose because I don’t like him.  That is not to say that you are incorrect, more that his Social Media antics and Mino Raiola’s shithousery, have left me with quite a large dollop of distrust in the boy’s commitment to the club.  I must admit that I recently re-watched last season’s second meeting with Aston Villa, during which he did admittedly produce the kind of willing and enthusiastic, team performance that if repeated on the regular, would force me to change my mind.  Here’s hoping.

Peace and long life to all (and your dogs / cats etc., sniff.)

Bruyne food
Interesting eulogy from Johnny as always for a very well deserved and overlooked footballer bizarrely, why is that I wondered.

He is undoubtedly for me the finest footballer on the planet currently now that Messi and Ronaldo are slowly exiting stage left. His vision, touch, passing, shooting and execution  place him somewhere between Gerrard and Zidane (my highest midfield praise).

And yet I read the eulogy of this magnificent player and can only summon a muted admiration for his career. As with all things City I just feel myself thinking, who cares. I know that’s mean spirited and I know he doesn’t deserve It but it just how i feel it and I’m sure most football fans if they’re being honest know what I mean.

City were a great club with a loyal following, a tragicomic like history in recent times and the respect of the football world, why because they were real. City meant something to other football fans, but now it’s all a bit too manufactured to matter.

Spend billions of euro with profit from an industry that is literally destroying our planet, add in the awful human rights abuses and CAS case and we’ll that stuff sticks like, well, oil. And it sticks to some wonderful beautiful things: KDB, Sergio Aguero, David Silva. Yes we all recognise their brilliance but somehow it just doesn’t add up to what it should.

If KDB was running the show in Reals midfield for the past 5 years, if Aguero had played up front for United, if David Silva had weaved his magic in Liverpool’s midfield do you think they’d be remembered differently when they retired. If you don’t you’d be lying, they would rightly be regarded as absolute legends and the greatest of their generation instead of that faint smear of oil smudging their pictures in the hall of fame.

Playing for City carries a price, the price of true greatness in the eyes of the football world.

It’s not fair, but it is true.
Dave LFC

Rob the Liverpool fan could literally have just written the last paragraph of his rant and it would have conveyed his thoughts perfectly.

Goalskeepers
I enjoyed the recent article on goalkeeper goals. I realize that the criteria for selection was a goal scored by a goalkeeper playing in Europe’s top 4 divisions, but Oscarine Masuluke’s effort for Baroka FC in South Africa’s premier division warrants an honourable inclusion. A bicycle kick in the 95th minute from the edge of the area followed by a choreographed celebration – it does not get any better! Well worth a watch.
Nick, Durban