Home Mailbox Do Liverpool have the best second XI in the Premier League? 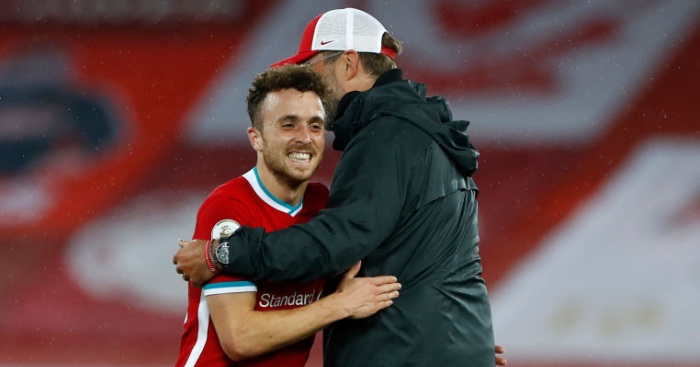 Keep your thoughts coming to theeditor@football365.com. We’d love to hear from you.

Do Liverpool have the best second XI?

As a Liverpool fan who is, god help me, starting to believe that Klopp is building a dynasty that could rule for the next half decade, I was looking at the squad that he has assembled in a relatively inexpensive manner (although let’s not go down the net spend rabbit hole again).

Assume that this is a typical first eleven:

Then we have this as a second eleven:

And I think that this eleven would compete in the Premier League, albeit in the bottom half. Actually, get Fabinho in that back four of the second eleven and they would be comfortably above the relegation zone.

And we still have options like Jones, Williams, Shaqiri, Elliot, Brewster and Grujic to slot in if necessary.

Would any other team have such a well balanced second eleven? My knowledge of our opponents is not as extensive, so I don’t know if anyone has built a squad like this. It’s a remarkable achievement and shows Klopp’s real genius. I would really doubt that anyone has a second eleven to challenge here…
Mat (Liverpool twat Arsenal on every conceivable stat and all the reports are complimenting how well the Gunners competed, which they did, but are we really that good these days? I still have this feeling of impending doom)

Great result and performance last night from the boys. The last two games against Arsenal both came with slight asterisks and left me thirsting for revenge so it’s good to put to bed those demons.

I’m really here to talk about the embarrassment of riches in our midfield at the moment. They weren’t up against the toughest opposition last night, but I would still describe it as almost the complete midfield performance for the occasion. It leaves me wondering almost how Klopp can even begin to choose between them every game.

Fabinho – Our best midfielder. Shut down most Arsenal attacks before they could get going (sometimes illegally) and generally makes the team feel like a safer place when he’s in it. Will be asked to slot in at CB regularly this season, but it takes something away from the team when he’s deployed too deep.

Wijnaldum – As if Klopp is going to let him leave this season. He plays every single game. I’m not sure if it’s just refusing to break our wage structure or him looking for a new challenge, but I’m still holding out hope for him re-signing. If not, let’s just sit back and enjoy one last season of watching him emerge from a huddle of 3 opposing players with the ball.

Keita – Showed more of the all-action side of his game last night that Klopp raved about before he arrived. We’ve seen the slaloming runs and 1-2s in flashes before, but in this game he was the complete midfielder. Sometimes dropping incredibly deep to take the ball off the CBs, and at others joining in the attackers to create a front 4 that gave no time to the Arsenal keeper or defenders. The number of times they kicked the ball into touch just to avoid giving it away was telling.

And those are just the ones who played.

Henderson – Adds leadership, drive and some incisive passing. You assume he plays when fit but he may not just walk back into the team giving the options available (Then again, we’ve said this before and he always seems to go up a level when facing competition).

Thiago – I was one of those rare few who didn’t think we needed him. But it’s clear he adds something completely different to the midfield. Will be massively important against teams who stick 10 men behind the ball.

Ox – Admit it, you forgot about him didn’t you? Replaces Keita as the one I’m most worried about this season. Needs to stay fit because he adds a forward thrust that the others don’t when available. Also our primary goalscorer from midfield (for now – see below).

Curtis Jones – Amazed by this lad. Plays a key role whenever he starts, loves a pop at goal and looks so composed on the ball. Even more impressive than TAA was at that age, though facing significantly more competition.

Milner – I genuinely feel bad that we can’t offer him more game time. Would do a job in 90% for the first teams in the prem (in like 6 or 7 different positions too). We’ll need him over the course of the year.

Grujic – Yep. Still here. Looked useful in the LC. Will probably crack one in against Arsenal on Thursday before heading out on his 37th loan spell.

There will probably never be a time when all 8 of these guys are fit. Half of them won’t even make the bench sometimes. So deciding on which particular set of midfielders are right for the job each game is going to be one of the most tactically interesting choices Klopp will have to deal with this season.
Ryan C, LFC

MEDIAWATCH: Liverpool out of ‘crisis’ (until they sign Dele Alli)

Keane thinking Liverpool were sloppy simply shows he and Klopp have different philosophies. Klopp wants players to take risks while losing the ball is anathema to Keane. That said, TAA did play some terrible short passes at times last night.

Keita has finally grown into that midfield. Much like Firmino and Fabinho needed time, so did he and now Livepool are reaping the rewards for the patience.

By the letter of the law Mane should have been sent off. I think the fact he was watching the ball saved him though he does have previous for a bit of dangerous play. Remember him almost kicking Ederson’s head off?

Lacazette. Dear oh dear. However despite the misses and the result, Arsenal continue to impress. Lampard and Ole could learn lessons in coaching from Arteta.

If Liverpool beat Leicester and City in November the league will be theirs again. Yes, I am calling the league over in November (this will come back to haunt me won’t it).
Alan, Córdoba.

Why always the Liverpool caveats?

Just wondered why all of the Liverpool successes come with some sort of caveat?

Liverpool break their total again to win the league – weakest English top flight in years (coming off all English European finals), hard for City to be motivated to win 3 titles in a row, season had to be paused and restarted. Still the “need to win back to back titles to be great” shout popped up before the season started.

Now Liverpool are continuing this form and all of a sudden if Liverpool do win that coveted 2nd league title in a row that all great teams apparently must do it will be an upset because if it isn’t at a canter?

I know we all like to analyse and find the alternative angle or go against the grain but as someone who held their hands up to United dominance and said “fair play” why do people struggle to do this so much while watching one of the Premier League’s greatest ever teams?
Paul Burke

My word Liverpool fans talk out of their collective backsides,  firstly you get Minty saying how noone ever in the history of football has ever had a harder first 3 games than a newly promoted Leeds team at home, a newly assembled Chelsea away and a work in progress Arsenal at home, yet because they are the bestestest team ever managed to get 9 points. Then you get Dazza having a go at Matt Stead for having the gal to suggest that Mane deliberate elbow to the head could easily have been a red, why? Well it happened in the first couple of minutes, so how can you give him a red. Liverpool are a very good team, shame their fans are such tossers.
Andrew goonerabroad Brown

In absence of it being picked up by Mediwatch, can I just give a shout out to Garth Crooks, who picked only one Liverpool player from their dominant performance last night. Who did he pick? The only player that made an error leading to a goal. Obviously Robbo also scored himself, and in Garth’s world, that means you’re on the teamsheet. Never change Garth, never change.
Mike, LFC, London

In a sign of how crazy this Covid thingy is going I found myself catching two games of yore on telly in the last couple of weeks or so.

What was instantly apparent in both games was the sheer chaos and distinct lack of control amongst most of the players. The matches included such luminaries as Cyrille Regis, Clive Allen, Chris Waddle, Glenn Hoddle, Ossie Ardiles, Roy Keane, Teddy Sheringham, Ian Rush, David James and, not forgetting, the great Trevor Peake…..

Pinball football, utterly terrible control and first touch, long balls to nothing, blood and thunder tackles, all cliches of the British game and, sad to say, absolutely true. That isn’t to say it isn’t an exciting watch but viewed from the modern gentleman’s eyes it was hard to appreciate it as nothing more than a lower league slog-fest, rather than the sophisticated and nuanced sport we appreciate and follow today.

But that was how we played the game back then and the effects of such an ingrained culture and footballing philosophy are still being felt in this country today and by that I mean the apex of the England football team.

Just look at the current options open to Gareth for positions on the wings (attacking and fullback) as well as striking options. Almost any country in the world would swap with us given the talent at our disposal. Someone like Harvey Barnes strikes fear into PL defences every week but is 7th or 8th on the list in terms of the wing forward roles at the moment and cannot realistically expect to get into the squad anytime soon.

But for those roles at the heart of the football pitch, central midfield and defence, where technique and tactical understanding are at their most crucial, we really are lacking in those world beating game changers. Phil Foden alone cannot be expected to shoulder all that burden and, Foden aside, not one English player is playing a crucial, pivotal role in a centre of a ‘big’ club across Europe. Until that happens, we will always be on the periphery for international success and honours.

I was prompted to write this as a result of the emergence, in recent weeks, of some exciting English talent starting and starring for PL teams. Lamptey, Harrison, Calvert-Lewin, Diangana, Justin and Bowen as just a few examples. I’m not remotely suggesting any will become first choice England players, let alone join up with the squads in the near future. But my point is all play in areas where we are fully furnished and have strong options, they join at the back of a long queue for their respective positions.

It would just be great to see someone emerge in those key central positions who are absolute game changers and, suddenly, our prospects could look very bright indeed. But is our game still so caught up in that blood and thunder culture of olden days that we are still not capable of producing such players who can control games and make that 1% difference between success and failure?
Rob (I don’t ask for much), Leicester

Mikey, CFC (Now could someone take the gloves off Kepa please and force themselves in goal?)

Didn’t David Nugent (playing for England) thundertwat the ball into the net when it was crossing the goal line form someone else’s shot a few years back and get awarded the goal?

That would have really pissed me off.
Bill, Aberdeenshire