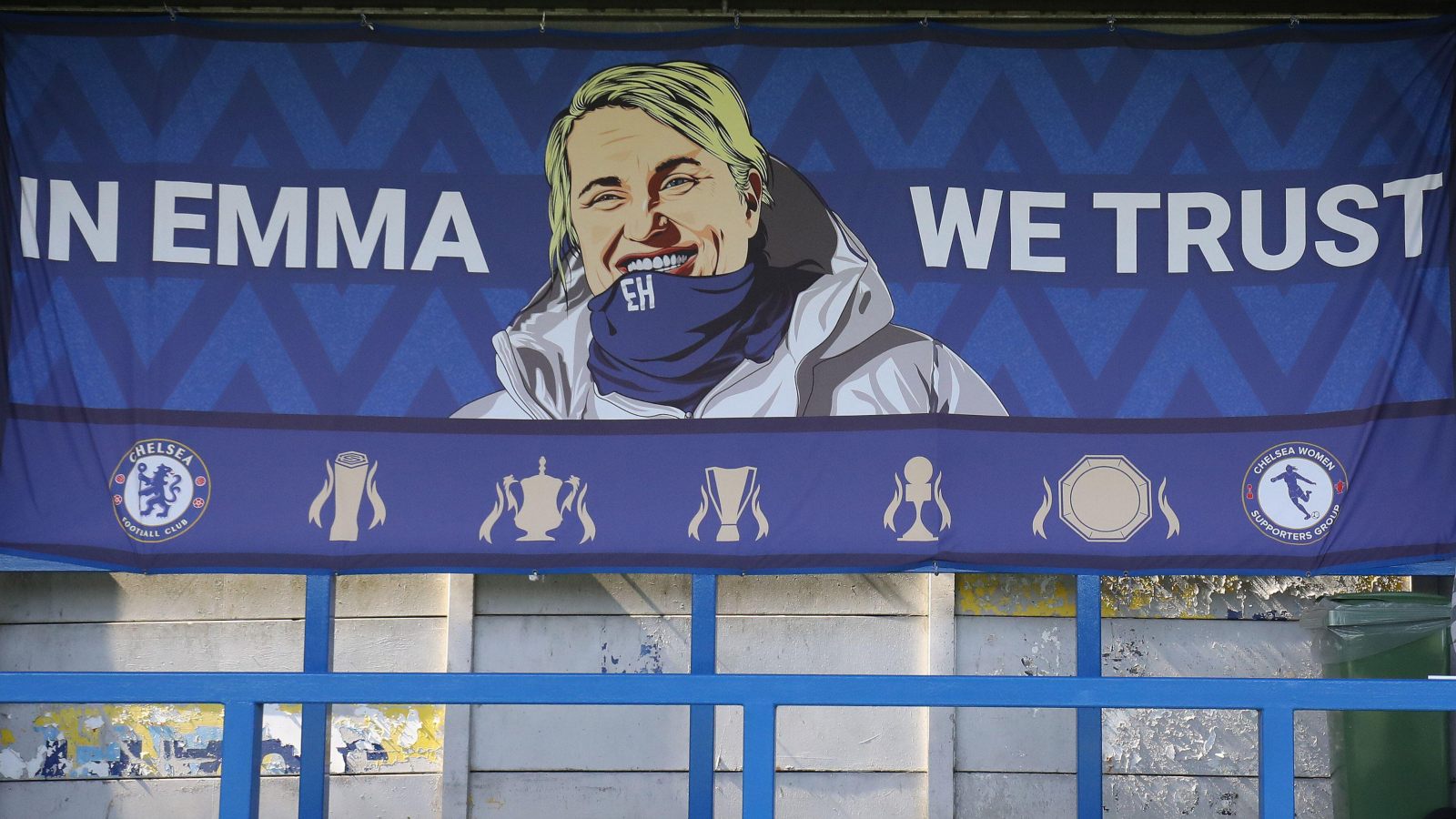 The campaign to get Emma Hayes the Blackburn job starts in the Mailbox. Also: City dropping points; and Liverpool lack character, you say?

Get your views in to theeditor@football365.com...

Hayes for Rovers
Would someone mind writing a thought piece on why Emma Hayes should be considered for the vacancy Blackburn Roverw job please? I’d love her to get it. It would be a ground breaking moment and I can’t see a downside. Moreover I genuinely think she would be great. A female manager needs to happen at some point for the sake of sane society and progression. Why not on a high achieving, proven manager at a historically grand club with history and potential? Imagine if she could take Rovers to the Prem! How many doors would that open for other good managers doing good jobs who don’t get linked to the male management jobs just because the chromosomes are different? And if she fails and it goes badly then so what? So the door remains closed a while longer but it is then at least ajar for the future. Great changes are often done in time. The time is now to give a proven manager a job at a high profile club. I’m convinced she’d do very well and for the club the publicity would be huge too. The only downside is that it’s not been done before at this level. But it has to be done some time, I hope anyway, so why not now?

Anyway, I’ll leave the proper writing to the awesome folk at F365 just wanted to say my piece and hopefully get some traction behind the idea.

City dropping points
In the immortal words of one Clive Tyldesley … “HELLO, HELLO HERE WE GO”
Mr K (Watch Liverpool ruin it by losing it at Southampton!)

Liverpool and character
I suspect I’ve just been fed a meal by a troll and yet here I am biting anyway.

‘ No character ‘ ? Carabao Cup winners, FA Cup winners, Champions League finalists and only just second in the League. What the hell would we have achieved if we did have ‘ character ‘? Won every game by 6 without conceding a goal?

And apparently all we do is draw or win by a single goal. It would be literally impossible for me to provide in one email the number of examples that prove what garbage this is.

We are one of the two best sides in Europe playing incredible football only matched by a generational Manchester City side. I think we have enough personality thank you very much. Tell me how many mere ‘ cup teams ‘ finish around 90 points as often as we do.

Bloody hell I’ve read some rubbish in my time, but that email is right up there.
James, Liverpool

…I’m sure that pathetically obvious and illiterate troll “Bryan” is furiously pleasuring himself in anticipation of the responses he will undoubtedly receive, but let’s give him his moment in the sun.

“They never win in style” – Finals are typically cagey affairs, but don’t confuse the score line with the quality on show (whether tactical, technical or physical), or ignore the performances that led to being in the final in the first place. Chelsea are a good team who played well, using a formation and counter-attacking tactic that specially seeks to prevent the kind of free-wheeling performance that Bryan seems to think is a necessity for a win in the final to be considered valid. (I know that object permanence is probably beyond Bryan’s limited mental development, but compare and contrast yesterday with Liverpool’s semi-final game against City.)

“This team has no character/personality” – This is literally (and I use this word in its proper sense, not how Bryan surely does) the polar opposite of what everyone (including non-Liverpool fans) says when describing this team, or does Bryan think that people are being ironic when they routinely describe them as ‘mentality monsters’’? Purely within yesterday’s game, how much character/personality does it take to go toe-to-toe with a quality opponent over 120 minutes in gruelling conditions, losing your top goalscorer and best centre back along the way, before winning on penalties? Or, purely off the top of my head, come back from three goals down against Barcelona?

“how hard the fake Klopp tries to pretend their underdogs” – I can’t think of any examples of Klopp (fake or otherwise) doing this. Although it is more likely an outright fantasy from Bryan’s deluded ABL mind, perhaps he is somehow confusing it with the respect Klopp gives to opponents. Plus it’s “they’re”.

“The great [P]remier [L]eague teams throughout the era would absoulutly [sic] destroy this Liverpool team.” – Pure conjecture on this one, as we will never know for sure. However, even the most one-eyed of United, Arsenal and Chelsea fans would accept that this Liverpool team would give those sides a good game, perhaps winning a couple here and there. Bryan’s hyperbole is a transparent attempt to continue to denigrate the achievements of this Liverpool team through some hypothetical scenario when the pesky facts of the trophies actually won by it don’t support his view in any way. Not that I want Bryan to ask for his carer to allow him access to email again to send another diarrhetic missive, but he pointedly doesn’t mention the recent City team (argued by many to be the greatest Premier League team ever) which Liverpool beat to win the title and have run extremely close on two other occasions.

Now, get back under your bridge.
Matt D, London

…Anyone else laughing hysterically at Bryan’s comment that this Liverpool team has no character?!

Is he having a ‘Bitter-off’ with his mate from Dorset?

…According to certain sections of the mailbox, Liverpool are a lucky team, with no character, an underperforming manager, who win “damp squib” finals. All I can say to that is long may it continue! 4 more years of this is fine by me!
Mike, LFC, London

…There’s a lot of very salty people in these pages.

A lot of people who refuse to admit that two teams who regularly provide 90+ goals each per season while battling each other for points totals that all previous champions have never achieved are great teams.

I get it, the two clubs at the top right now also happen to be at the top while your club (arsenal, United) are a mere shadow of who you used to be. And that stings. So of course you’ll think the 99 season or the invincibles were better teams than either of the current top two, because you want them to be. A strong sense of nostalgia, similar to how everyone thinks the <insert decade of choice> is better than today. That time wasn’t better than now, it’s just that those were the best years of your life so of course you tend to think of them fondly, incorrectly attributing the quality of life with the decade instead of the fact you were younger and had less or no responsibilities.

Similarly now you’re remembering <insert heyday> as being better than now because that was the best year of your football supporting life, when your team was at the top and the (football) world was at your feet. But they weren’t a better team. United won the league in their greatest season with 79 points and conceding 37 goals and scoring 80. Which would only be good enough for third place in each of city’s ridiculously dominant title seasons or Liverpool’s paltry 99 point season title. United’s actual best premier League finish is 99/00 with 91 points…which would still only finish third in all but one of city’s best seasons.

“But Liverpool get an asterisk because of COVID!” That happened after we had already wrapped up the title. Crowds were stopped when we already won. It was city’s title the following year which was the crowdless season.

You remember it being a better team and time because your team was the one winning and you felt good. You think today’s league is less competitive and more boring because your team isn’t and you don’t feel good.

Someday when Liverpool and city are shit we will look back and think this was the greatest time and teams because we were winning. Luckily though we don’t need to use nostalgia to feel good right now because we are the best two teams and we do win every trophy between us. Most fans can accept the United 99 team was excellent, and the invincibles were excellent, and Jose’s first title was excellent – so why is it fans now can’t just (begrudgingly) accept these city and Liverpool titles and trophies are also won by excellent teams?

The pen is mightier than the sword
Haven’t been able to find any official odds for this, but it would be pretty funny if Liverpool won app four trophies on penalties. League cup and FA cup done, can see it happening against Real, and although it’s unlikely, presumably a 39th game playoff against City could go to pens if we get there…
Paul M, AFC, London (the Community Shield, Super Cup, and Club World Cup on pens next season)

Why City signed Haaland
Haaland would have scored that penalty. Simples.
Rob, Dorset

This is the law, deal with it.
JR, Londonderry

Clarets corrections
Just wanted to write in re. your articles One Per Club Best and Worst of the season as I think Burnley have been unfairly represented – and those teams are not as strong or weak as a result.

The idea of not picking Tarkowski, because he’s Tarkowski is ridiculous. Because he plays for “Burnley” he has to miss out. What a nonsense.

We’re a tough team to break down and we have the best defensive record in the bottom half (bar one) and a better defensive record than two teams in the top half. At the heart of that record is Tarky. He’s immense for us. And we’ll miss him when he leaves at the end of the season for Newcastle or West Ham or wherever he goes.

That then allows you to pick Mane up front instead of Toney. And makes the team way more dangerous and likely to score.

As for the Worst Team of the season, picking Ashley Barnes is ridiculous. He’s barely played. Granted he is a bit crap and should be in the Champo, but that’s no reason to pick him for this team. He’s not played to show how crap he is.

You could take a look at Dwight McNeill instead.

I love the boy, but he’s way off form this year. No goals and only one assist. It’s clear why we’re in the relegation zone when you consider that, and that we have 75-year-old Aaron Lennon on the other wing. (We have the lowest goals scored in the league bar one).

Anyway, I’ve made your teams better and worse.

Refs with balls
What we need now is for referees to grow a pair and when called by the VAR faceless muppet to go and have a look at the monitor to have the courage of their convictions and turn around and say, “no, that’s bollocks, I’m sticking with my original decision “
Andrew Goonerabroad Brown

Credit where it’s due
TalkSPORT get a lot of stick for there business model (the physical embodiment of clickbait) and mostly I think we can all agree that it is generaly deserved.

But I would just like to give them a small bit of praise for yesterday.
Clive Tyldesley and Scott Minto on commentary for the Spurs vs Burnley game was really good.
They were clear, offered insight when necessary and really put across the game well.
Adrian Durham was also very good in his work around the Womens FA cup final.

It’s a shame with Adrian because it just goes to show that when he’s not being one of the worst,thirsty & desperate pundits in the media, he is a very good, balanced and professional hand.
Anonymous (as I’m giving praise to TalkSPORT I won’t give my name)