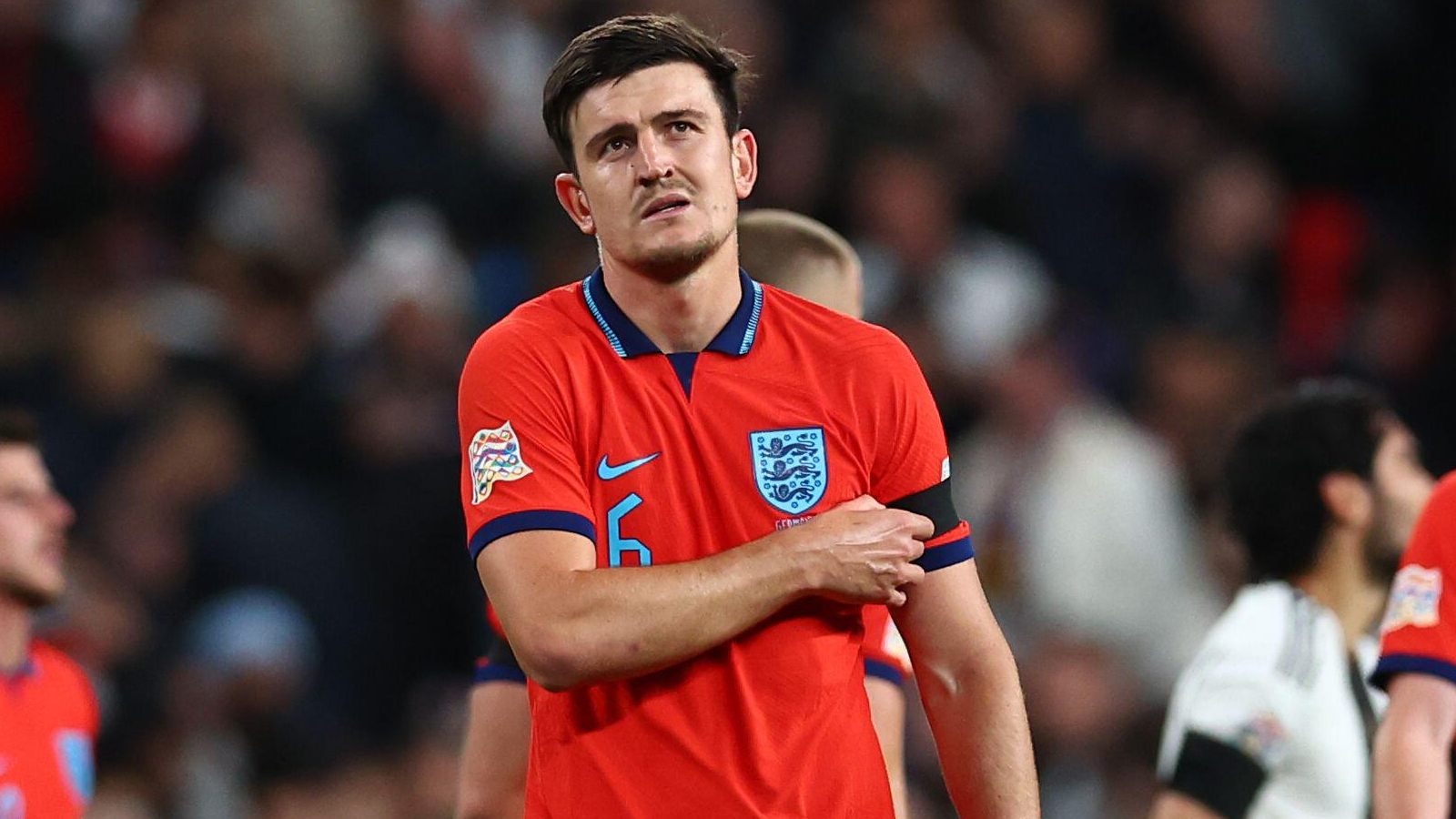 It isn’t just England, Gareth Southgate and Harry Maguire in the Mailbox. We have missives on the WSL weekend and more.

Southgate’s reasoning made clear
So we went more attacking and conceded 3, 2 of which were individual errors. That’s probably why Gareth doesn’t want to throw the kitchen sink at it. We have plenty of quality going forward, but we really, really don’t have the required quality at the back to compensate for that. Expose our back line and put them under pressure, and we’re a very soft target. He could remedy that and remove the culprits, but who are the replacements? There’s no easy or obvious solution to it.

On the plus side, Bellingham must surely have cemented his place in midfield. What a lovely player he is.
HarryB

Poor Harry
Managed to watch this England game in the USA.

Great comeback and unlucky not to win, where was that passion been in the last 5 games?

Listening to the USA analysts after the game, one of the first things out of their mouths was “I hope Harry Maguire starts against the USA in Qatar”

Gareth Southgate: So is Harry Maguire fit for an England squad?

Yes Gareth, he was at fault for both goals! He should never grace an England squad again!
Cowlick

…Right. That must be it. How is it possible to have any further, genuine, debate as to whether Maguire should be playing for either a ‘top six’ PL team or, especially, for England.

He is, as my late Gran used to say of such types “Nothing but a lumping Galoot.”
Mark (Mag to Grid = Get Rid. If you don’t know where this is from, ask somebody older. Oh, and who wore a uniform.) MCFC.

1. When they play with confidence, this version of the Southgate 3-4-3 (without the second defensive mid) is actually a really attacking formation. In the first half, they did just that and it was great. Of the front six, everyone other than James, who was anonymous, made a significant attacking contribution. With worse Germany goalkeeping, or a more consistent final ball, or perhaps if we had an English right back with a peerless Premier League assists record, we could easily have scored two or three.

2. That said, the three centre backs and two centre mids still seems the wrong way round. Germany could pass through our midfield two at will and the back three just weren’t in sync or mobile enough to justify using up the extra player. One of the benefits of the back three is allowing one to step out and press without leaving huge gaps, but they mainly just stood in a line across the box and waited for Germany to choose which gap to pass through. Getting rid of Maguire and replacing him with Henderson (or Philips when back on song) as an extra midfielder seems a natural step. It would strengthen the midfield in defence and, going forward, free up our best player, Bellingham, to be an (even) more consistent threat. A 4-3-3 does create gaps to exploit between the full backs and the centre backs, but it’s a price worth paying for the other improvements.

3. And we really must get rid of Maguire. All was not lost after the poor pass in the lead up to the penalty – there was an opportunity to show the Germany player outside and give our defence a couple of seconds to regroup. But instead he challenged him head on and kicked him as he went past. Then there was the pointless dribble to nowhere that lost us the ball for the second goal, followed by the jog back in the hope someone else would sort out the mess. Conor Coady isn’t brilliant, but he’s better than that.

4. But, the come back was really great. A lovely combination of exquisite skill (Bellingham, Saka, Mount) and classic Engerlund under-the-cosh-up-and-at-them stuff. Gives credence to the idea in the last mailbox that a big part of England’s Nations League problem has been player apathy towards the competition, which cleared for a while when they were staring down the barrel of a 2-0 home defeat to perhaps our biggest international rival. I hope that’s right because, overall, this was an England team performance I could get on board with.
Tom. LFC

Lucky Gareth
When I was a teenager, my cricket coach used to say to me “I’d rather be lucky than good.” It seems to me that Gareth Southgate is an extremely lucky manager.

If this tournament had been held in the summer we would have been out in the group stages as he has so far failed to evolve the team. However, by this point it is obvious to anyone with eyes that a) Harry Maguire should not be starting football matches for England and b) we have the quality and energy in forward positions that require a higher tempo style of play. Southgate has no option but to play Bellingham, Saka and Anyone But Maguire in a refreshed England setup.

Added to this four leafed clover are the kind draws in the previous two tournaments, the Lazarus-like comeback tonight and never mind the fact that he has regularly managed to avoid injuries to key players. I cant remember a luckier high profile manager in my lifetime; expect another deep tournament run.
Rob S

Jess Park- the 20 year old loanee from Manchester City played like a one woman highlights reel against Liverpool and ensured Everton have three more points that her parent club. She took her goal exceptionally well and was deservedly named player of the match. Surely an England call cannot be far away.

Forward lines of paired names- Arsenal had Mead and Miedema while Chelsea boasted Kerr and Kirby. In both instances the understanding between the pairs was excellent and they scored four between the four of them. Kerr should have scored but squared a chance that was begging to have the laces through it.

Manchester United- six points ahead of their local rivals and nine goals better off goal difference wise. They haven’t had the toughest of starts but, as my old dad always says, you can only beat what is put in front of you. They have beaten what was put in front of them and beaten them well.

Arsenal’s defence- 8 games now in the WSL without conceding stretching back to last season (obviously) meant that the game was effectively over once Beth Mead opened the scoring in the 5th minute. Tottenham are no mugs but you never thought the Arsenal goal was under threat with Leah Williamson and Souza Rafaelle close to perfect at the back.

Aston Villa- two wins from two with goals in both games for Rachel Daly (the signing of the summer surely?). Leicester weren’t quite the scalp of Man City last weekend but a great result nonetheless, not least as this was the first time Villa have ever won back to back matches in the WSL.

Katie Stengel- Liverpool’s new American striker opened her campaign with two in the win over Chelsea last week but they were both from the spot and she has offered little to suggest a goal from open play will arrive any time soon. Offers scant hold up play, cutting edge or leadership from the front. Needs to get up to speed very quickly.

Manchester City’s summer- their turnover was huge in summer 2021 and even more dramatic this summer. Starting the season after losing Bronze, White, Walsh and Scott among nine to leave was always going to be tough. I am not sure they believed it would be zero points after two matches tough.

Reading’s relationship with the refs- two weeks into the season and two weeks in a row Reading have felt refereeing let them down. They had some justification this week with an incorrect offside call denying them a goal. But hey, at least they don’t have to deal with VAR. And they deserve it for rearranging the Liverpool match in a midweek.

Leicester City- only held off the foot of the table by Reading. Not a great month or so for the City of Leicester to be honest.

Draws- no draws this weekend, no draws on the opening weekend. We have three teams on maximum points, three on zero points and a whole mush of teams on three in the middle. It is either win or lose at the moment, no room for both sides going away happy with a point.

Momentum- that’s it now for the WSL until 15 October as it makes way for the League Cup and Internationals. It wasn’t their fault that the opening round of fixtures were postponed but a break after just two rounds seems poor timing.
Micki Attridge