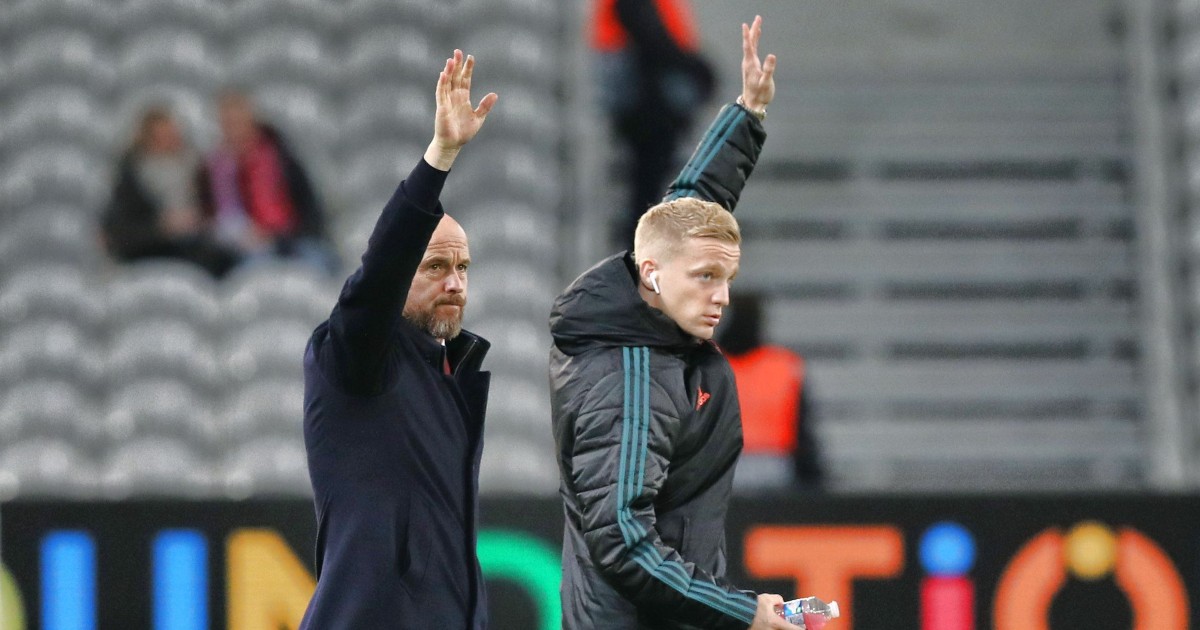 Keep your mails coming in over the weekend to theeditor@football365.com…

Hands off Ten Hag
When Manchester United inevitably get spanked by their skyblue counterparts this weekend the demand for OGS’ head will probably dominate the mailbox until the next Ronaldo bailout.

But before we embark on another groundhog week I would like to ask Manchester United fans and the like to stop suggesting a certain Dutch coach as his replacement.

Allow me to explain why Ten Hag wouldn’t touch the dumpsterfire that is the Old Trafford hot seat.

– Ajax just qualified for the knock out rounds of the Champions League, with two games to spare.
– Four games played, four games won, 14 goals scored, two conceded (one of which was a very soft penalty)
– We’ve beaten Sporting Lisbon away 1-5.
– Beaten Dortmund in their own yellow-wall-home 1-3 (and 4-0 at home).
– Seb Haller has scored 7 goals in his first 4 CL games ever.

In the domestic league we’ve beaten our nearest rivals in PSV by 5-0 two weeks ago. 11 games played, lost just once, 37 goals scored and just 2 conceded. (That’s 51F and 4A for those keeping score.)

And that’s just the on field performances, in the boardroom Marc Overmars and Edwin van der Sar are a rock solid combination.

So ask yourself, if not for the money (which he could also get elsewhere), why the flying f*** would he go anywhere near the completely out of balance ‘project’ at ManUtd?
There’s the Glazers, there’s debt, there’s Woodward, there’s an aging Ronaldo who must be played, there’s noodle sponsors and then they’re 8 points of the top spot and not even in top four right now.

At Ajax, he’s building a team again (after the 2019 De Jong, De Ligt, VDB, Ziyech squad) that is absolutely flying again and challenge for every trophy they compete in.

If he’s going to the PL, he would go to replace Pep or Klopp in two years time, now there’s your gossip.

United and leaders
“If you hear the sound of hooves, check first for horses before you look for zebra”.

The idea that Manchester United’s problems are lack of leaders is pretty funny, given the players they have in their squad. This casual observer would suggest the problem is the more obvious one which everyone is telling you is the problem, even the mean lady from F365.

To look at it a different way – John Terry was, I believe we can all agree, A Leader. Yet, he and Chelsea were rubbish for a season or so under Andre Villas Boas. Did he suddenly lose his Leadership qualities? Or is a teeny-tiny bit possible that having a shouty bloke on the pitch is less effective than a good manager who can do tactics and playing to the players strength and whatnot?

Side note: How weird must it be having a job when every day – EVERY DAY – people discuss if you should be sacked from it or not. That must take its toll on you and potentially screw with your decision making process.
Jeremy Aves

Conte, Levy and the impossible marriage
A lot has been said of whether Antonio Conte and levy will make it work or not. I think this is mostly based on the presumption that levy isn’t fit for the role and is too stingy with the purse strings. That’s why they lost world’s greatest manager pochettino.

And you can (and will) correct me if I’m wrong about that.

I don’t however think levy is unfit for the role. He’s simply trying to run spuds as a business and make sure they’re sustainable, much like FSG at liverpool. And like FSG levy has allowed managers to spend whatever they generate in sales mostly.

It’s often said levy not investing when spuds lost in the champs league final not only contributed to on field troubles but caused the greatest manager in the history of football pochettino to leave.

I disagree. Poch let levy down, not the other way around. Going into that final Lucas Moura had been spuds best player and honestly the player I thought might cause us problems. I prayed for Kane to start and moura to be benched since I was confident Kane would do nothing and worried moura would be a pain. Poch got his team and tactics wrong that day, he should have at least taken it to the wire but instead it was a fairly meek surrender. Liverpool were pretty awful that day and we were there for the taking.

Had poch won that final I’m sure levy would have opened the chequebook because he’s a man running a business, not an oligarch with a plaything. Spuds were not showing much signs of progression under poch, in fact league position had been regressing for three years and the year following their 2nd place finish they did sign Sanchez, moura, llorente, aurier, and gazzaniga. The signings were mostly covered by the sale of players – as is the spuds business model, a model poch knew when coming there.

After finishing 2nd, spurs finished 3rd then 4th. So poch didn’t improve whether money was spent or not. So why would levy again allow money to be spent with a manager who had already demonstrated he couldn’t quite make it? The safer option is to tighten the purse strings.

And while you could say that underinvestment is what caused the stagnation but then a good workman doesn’t blame his tools. Klopp won the champs league and the following year spent 8.55m and everyone said you HAVE to spend from a position of strength or you get left behind….except the only thing getting left behind was all the other teams in one of the most one sided premier League title wins in history.

I know it’s not exactly a 1 to 1 comparison because the club’s are a little different and the managers were vastly different. but through effective coaching klopp continually improved and we became a more effective team despite literally everyone saying we lacked depth and our midfield was weak. Poch didn’t.

TL;Dr Levy and Conte can work because Conte can get better performances from current players through coaching and tactics. I think spuds fans can be excited, I know I won’t look forward to playing spurs under conte.
Lee

Cowardly Gareth
It’s impossible to support England with this pathetic, cowardly idiot at the helm.

He plays football like he’s afraid of his own shadow and his fear of the untried and untested shows up in his squad selections too.

This selection is so poor, it surely makes Southgate a bad joke in the football community.

Including players so off-form or who aren’t even playing club football is an obvious no-no unless they are essential to the way you play (e.g., Kane).

Maguire, Stones, Mings, Shaw, Sterling, Rashford – they are not essential and right now, they’re garbage or just not playing. They could well turn it around but England call-ups should be earned, not be a given because Southgate “knows you”.

Also, I have no idea why Ward-Prowse or Coady are in the squad. They’re not bad players but there are others way more deserving.
He goes with players that he knows because he’s afraid of anything or anyone he doesn’t.

And then the nonsense “reasons” he gives for excluding premium talents like Smith Rowe – they’re laughable. Smith Rowe has been playing better this season than anyone in the selected squad except possibly for Mount (and that’s despite playing in a volatile Arsenal team instead of a premium Chelsea or Man City team). Instead, he wants Smith Rowe to continue in the U21s where his development will be slowed and injury risked unnecessarily. Arteta must be livid.

What must Smith Rowe think of this? That bias and preferential treatment stops his merited inclusion. Or how about White, Tomori… Chalobah has been one of the players of the season so far by eye and statistically!

I so wish the FA would wake up, sack him and put us out of his miserable existence. The only problem with that is they’re more stupid than he is. FFS.
Ben (London)

…England’s manager is a clown who will forever continue breaking the hearts of English fans because he will never win anything.
Today, he had a chance to lay down a marker and choose players for the next two world cup qualifiers based on merit, yet he flunked badly. Why stick with certain players because of their past performances, and leave out promising players to satisfy the overbloated egos of some?
His tactics show that he is the ideal replacement for one Norwegian up north who has been clueless for a long time.
With this line of thought from the boss, England fans should rest assured that “It is not coming home soon.”
Carey (baffled fan) Yiembe

VAR the last straw
To answer the question from my perspective – I’m no longer annoyed (imagine being actually angry about anything to do with football) by VAR because I cancelled my Sky Sports subscription, and no longer watch club games where it’s used.

I’d been losing interest in the very top level of the game for a few years, the money and ownership of many clubs are morally unsupportable – VAR was the straw the broke the camel’s back really.

I’ve not lost my love for football – nothing can do that, I just don’t much care what happens in the premier league past some Match of the Day highlights.

It’s an easy decision to make, since my team will never reach the heights of the top division, so I claim no moral high ground here, it just…is. Shame.
Jeremy (loving the increased Champo coverage on here) Aves

Under the radar stars
Time to break up the OGS and United chatter in the Mailbox with a potentially open question, does the Mailbox know of any players in Premier League history (or even currently active) that have gone as under the radar such as the likes of Marc Albrighton, he has nearly 300 PL appearances for Aston Villa and Leicester, won the league title and FA Cup with Leicester, has played in the Champions League, the scorer of the 10000th PL goal whilst playing for Aston Villa and been at Leicester for 7 years, still going strong as a fairly regular contributor at the age of just 31.

From the Chelsea perspective Robert Huth falls into this category, another player to play over 300 PL games, he has three PL titles during his time at Chelsea and Leicester, a third place finish with Germany in the 2006 World Cup and was a consistent part in each team played for during his career, from Chelsea, Boro, Stoke and Leicester, a key cog in that title winning defence.

So do any come to mind that have accumulated a lot of accolades, appearances, goals, assists etc yet are rarely talked about?
The Admin @ At The Bridge Pod

What makes a world-class training ground?
I was reading your article about what attracted Conte to the Spurs job, and I quote: “about the training ground, maybe in the world I don’t know if another club has this. I think it was one of the reasons I accepted them to come here. Because I know that here, I can work in the way that I like.”

What exactly goes on in a professional football team’s training ground? Isn’t it just a fancy gym, a couple of pitches and maybe a projector room to do video analysis? I would imagine a decent physiotherapy outfit as well. Perhaps some fancy high oxygen tents for post-match recovery? Is it that different from say, the training facilities at a championship club?

I am coming to this from a position of complete ignorance, having never played footy or been involved in a club side, so any anecdotal evidence would be much appreciated.
Mark

Continuing his last year with us

Anyway Bruno Lage what a man!
IrishWolf Dublin
PS would like to see more emails from other teams (WEST HAM WOW) (LEEDS EEK)