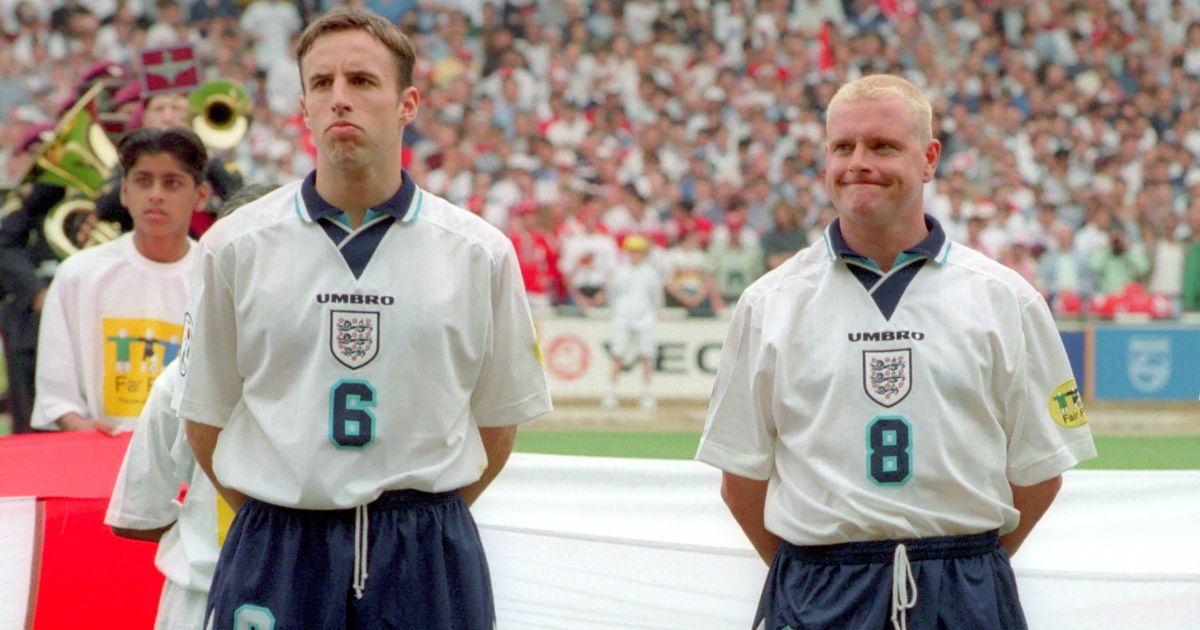 Wales are through and England v Scotland is around the corner. Get your mails in to theeditor@football365.com…

Get Gazza on the bench
I keep seeing comments on Southgate being the wrong man to lead England and that he’s not qualified for the position.
What qualifications does an international manager need? It strikes me that there’s no hard and fast rule for it.

England have gone down many routes from Robson to Taylor to Venables and Hoddle to Keegan. We then tried the club management greats of Sven and Capello. Their experience didn’t translate to the international game. It’s not so easy when you don’t have a cheque book.

So here we are with Gareth Southgate, trying his best to translate the German model under Low to England. To me, he’s done a fine job in changing the culture of England, getting rid of the old guard and moulding what is now England FC.

Remember, a couple of managers before Low, Germany reached two World Cup finals, winning one, under a former player who had no management experience whatsoever. What made him qualified?

Southgate is doing a tough job. The only thing I would like to see is some legends with him on the bench. Get Hoddle involved. Get Shearer. Get Gazza.
Look at what Italy are doing with De Rossi, Evani, Vialli and Lombardo helping out Mancini.
PeterB

Which England fans aren’t having fun?
This is getting tiresome.

Shehzad Ghias in Karachi’s in the afternoon mailbox is the latest missive about how miserable England fans are, why do they have unrealistic expectations, why can’t they just enjoy themselves, etc…

Enough please, just enough! Where the hell are all these people getting their insight into the mindset of the English (and to be clear, it is a single homogeneous mindset because, as Brexit demonstrated, there is no diversity of opinion among the English…)?

Shehzad cites the Sun (2.6m readers in all of Britain), and the daily Mail (2.2m, again all Britain). Even if all of those people were (i) English, and (ii) parroted the bile they write as if its their own opinion, that still leaves approx 52m English people who never look at them.

Maybe it’s the whiney emails after Sunday’s win in the mailbox, but I would respectfully point out that reading the mailbox is a bit like reading Trip advisor reviews, people with particularly strong views write in to vent their particularly strong views. It’s only ever five stars or one star, and in no way reflective of the average person’s opinion (three stars, would’ve been 4 if they hadn’t put the hot peri peri on my chicken when I asked for medium).

I enjoy tournament football fine for what it is. As I imagine did the vast majority of 11.6m people who watched the Croatia game did Shezhad, but thanks so much for your concern. But if it’s all the same to you, keep your constructive criticism of how my countrymen should enjoy football to yourself.
Andy (MUFC)

Italy’s peak?
Italy looked good again yesterday didn’t they? Although I think a site not a million miles said they haven’t beaten anyone that good in their, admittedly still impressive, run?

Maybe it is the cynic in me, but are they peaking too early? If I was Italian I wouldn’t care – tournament football can turn on a six pence, so enjoy it while the going is good. As an aside, for those who try and ridicule England fans for “it’s coming home” – most sensible fans know we are outsiders for this Euro’s, so we just want to enjoy the good times while they are here – I’m pretty sure Irish fans sing about Kevin Kilbane as if he is Zidane, so wind your necks in. The time for criticism and introspection is after the tournament, while it’s on, just enjoy it!

…Suddenly that person who drew Italy in the Work’s Office Sweepstakes is looking quite smug, genuinely impressed by Roberto Mancini’s side, maybe France won’t have it all their own way.

Turkey were the pick for the surprise side of the Euros before it kicked off, well they did surprise us all, surprisingly how poor they appear.
Mikey, CFC

Euros musings
This is the first Euros, first international tournament in fact, that I have watched all games live so far. So here are a few thoughts.

Players taking advantage of the head injury rule to get their team a break in play, even when it is clear any collision was nowhere near their head. Not much a ref can do, as the blowback would be huge otherwise. Expect to see this taken to a higher level on Matchday 3 and beyond as each game becomes more critical.

It’s hard to tell what differentiates the good from the bad teams – skill and formation – on some occasions. The thing that seems to differentiate the most, is the lesser ability of poorer players in controlling the ball. Even standard passes bounce a few feet away giving the presser time to scoop up the second ball. And then the really good teams can play the expansive passes that only a receiving player with superb control can take advantage. As to ‘shape’ and formation, we see teams like Finland that had a hard time breaking the Russian press out of their box, when there only ever seemed to be one other player available for the pass who was quickly closed down. As opposed to Sweden, boring through they are, keep their shape for thr 90+ minutes. And Italy, with some magnificent playing the ball out from the goal line while 3 or 4 Swiss were in the penalty area. Supreme confidence, elan, control and shape.

Can a team based on one great player be a great team? I was watching how Argentina (not the euros, I know) struggle to fit many excellent players into a team around Messi. I was thinking about this watching Ronaldo run into dead ends, trying multiple step overs as defenders, looking like Harrison Ford in one of the ‘Raiders’ movies where he bores of the swordplay and shoots the guy, tackles him. He was behind players while shouting at team mates they should have passed to him, him not passing, the constant histrionics at team mates, etc. The Portugal attack always ground to a halt when Ronaldo got the ball. He takes all the free kicks and wastes them, even though there are excellent free kick takers in the team. He grabs the penalty and then scores a final goal against a completely deflated Hungary. But really, the best thing for Portugal’s opponents will be Ronaldo playing.

While sticking rigidly to two banks of four might get you a draw, player movement, constantly providing your team mate a passing option, isn’t that much harder to drill into players and not only lets you evade the press but create more attacking intent. So far Italy have done this best, but England also did this well too. Just wondering why some of the lesser teams don’t do this and instead focus on the Hodgkin rope trick.

France and Germany disappointed. The Germany that destroyed Brazil a few years back did what I was talking about in the prior paragraph. That German team were far from the most gifted players but were the best team. While they had more of the ball yesterday, it was so pedestrian, until Can came on and was more direct. Would never have thought I would see Can as better than Kroes but…

On fitness. Interesting to see so many players cramping or going down with cramp. In the France game Griezman was everywhere. I think he literally covered every blade of grass. So it was surprising to see a team mate who ran less cramp up. Griezman was impressive.

The refs have been excellent. Something the EPL refs can learn from. The ONLY thing that I don’t like or truly understand is allowing clear offsides to go through to say, scoring a goal, and only then having the flag raised. On a couple of occasions there were scrambles with the goalkeeper taking a hit. What if there was a serious injury? It only sucks up time as you know they aren’t stopping the clock.

Goals, goals, goals
I’m from Canada, grew up for years in Honduras and I love football. I live in a country of hockey fanatics, which see games where teams usually score over 3 goals a game and I’ve been hearing the same thing from them about football for 2 decades: it’s boring, everyone dives. Here in NA, if a sports game doesn’t have a high score, it’s boring. I’ve never prescribed to this. Back when Ferdinand and Vidic were leading my team to a record book of clean sheets I was just as enthralled watching them spurn opposition forwards as I was watching Cronaldo cannon balls into the back of the net. To me a 1-0 can be as exciting as a 3-2 if the game has quality. I hate a high scoring game when all the goals are a result of horrid errors.

Now I’m not saying the opening England game was a masterclass of entertaining football, but I’m seeing a lot of English fans and fans from other countries calling games that have been high quality, boring. Someone the other day said the opening 80 minutes of Portugal v Hungary were boring. I’m assuming because there were no goals. But I saw lots of great defending and shots on target. Apparently Europe is joining America and Canada in the belief that if there isn’t a goal per minute, the game sucks. I don’t know if this generation just expects every game to be a PlayStation FIFA 8-0 or what, but I suggest watching games in their entirety and enjoying all aspects of the game.
Jamin

Storey’s Wales prediction
Wales to get 0 points, yeah? Do me a favour and show some respect. Semi finals in the last international tournament we were in, and we didn’t rely on about 427 Kane penalties or only beating absolute dross to get there.

Now onto the small matter of beating dark horses Italy…

Cymru am byth.
The Proud Shepherd of this Herd of Sharks

Le foot rentre a la maison
Just a quick mail to Ryan Palmer about Didier Dyche. As a french football fan i will let you have fun and be entertain by Gareth “too much right back” while we bring football home in our special tournament mode !

Hope to beat you in Wembley during the process.
Nabil (Pogba was using Manutd for a warm up before the real competition start)

France’s best ever
Not only is France’s best XI is just filthy, they’ve all won a major tournament. I had to leave out too many great players to name, and while this is very imbalanced since I am plugging in a bunch of 10s in the midfield, this team will be able to control the tempo, Flair, pace and physicality, This team has it all.