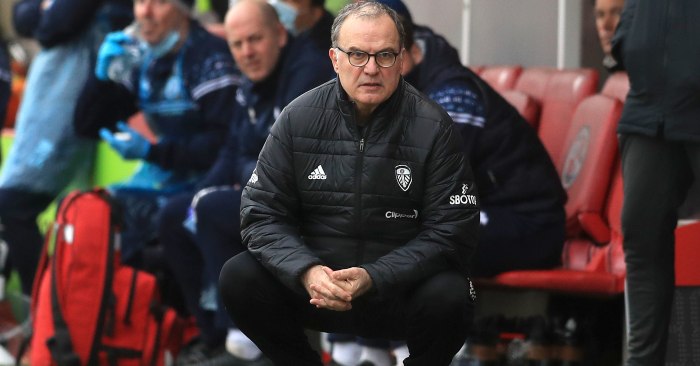 Leeds, Leeds, Leeds
Don’t get me wrong, I was hoping that Leeds would beat Crawley Town. Not because I had any interest in them doing well in the FA Cup, but just because it’s embarrassing to have lost. My dream scenario was for them to beat Crawley, be drawn against a good Premier league team in the next round, and then lose with dignity. Apparently they should have taken the cup “very seriously indeed”, but I have no idea why and I’m glad they’re out. Seven changes to the lineup gives you an idea of how seriously Marcelo Bielsa was taking this match, and “three shambolic half-time substitutions” seemed a lot more like resting a player returning from injury and giving a couple of others some playing time.

It may be that Chelsea or Arsenal win the cup every year, but outside the usual suspects Wigan were the last team to win back in 2013. That was also the season they were relegated. Before that it was Portsmouth in 2008, and while they managed to finish 14th the following year they were relegated the season after that. Cup competition is great for some teams, after all it gives Kepa and Donny van de Beek a chance to play. For teams struggling with injuries and focusing on staying up, not so much.

Sure Leeds not going to “trouble the top six”, but why would they want to? I would far rather they consolidate their position in the league than run the risk of qualifying for Europe through either league of cup. It’s wonderful for Spurs that they’re in the Carabao Cup final and they have an opportunity to win some silverware, but they have an established squad who have been challenging for league title for a number of years. Silverware is lovely, it’s so shiny and there’s a distinct shortage of goldware, so who wouldn’t want some? Given the choice between a cup and a place in the Premier League though, I would take the latter every day of the week and twice on Sunday (see what I did there).
Andrew – Canada (Leeds fan)

…Cup doesn’t matter anyway. We can concentrate in the league now.
Dale (Opinions are like the weather) Leeds

Kudos for Mourinho
I’m sure you’ll get a lot of these, but massive respect to Mourinho. As he pointed out the risk of injury was very real but he did everything that I’m sure the Marine players would have wanted. I’m sure that “The day Gareth Bale came to Marine” will be talked about for years…

Pompey are just going to focus on the League…

…Great day yesterday for Marine made even greater by the attitude and actions of Mourinho.

All week, he’s been nothing but class. From supporting the online ticket scheme to the team he picked to start the game and putting Bale on for the last 20 minutes to give the Marine players the chance to say they played against him.

The guy, rightly and often, gets a lot of stick for the negative football or for just being a bit of a dick.

Credit where its due though, he showed yesterday that at heart he’s a real football man with the utmost respect for the game.
Kevin, (Had to try so hard not to put “proper” in that last paragraph) ITFC, Vancouver.

Dele delight
Watching Dele Alli play like this really makes me wistful. It’s not gone away, has it? He’s playing with a confidence that seems nonexistent in the Prem.

One wonders if he’s playing for a transfer somewhere? Ahem.
Jon (Poch and Dele sitting in a tree…), Lincoln

Van de Beek and mistaken identity
I greeted the signing of VDB with a mix of pleasant surprise (we’ve managed to get one of the famed Ajax class of 2019) and a little confusion (wait, where will he play?). When we signed him, we had just put together an unbeaten run with a settled midfield 3, Bruno was the man, Matic the experienced calm one and suddenly Pogba wasn’t going anywhere due to pandemic finances. With Fred and McT proving to be able deputies (and now go to for big games), the VDB signing makes less sense every passing game and seems like a ‘grab the shiny toy whilst it’s still on the shelf’ signing.

So why the mistaken identity? Well for that, cast your minds back to the Ajax team which reached the semi finals playing great football with a core of homegrown talent. At the time, Barcelona were looking for a midfielder to replace Iniesta as Coutinho proved an incorrect fit, so they naturally turned to Ajax (similar style of play, same philosophy, the Cruyff connection etc) and signed the jewel in the crown – De Jong.
Except De Jong is not the player they needed. His strength is to pick up the ball from the centre backs, beat the press, drive the team upfield and pass to the more creative players, something Busquets is the master of. What Barca needed was a player to play intricate one touch tika taka to knit the possession further up the field, make space for Messi and occasionally chip in with a goal or two. That is what VDB was doing at Ajax and with Barca’s scattergun transfer policy, they ended up doing a reverse Gravesen.

With his age, natural ability and heavy investment De Jong has slowly adapted his game to suit Barcelona so he’s not going anywhere soon, and with Pedri stepping up this season to fill the Iniesta shaped creative hole in midfield they suddenly do not need VDB. In another timeline, UTD would get De Jong (the player we expect Pogba to be) and Barca get VDB as part of a sensible transfer policy.

Till then, we have to be patient with VDB as remember, it took Fabinho a while to integrate into Liverpool’s team (which seems to be a benchmark for patience). Form is temporary and all that; if it doesn’t work out, Inter will be waiting to take him off our hands.
Omer (stay safe, wishing you all well during the winter months).

An idea for the Euros
Hello everyone, hope we are all staying safe and well. I’ve been thinking about euro 2020/21 and have come up with an idea. The risk of doing 12 cities in 12 countries this summer is just going to make it impossible to host this in the way that was planned but I’ve got an idea.

Why not have one host city where there are numerous football stadiums, like London or Istanbul (just two off the top of my head with numerous top flight clubs) where there are a number of grounds already. This would mean very little travel for each team between games.

Those clubs whose grounds are being used can also donate the use of their training pitches so that teams can have somewhere to keep fit and work on tactics. You can then give each team a hotel in said city where they can have their own bubble. Finally, before each team flys out they will need to have a test for every player to prove they’ve not got the virus.

I understand there will be draw backs on this. First of all it will be a bit rubbish for the players having to stay in a secure bubble for a month. Secondly, even London with its numerous premier league and championship teams might struggle to give all 24 nations their own training ground and finally, is it really that important and can we not just cancel the whole thing.

If this is a stolen idea then I do apologise and if anyone can think of a better way to play it then I’d be happy to hear it.
Bernard (let’s be honest, lock down is awful so let’s give those players who’ve made mistakes a break) MUFC