As well as Fabinho debate, we have reaction to Timo Werner's move, Wenger retiring too early and much more... 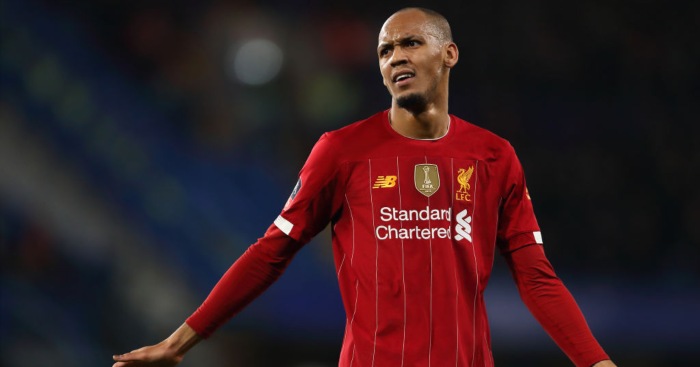 Fabinho isn’t even in the top three…
So Minty thinks that Liverpool have the best defensive midfielder in the league? That’s a strange one I don’t remember Liverpool pushing through a transfer for Kante or Fernandinho? Or is it Fabinho who was schooled by Billy Gilmour that your talking about? Because Fabinho doesn’t make the top 3 in the league, the podium places would go to kante, Fernandinho and Ndidi.
Aaron Grimes

Arsene Wenger retired too early
I’ve been thinking about which team historically would have benefited from the season suddenly being stopped at the start of March to be restarted at the end of June with no fans and seemingly no home stadium benefit.  For me, the clear winner would have been Arsene Wenger’s Arsenal.

February or March was the time of year when it all started to fall apart for dear old Arsene, these big losses that used to knock Arsenal right off their stride.

A 100 day break to regroup, calm down and focus would have been exactly what Arsenal would have needed following either of the infamous Birmingham games (2008 & 2011) where Gallas cried in the centre circle after Eduardo’s leg was broken or Martins won the league cup.  In 2008 Arsenal would go on to lose to both Man U and Chelsea and draw at home to Liverpool in the last few games, drawing 2 and winning one of those games would have been the title, in 2011 Arsenal would collapse and win 2 out of the last 11 league games, if they had won 7 of the 11 as they had their previous 11 games again the title would have been Arsenals.

Then let’s look at those one-off games they lost in front of intimidating fans in April and May.  Surely they would have had a better chance against Galatasaray in the UEFA cup final in 2000 in front of an empty stadium.  Then in 1999 would Berkamp miss the penalty against Man U in the FA Cup semi-final, would they lose to Leeds with no fans booing, that could have been the double.

Two Barca games come to mind, does Lehmann have the same rush of blood to get sent off in the 2006 final with no one in the stadium, Van Persie definitely does not get sent off in the Camp Nou in 2011 as he clearly would have heard the refs whistle instead of getting sent off for playing on.  In both those games we were second best so maybe not.

Am I saying that with a half dozen COVID-seasons Wenger would have won 3 more titles and a couple of European trophies?  Of course not, it’s ludicrous to even state that a once in a lifetime event like COVID could happen multiple times.

But equally when I think about the managers that thrived, prospered and won with the pressure and support that you see in the last couple of months of the season I must say that the 2 that seemed to do the best were Wenger’s old rivals Mourinho and Fergie, both knew how to get the crowd and players to work in unison to get any little extra, be it a few extra seconds or a couple of cynical fouls, I just don’t see either happening in empty stadiums when the referee and his assistants can hear every word from the bench.

Maybe I’m wrong, I’m sure those wonderful folks who like to comment below the line will let me know (while also proving how clever they are by pointing out my poor spelling, grammer).
Paul K, London

Timo Werner…
Delighted with the Werner transfer. Seems like Chelsea are starting to go the Fergie route in getting their business done early doors.

I have always had mixed feelings regarding Marina but she seems to be getting the job done efficiently, essentially a swap of Morata for Werner? Yes please.

I couldn’t give a monkeys whether Liverpool did or didn’t want him. My opinion was is that he’s one of the few available that would improve them and could fit into their system seamlessly.

I know Chelsea are already being written off by many fans, but it’s happened before and we’ve gone on to win the title. I can see us taking a step up next year and hanging around the top 2 a little longer. We’ve improved the forward line significantly, the young players are a year older, we have injured players returning in droves and also looking to improve the remaining areas of weakness with the considerable amount of dollar in the bank.

This and the overall response to the current situation as well as the clubs approach to dealing with racism, it’s a good time to be a Chelsea fan.
Adam, Midlands

I wrote to the Mailbox 10 days ago how I thought Liverpool should probably pass on Timo “I will wait a year to seal my dream move to Liverpool” Werner because he seems to be a messy hoe… And lo and behold he’s now off to Chelsea. I don’t know what’s funnier: (1) him proving me 100% right by heading to a club notorious for its dressing room drama, or (2) the size of the collective stiffy all the Chelsea fans have presented upon discovering they are on the verge of signing a German Michael Owen.
Oliver, LFC

Excitement crushed?
Just a question to other a Liverpool fans really.

A good friend of mine and my son in law both support Liverpool and they both have said that despite the season resuming, the excitement of a first title in 30 years has been totally crushed by all this and it’s a massive anti-climax.

Just wondering I guess if other Liverpool fans feel the same.
Bradley Kirrage

Charge of the voidbrigade
I see the ‘void it’ campaign shows no sign of abetting. Ken, and those like him, who of course have absolutely no vested interest in scrapping the season, desperately continue to make their voices heard.

I’m no legal expert, so forgive me if I’m wrong, but I’m not sure where the case for lawsuits would come from. Premier League teams have voted, in a majority, for all rule changes we will see. Unless there is something in the charter of the Premier League that forbids a mid-season rule change, then I’m not sure how clubs could sue for an agreed rule change.

No one would say this is perfect. No one wanted a pandemic. But I don’t see this, as Ken does, as some sort of unforgivable betrayal. I see it as clubs doing their best to get the season complete. And what is the alternative?

a) Continue the season with no rule changes: Risks injury, and in the case of neutral venues, possible spread of the disease.
b) Stop the season and use PPG: Surely not ideal. Surely clubs would rather play for their change to earn their results, rather than have it worked out on an average.
c) Scrap the season: Of course, what Ken wants, but the most preposterous idea of all.

I could go on. To say that continuing the season, with some very, very minor changes, is worse than scrapping a season that is three-quarters complete is surely just the straw-clutching attempts of a desperately myopic fan.

If you think lawsuits will follow from a few minor tweaks to the rules, what on earth do you think would happen if all the above were to take place?
Mike, LFC, London

Whilst a Premier League season consists of twenty teams, who each play each other twice, the composition of those teams are never the same (injuries, transfer windows, etc.) The Managers of those teams will change across a season. Weather, different pitch dimensions, lengths of grass, etc. (yes, I am being facetious).

A season doesn’t consist of homogeneous games between homogeneous teams under homogeneous circumstances. I agree with you on neutral grounds, & would be fine with finishing the league as is on PPG, but that wouldn’t be fair to many teams. But let’s not try to argue that the outcome of a league cannot be determined because of changes through a season.

Afternoon duly lost…
Picking up on Adam’s idea of trying to pick an XI across history and with no more than one player per club, I decided to try to do this with one player per decade for the last ten decades plus an eleventh from the first fifty years of the game.  It’s tricky:

20’s: Dixie Dean (Everton) – can’t leave out the only person with a 60 goal season. Striker (obviously).

50’s: This one’s a tough one, which I think boils down to England’s Billy Wright versus Wales’ John Charles (with due respect to the sadly cut short life of Duncan Edwards). As a Leeds fan, it pains me to leave out the Gentle Giant, but that opens up a spot for Cantona later, so the Wolves centre half gets the nod.

60’s: Wow! What choices – to have to leave out Greavsie, Bobby Charlton, Best, Banks…but I can’t overlook Bobby Moore (West Ham/ Fulham) (for captaining the victory in 66 and that tackle in Mexico in 70). Centre half.

70’s: Not quite such a wealth of choices. We need a goalkeeper – obvious choice is Shilts (best keeper + winning the league and 2 European cups with Forest) – but he also played for Stoke – so we can’t have him and Sir Stanley M.  So ironically his rival Ray Clemence (Liverpool / Spurs) gets the job.  Actually his trophy record is better anyway (5 league titles, 3 European cups, 3 UEFA cups, 2 FA cups).

80’s: The main contenders: Shilton, Lineker, Hoddle, Barnes all “cup-tied” by other players.  Bryan Robson would take out any of the dominant Man U players from later years – so Terry Butcher (Ipswich / Rangers) wins my vote to complete a back three, especially with the bloodied bandage.

90’s: Man U dominated the decade and though it’s harsh to leave out 13 time  winner Giggs, but for pure skill and entertainment, I have to go with Cantona.  (This also means no Ronaldo for the next decade)

00’s: With no Man U players and Arsenal Invincibles ruled out by Ted Drake, we have to look to Mourhinho’s Chelsea team for this decade.  Could have chosen any of Drogba, Terry or Lampard, but my vote goes to Makelele to play in the position he literally had named after him (remembering also that he was considered by many of Real’s Galaticos to be their best player).

10’s: Man City’s decade and again a host of possible contenders: Aguero, Kompany, KdB, either Silva, but my choice to solidify my midfield would be peak 2013-14 Yaya Toure.