Home Mailbox Could football be ‘better’ without pesky fans? 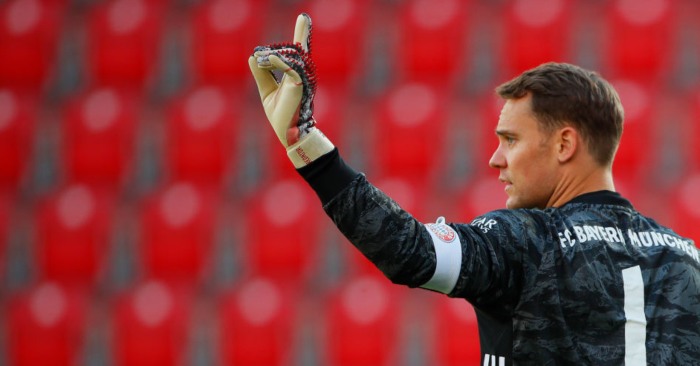 If you have anything to add on any subject, you know what to do: Mail theeditor@football365.com

Is football technically better without fans?
A request to the excellent Peter G: did this weekend’s Bundesliga restart in front of no fans mean fewer individual errors? Fewer misplaced passes than average? Fewer risks? Fewer dribbles attempted? Fewer tackles but more interceptions? More accurate passing? Fewer fouls? Fewer cards? I am very interested in quantifying the impact of fans on the game vs no fans to see if there is indeed a difference. Perhaps players are more relaxed and therefore ‘better’ with no fan pressure or whether they take fewer risks and confirm to tactics better as there’s no-one to entertain or show off to. I know Peter G would be all over this, but perhaps the data based on one round of Bundesliga games is not quite yet enough to form a conclusion.
Rich (is football ‘technically better’ without fans?), Cambridge

Why aren’t footballers already fit?
So, Steve Bruce and Raheeeeeeeeeeeeeeeeeeeeeeem Sterling now say we cannot start the EPL on June 12th but need to leave it until the end of June to allow players to get fit!

“What in the wide wide world of sport” have these lot been up to in the last 7 or 8 weeks (Watch Blazing Saddles to understand this phrase should you be too young)?

Weren’t they supposed to be getting their own training at home regimes sent specially by their clubs to each individual player, along with diets etc to keep them well, healthy and fit during this period of lockdown so as to when the call to return to their clubs and very well paid careers came, they would be ready and raring to go?

I miss football like hell but then I read some of this shite and think, you know what…I don’t miss some of the utter rubbish that comes with it.
Pick WWFC

Putting some Liverpool things straight
I suppose it was inevitable that this longish lock down would mean some pubs would be missing their bores and United fans would start making things up in their heads or just wilfully lying about LFC.

Now I don’t know if you’re allowed to show still images from certain games in your Mailbox, rights etc, but here is the offside decision, the correct offside decision against Shevchenko in the 2005 Final: 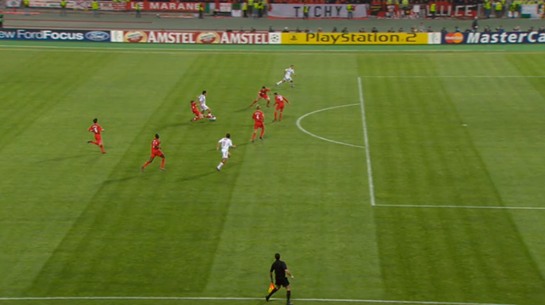 And never mind eh the already mentioned Nesta handball before Milan’s second, and the fact that there was no double jeopardy rule on penalties in those days and that Gattuso should’ve been off for bringing down Gerrard. Now in the interests of balance it should be mentioned the referee failed to spot the linesman raising his flag for an offside in one of the phases of play leading up to Smicer’s goal, but overall although lucky to win on the night in terms of all round play, we weren’t lucky with official’s decision. And besides, purely between Milan and ourselves 2007 made things all square on who got what they deserved.

I mean could continue with a quick precis regards United’s five European Cup Finals and the various incidents, moments of luck and all round quality of their play in those matches, but to be honest it would be like shooting fish in a barrel.

Re: Eddie (NI) and his letter re: Gerrard it was reasonable in parts, and to be honest I don’t really care what he did and didn’t do for the national team. Players who play as well for England as they do for their clubs over the course of a career are like hen’s teeth. But as Eddie tried to define Gerrard’s career as a deeper midfielder by pointing out three negative split second moments (actually I can’t even remember the Henry one that wasn’t the EURO 2004 one, hmm, can Paul Murphy let us know?), it would only be fair to point out things like him running the match from holding midfielder, getting a fantastic goal and an assist to boot, as a 21 year old when England won 5-1 in Munich in a shit or bust World Cup qualifier. And whilst not against a vintage Germany side, it was one good enough to pop up in the final 9 months later.

Oh and of course ‘the slip’. Yes let that define Gerrard’s ability in a deeper role, when having moved there out of age and squad necessity, he narrowly missed out on guiding his side to a title win against far better resourced opponents, and having been absent from the PFA Team of the Season since 2008-09, returned to it one last time due to his performances in 2013-14. But hey don’t let the professionals who played against him at the highest level for a full season sway you from agreeing with a bloke who wrote into the F365 Mailbox 6 years later.

But it’s true, in his pomp Gerrard didn’t have the composure and nous to control the tempo of a match from deep or central positions like the four players Eddie mentions. He’ll also be jealous of their medal collections. However Gerrard could function at the highest level in a greater number of positions than possibly any other player in the Champions League era, and if he didn’t have a home that’s because he could be a 5 star hotel in several sort after locations. Whatever floats your boat I suppose.
Bobby Bear

The answer is simple; two poor seasons at Juventus.

Signed to replace Angelo Peruzzi, van der Sar never settled in Turin, with numerous poor displays damaging not only the club’s fortunes on the pitch, but also his own reputation.

He struggled in his first year, but hopes were high that he only needed a period of adjustment, and his second season would be better.

Lowlights include being responsible for conceding a goal from a free kick at his near post, resulting in elimination at the group stage of the Champions League.

And weeks before the end of the season with Juventus 2-0 up against Roma and on course to top the table, conceding two sloppy goals including a last minute equaliser.

Roma would win the league, and van der Sar would be replaced by Gigi Buffon.

As the man himself said to FourFourTwo, he was unable to move to a big club; “I saw it as maybe taking one small step back in order to then try to make several steps forward further down the line.”
Dario (talking about Juve flops, whatever happened to Thierry Henry?)

How did that happen?
Further to Graeme, Glasgow’s email about top quality players going to poor teams, how about Pierre-Emerick Aubameyang going to Arsenal?
James Jones, STFC (or Suarez to Liverpool at the time it happened)

A tense second-leg affair at a stadium masquerading as Bramall Lane. The A-Team find themselves 2-1 down from the home leg.

The affair starts brightly with the Bees attacking down the left before Berbatov slips Berkgamp in with a lovely slide-rule pass, blocked by Alisson. Ballack then bloody well breaks the crossbar with his shot! I’ve never seen woodwork ripples in the game before! One worries for the A-Team here.

Things settle. Berbatov tries some weird self-volley thing and misses. Bale smashes a good effort wide. Alli then breaks free at the other end and slips one under Barthez! Lovely goal! But it’s ruled out for offside by the VAR-est of margins.

Beckham then wastes a shooting opportunity trying to slip Berbatov in. Bale has a header pounced upon. The ball is then worked the other way and is worked to Arteta on the edge of the box between Aguero and Aubameyang, who curls it in to the top right-hand corner! 2-2 on aggregate. Ancelotti still looks like he has raised himself from a bed of needles.

Berbatov restarts things with a shot outside the box, comfortably saved. Gareth Barry tries to smack one in from 40 yards to comedic effect. Arteta shoots wide from just outside the D. Half-time looms. Bergkamp then finds Ballack alone in the box with a cross, who plants his excellent header millimetres wide of the upright. Alexander-Arnold then twangs Baines up on the right before finding Aguero in the six-yard box with a lovely ball who slams it home! The margins on this one! Both had been non-existent up until this point.

The ball is worked up to the A-Team goal nicely between Beckham and Berg to little effect and the counter-attack leads to a fierce Aguero shot palmed out for a corner by Barthez. Little else happens and half-time arrives.

The second-half commences with Bruce chopping down Aguero in the box with appeals to the ref falling on deaf ears. The Albion persis and Aubameyang latches onto an Alli through baill to slip the ball past Barthez into the goal but is unluckily ruled a yard offside. Beckham swivels onto the next shot which goes over. Midfield jousting sees Beckham penetrate down the right wing a few times. Allen is then subbed on for Anderton (eye-roll). Aguero then plays Aubameyang through in the box again whose strike is deflected by Barthez’s arm on to the left-hand crossbar and the rebound is snatched off his head by Berg! What a save that could prove to be! TAA is fouled by Baines in the same area as the non-penalty from the first leg and Bale is taken off for Barnes, to play golf presumably. Aguero chips the ball in and JOE ALLEN with the overhead kick into the top corner?! Ancelotti is a mastermind. 4-2 on aggregate.

The A-Team are cruising here but retreat and Berbatov fires just wide from outside the area. He then heads a strong ball from the D at goal forcing Alisson to intervene for a corner. And he does not relent and a neat 1-2 with Beckham sees the latter blast a shot from Valhalla across goal into the top corner from outside the box! A beautiful goal; one which blows the doors back open in this tie with just 20 minutes to play (and one why I use to justify this exercise to my wife ad nauseum). Replays show Alisson got a hand to it but that just makes it better, really.

Two minutes pass and Barnes pulls back to Barry who blasts past Alisson to make it 4-4 on aggregate! A-Team are rocking here! Arteta gets played through but Barthez blocks. Ballack is then taken off for Barkley. Mad world, the alphabet. Berkgamp does a Cruyff-turn on the left of the box and slips a ball to Barnes whose shot is well-saved. Bruce blocks an Alli shot on goal. Barnes again tests Alisson resulting in a corner. Beckham then backheels to Barry who crosses for Berbatov to leap like a salmon over Azpilicueta and bury it to snatch a lead in the tie with less than ten minutes to play! Collapse or resurgence, you decide. Ancelotti becomes Unai Emery. Benitez feels like he’s in Istanbul.

Tammy Abraham came on but nobody noticed. Nothing really happens as fate runs it’s course and the B-Team proceed to meet the C-Team with Cantona, the Three Coles, Coutinho and Crouch led by Conte. We breathlessly await…