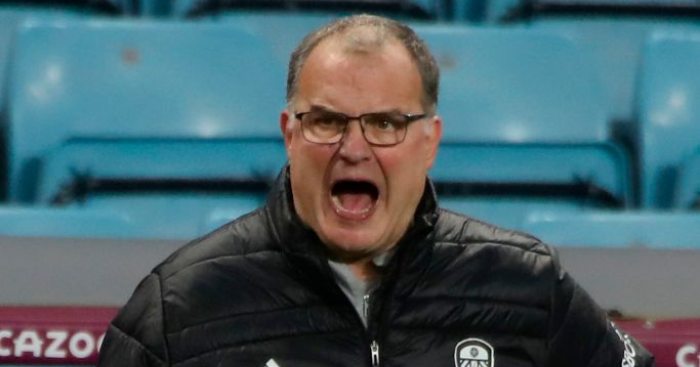 Keep your mails coming in to theeditor@football365.com….

I’m not sure if Gabby Agbonlahor is a frequent reader of your mailbox, but if he is, Gabby; you look like a prize plum.

For anyone who doesn’t know, after defeat against Wolves by a deflected effort, Agbonlahor couldn’t hide his excitement at the idea that Bielsa was a myth and Leeds had been found out. Rather than acknowledge the football Bielsa’s teams play, he doubled down.

All away from home, without our captain in defence, and our anchor man in Philips. Oh and a right back in the middle of defence.

It was absolutely sublime. If that is the Bielsa myth, sign me up.
Mat, Liverpool

As a Villa fan I just wanted to say what a phenomenal team Leeds are. A true representation of what a class manager with a clear philosophy can do. We are lucky to have them and Bielsa here.

From a Villa perspective, we needed a grounding and my God we got it. As Dean Smith said, this is the first bad 45 minutes (second half) we have had. Let’s just reset and get onto the next.
Paul (not Conor Byrne) O’Sullivan

Is anyone else really happy for Patrick Bamford?

It seemed certain to me that he was like Jordan Rhodes, David Nugent and a whole bunch of strikers who were prolific at Championship level but couldn’t make the step up.

Delighted to be wrong, he comes across as a goodun.
Graeme, Glasgow

Why is Joey Essex playing right back for Villa?
Liam, London

I saw a post by someone in your mailbox last week on how the VVD injury has all but ended Liverpool’s season.

What an idiotic kneejerk reaction!

Seriously? I don’t think there was even a small fear in the Liverpool defence that kicked ass in Amsterdam midweek.

VVD is important to our defence, no doubt. His aerial prowess is a huge threat at corners and his overall defending skills have no match.

But did you know that even with VVD, Liverpool have conceded 25 goals already since the start of June.  So, he was there but not helping a lot in improving clean sheets.

One of the things Klopp has done well is improving the squad depth. His multi-positional players like Gini, Milner and now Fab are re-inventing themselves and excelling at it.

So if I am a LFC fan, I will be excited to see Gomez and Fabinho/Matip renew a new partnership and get us back on track in the league.

I am an optimist but such knee jerk reactions within 5 games of a season belong to the bin!

#WeGoAgain
Tejas (Hoping Gomez and Fab notch their first clean sheet of the season this weekend!) LFC fan from India

It will be a nightmare to fix…

I am against gender inequality and sexism completely, but it needs acknowledging that it is a nightmare to fix it in the real world without creating more issues as a side effect and that’s what we are seeing here.

Players shouldn’t touch refs, but the strength of the reaction is founded in the fact that Aguero was doing this to a female referee. I know my mind instinctively jumped to seeing her as a victim of sexist behaviour, needing some kind of protection from a man.

In an equal world this leap of judgement doesn’t happen. We think – You can’t touch a ref like that. A booking is in order, followed by a reminder from the FA that touching a referee in any way is not appropriate no matter how casually. Instead we are shouting “sexism!”

Let’s look back at Wrack’s comparisons with other situations. “It is not OK to touch a woman like that in a club/bar/place of work.” Why only women? Is it OK to touch a man like that in those instances?” In most instances it seems to be seen that way. And this is because our fix for gender inequality is not to eliminate it, but to create a new kind of unequal. We are now expected to vet interactions with women so as to not be perceived as sexist. Rather than to vet all interactions equally as to whether they are respectful to another human being.

We live in a world where the fight against inequality has inadvertently also created the pressure to be seen as being on the right side. Everything from hastily drawn up hollow disclaimers on websites and youtube channels supporting Black Lives Matter, right down to the little disclaimer I put at the start of my own email because I fear people will prejudge my moral perspective. In today’s society more than ever, there is a need to be very careful about image. Simon’s words sum up the issue. “…the contact Aguero makes doesn’t have to be borderline molestation to be perceived as subconscious or conscious sexism.” The message is that if your actions/words could be perceived (prejudged) to be sexist, you become the wrongdoer by default. The “solution” is to treat women with more care than men. An fear-fueled overcompensation. Instead of forgetting the gender of the person we are talking to, we become more aware of it than ever.

Don’t get me wrong. We have come a long way from the darker days and the battle against sexism needs people to continue questioning things that haven’t caught up. Yet I will return to my original point. There is no way to fix sexism cleanly in the real world without other issues cropping up. There are some people who are noticing the flaws of the solution and are calling it out, and there are others who seem to believe that following an ideal makes the methods to achieve it unquestionable.

The yellow card was missed and that was an on pitch error. Afterwards an FA statement reminding all players touching a referee is a punishable offence, and gives the message that any such future incident will be treated with appropriate action. Maybe a change of rule that allows punishment post-match. Treating this as if Aguero was being patronising to women and so should receive a greater punishment is in itself a patronising act. You can’t expect anyone to treat female refs with equal respect if you are treating them differently yourself. In fact you create more issues. I do believe that the calling out of this incident has done more damage than good.

Finally Simon wants some examples of players feeling it is alright to grab a ref from behind. Search Lionel Messi’s hand on a refs shoulder. No punishment. Messi actually pushing a ref. No punishment. Pogba holding ref’s head. No punishment or even an article condemning his actions. Where does the Massey-Ellis incident rank in with these examples?
Nick

I have one simple rule. Would you do or say it to Tyson Fury?

Simple point is with this one…. Don’t touch the referee then you don’t have this problem.
Rob, Brighton.

Listen to people who don’t support your arguments…

Simon, thank you for de-escalating, because I was expecting a different response. But I also don’t want this to drag on so I just want to re-iterate my point since you technically slightly missed it before snidely implying that I, and other people who disagree with you, don’t have female friends.

What my, your or other’s friends’ opinions are shouldn’t actually matter in this situation. Hear me out, it sounds more crass than it is.

The whole issue started because your gf had an issue with it, and since we humans tend to keep circles of people who think similarly to us, I would assume most of not all of her/your friends will share the same opinion. Amazingly, my gf responded with “for that?!” when I showed her the incident and said “well this is about to be a huge ‘issue’ in the media” aka she thought it was nothing out of the ordinary. Surrounding yourself with the same opinion isn’t always helpful.

So instead of listening to people who will support your arguments, listen to people who don’t. Try to understand why they don’t agree with you. Why you are being called out for virtue signaling.

Maybe there’s a reason.
Maybe you wouldn’t have said shit had your gf not expressed her view, which you then backed.
Maybe you would have cuz you’re a true gentleman and hold open all the doors for all the women. I don’t know. But what I do know is that if you have an issue with refs being touched, you approached it poorly before lashing out at others who reproached you for your attempt at nobility.

Because I get your side of the argument, I just think that its adding to the problem, whilst you think you’re resolving it.
N.V.M. (Arguments lose potency when you start name calling. But if you want to do some reading, google the consensus bias.)

FAO Fans of Every Other Team,

We are so fucking proud of Marcus Rashford.
Oisín, Kildare, Ireland (MUFC)

After reading the article on online abuse, Rashford doing wonderful things and similar articles on f365 and elsewhere, I have a few questions that I hope mailbox can clear for me. Most of these articles take a clear issue, talk about the clear right and wrong and invariably blame the right for everything and anything that is wrong. In the Rashford case, has the Left solved hunger or poverty? Or is the author implying somehow the left is always marching on the right path towards an ideal world where no wrong happens and never intentionally puts a foot wrong? Is the left media so morally, ethically right always? Are all the self-proclaimed leftists always good intentioned souls who always do the right things?

The author paints all politicians with the same brush but specifically calls out the right wing media. Has the left media never gone on a witch hunt of the sane one?

Regards,
Marching ahead left and right

PS – when you stand against each other, your left is their right, their right is your left

Good Email from Met in Helsinki

It really got me thinking…

Do you slag someone off or slack them off when you talk behind their back?
Dale

Given that the Newcastle and Leeds fans set such a fantastic example by raising money for local needs rather than paying the ludicrous PPV fee I’m hoping Arsenal fans will also follow suit. Credit to Arseblog for the link here, but perhaps this could be shared to do similar.