The Mailbox has Gary Neville pinned as Rick from The Young Ones, while supporting Man Utd is like voting for Trump... 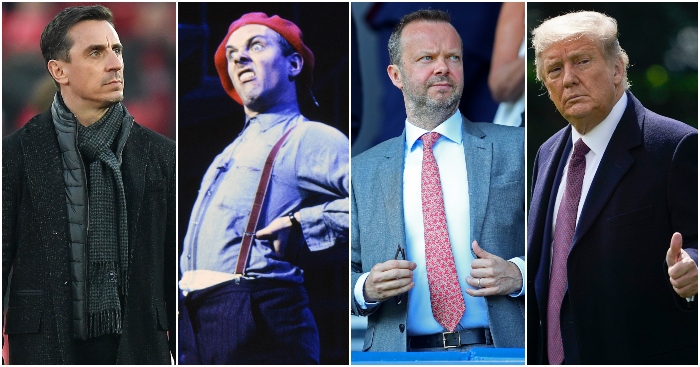 Just like Rik Mayall in The Young Ones, Gary Neville has decided to form a movement that includes him and some other people nobody knows or cares about. Because someone clever did it first.

Unfortunately, Neville lacks the charm of Rik. Which is indeed a deliberate and vile insult. Yet, also a truism.

I am so pleased they know “how to save football” where nobody else does. Not even the big and clever boys.

Because obviously football needs a whole lot of saving, as we can all see. Well, maybe at the dross end where Neviller operates it does.

I am now bored of commenting on him.

Being a United supporter is like being a Trump supporter – you buy into all the bullsh*t, know it is bovine faeces, know he only cares about his best interests, and you still buy the stories he comes out with… enter Glazers.

With the international break over, it is both sodding obvious and unfathomably mind blowing that Ole is still at the helm.

On one note, watching us get slightly edged by Spurs was like watching your beloved dog be euthanized for 90 min. Poch would have time to at least email his ideas to the majority of the team on international duty and The Magpies would be a welcome return with a new man at the helm. After all, it’s not like the board backed Ole in the transfer window and brought in HIS players to make HIS squad

‘Tother note, the Glazers and Woodward have a manager who is going to keep us ‘there abouts’ in the league and managed getting into the Champions League…we can float on that marketing ammunition for probably another season or three of relevance…after all, being champions doesn’t shift noodles, cars, wine, get you to think about going to the Middle East…you only need to be relevant and a known ‘brand’…Ole will keep the brand ALIVE!!! What a lovable mascot who won things for us, leads us AND will tie the party line

On a serious note, I’m not in the UK, but I understand we’re PPV this weekend. Please don’t, just don’t. The 2 clubs in question in this match have terrible owners who don’t care about their supporters, but more than that, please don’t help support a club who’s owner won’t even return a portion, let alone reimburse loyal season ticket holders
Liam, Manchester via Philly…like most Man U fans, I live 1,000 miles from the stadium!

England are, and have been since I can remember, a second tier international team. I’d put them in the same category as Switzerland, Denmark, Chile, Sweden etc. Will get so far in a major tournament but as soon as they come against a tier one team that’s it. Just look at their recent results in Nations league. They have seven points from four games when really they are lucky not to have just two. They beat Iceland, when it should have been a draw, drew with Denmark even though Denmark were the better team, beat Belgium after Belgians gave them a lesson in the first half but for some reason went into second gear for the whole of second half and then last night lost to Denmark.
As I mentioned Switzerland, I must say I am impressed every time I see them.
Drew 3-3 with Germany on Tuesday and were narrowly beaten by Spain.They don’t have any superstar players and most of their players play for unfashionable clubs all around Europe. The manager has them well organised and they like to pass the ball. Granit Xakha is the guy who makes them tick, taking the ball from keeper to start attacks and always seems to be available for a team mate. if only Arsenal had a player like that!!

The Nations League is brilliant. Sort of

James Wayne wrote a fine mail on how great the Nations Leagues is. I mostly agree with him:

It replaces boring, useless friendlies. And its format is great: all relevant games between evenly matched teams.

As he puts it in a nutshell:

Well, yes. The Nations League show how international football doesn’t have to be as tedious as the endless qualification stages for the Euros and the World Cup.

But quick now: who are the current Nations League title holders?

The format is indeed brilliant. The promotion-relegation system gives everyone something to fight for. The four-team groups ensure the fixture list doesn’t drag on forever.

But does anyone really care about who wins the thing? I’d rather we had proper qualifying stages for the big international events and abandon the Nations Vase altogether.

Buzzing for the derby

I hate to say it, but we’re going to get hammered tomorrow. As day follows night, we’re going to wet ourselves and lose. After the best start for ages, it would have to be that lot next up, wouldn’t it?

So I thought I’d drop this question into the mailbox to break up any Man United or England talk, what is the question you may ask? Well here we go….

Who is your personal favourite Cult Hero from your club’s history? So a player who wouldn’t have legend status, but remembered quite fondly and positively during their time at your club, if you’re wondering if a particular player is a legend then ask yourself would they get a statue built outside of the ground?

You get your facts right

Fair play to Johnnybruff for calling me out.
Not like in the first line of the second paragraph I said “Bar City Utd have the highest gross and net spend in Europe.”
You also point out that Chelsea have “nearly spent as much as Utd.”
This still means Ole has spent more then Chelsea…which was my point.

Great to have you so much on top of things keeping an eye on the mailbox “inaccuracies”.
You’re doing a cracking job.