Home Mailbox Here’s the PL’s goal of the season, and other mails… 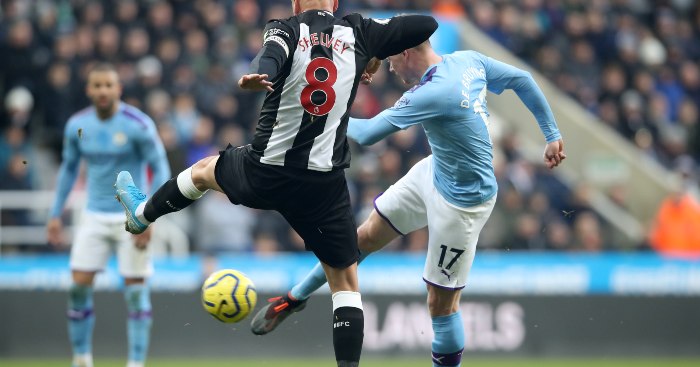 Scrap next season
Just read the article about Ferdinand’s call for the season to be declared null and void. Ferdinand speaks a load of bs. Like Karren Brady. Of course everyone is aware of the pandemic. Everyone is concerned about the effect on the health and welfare of others during this time. And yes, football is just a game. I get all of that.

But why void THIS season? Why not NEXT season? Or plan for a shorter NEXT season? Ah, player contracts etc. Bulls***. Either way there are going to be MANY logistical problems to encounter, whichever way it goes. And that’s besides all the human suffering and lifestyle changes that most of us will have to go through.

I think Ferdinand is speaking through his a***. Like Karren Brady. He is using the current situation and the compassion that he, I believe, genuinely feels, to somehow come up with a solution that suits him.
D, Cape Town

Have I missed something? Why is the only solution being talked about to void this season? Why not just skip next season? This season can then be re-started and finished with no pressure on dates it needs to happen by, no fixture congestion, players get a good rest for the euros, etc, etc… I’m sure there’s loads of financial reasons why this doesn’t make sense but this to me makes the most practical sense.
Matt

Prem camps
Reading the Independent today, I’m delighted to find that the bigwigs at the Premier League not only read F365 but took heed from my letter. Result!
Rob

Pirlo’s personal life
I hate to dispel Johnny’s notions over Pirlo, but I think it’s worth pointing out he did have an affair which broke up his marriage. Wonderful player, but if you’re going to fawn over him as a person as well then I think it is only fair you present a full account of his less than savoury personal exploits.
MN Aditya

Goal of the season: Kevin De Bruyne vs Newcastle
Lee’s Runner up is my winner, is there a more satisfying goal to witness than a thunder-bastard that goes in off the bar? the answer is no.

Runner-up: Fikayo Tomori vs Wolves
Now that is how to score your first goal for the club, damn!

Best kit: Crystal Palace Away and Chelsea FA Cup Anniversary Kit.
We have a tie, I just like the look of both, this one is always down to personal choice.

Goalkeeping howler of the season: Roberto
So bad he got sold in January

Kick in the bollocks (metaphorical): Leeds United
You finally did it guys, you’re returning to the Premier League……….oh, okay that sucks.
Kick in the Bollocks (literal): Maguire vs Batshuayi.
Cannot argue with this one he picked.

Most Unexpected Performance by a Struggling Team of the season: Norwich 3-2 Man City (Or any Norwich victory)
Norwich have won 5 league games all season, they have beaten City, Everton, Leicester, Bournemouth and Newcastle, two of those are in the top three, nope, not a clue.
Best hair: Todd Cantwell.
Agreed again on this one with Lee

Worst hair: Harvey Elliot or Hector Bellerin
A tie for me between these two.

Signing of the Season: Mateo Kovacic.
Technically he was on loan last season, but he has been our player of the season, his game has changed dramatically under Lampard and without that transfer ban I doubt we would have activated that option to buy.
Would-be Story of the season, had they not ruined it by actually winning the actual League four years ago: Leicester City.
Well, I cannot give it Arsenal can I?
Coup of the season: Leicester selling Harry Maguire for £85m.
Well played, replaced with Soyuncu who has arguably been better than Harry this season.

Holidaymaker of the season: Paul Pogba.
Keep forgetting he is still a United player, agreed yet again with you here Lee

Fall from grace of the season: Ryan Fraser.
Last summer linked with some big clubs, didn’t get his move due to multiple reasons, openly admitted he downed tools and now would be lucky if a Premier League club took him on next season when his contract expires, ouch.
“Carrying a team on his back until it literally breaks” Award: Jack Grealish
Without Jack, well, I cannot see how Aston Villa would not be bottom of the table, honorable mention to Danny Ings as well.

Bastard of the season: Coronavirus.
Agreed again Lee.
Mikey, CFC (Would be great to see more End of Season Awards from readers/writers)

Prem XIs
Blimey, Alex, London, how many coaches and horses shall we drive through your “best XI from a traditional non top 6 club”?

It’s good to educate the young ‘uns, so let’s tell you about the days before Chelsea won the lottery and when Tottenham were an endless mid-table irrelevance. You know, as in your word “traditional”?

Well guess what? Everton won the league (twice) and won a European trophy. Leeds won the league and made a Champions League semi-final. Newcastle had 4 successive top 6 finishes (twice runners up) and made 2 successive FA Cup finals.

So that rules out Martyn, Baines, Coleman, Speed, Ginola, Shearer.

And if your version of “traditional” actually means “current”, then let’s remind you that Huth played for Chelsea; Zaha played for Man Utd; and Ginola played for Tottenham.

So we’re left with Morgan, Le Tissier and Vardy.

…Since i’ve seen a few ‘Best of EPL nation XI’s i thought you’d never get around to doing one for Australia. Since I’m bludging and ‘working from home’, I’d thought I’d contribute.

LEFT BACK: Stan Lazaridis: Solid for West Ham, as well as a stint later at Birmingham, although liked attacking more than defending.

CENTRE BACK: Lucas Neil: Things went a bit sour not too long after his big West Ham move, where he threw on a the charm for the fans a bit too much. But for a time was always one of the most solid defenders not from a ‘Big 4’ team.

CENTRE BACK: Tony Popovic: Just beats out Craig Moore & Hayden Foxe. Also scored one of the greatest own goals ever. Heres to him coaching back at Palace one day.

RIGHT BACK: Brett Emerton: Not a right back, but Emmo can play absolutely anywhere on his day. One of the best premier league engines ever, always punched above his weight in a Blackburn squad who also did the same.
DEFENSIVE MIDFIELD: Mile Jedinak: A Palace legend, and was absolutely immense for them under Pulis, and did well to hold a starting XI spot when Pardew tried to change things up.
CENTRAL MIDFIELD: Aaron Mooy: The only current player in the team. Has had an amazing turn around in fortunes since not being able to get a game for St Mirren, to a 9 Million dollar sale from Man City. (More than City actually paid for its Melbourne club)
CENTRAL MIDFIELD:Robbie Slater: Scrapes in as he’s the only Aussie to win the league with Blackburn. Pacy and good on the ball.
LEFT WINGER: Harry Kewell: Debuted for Leeds at 17 years old. The greatest pure talent we’ve ever produced. Extremely unfortunate injuries affecting him so much during his time at Liverpool. Could have reached truly great heights.
RIGHT WINGER: Tim Cahill: Another who can play anywhere in the attacking side of the pitch. One of the greatest headers the league’s ever seen and just always seemed to pop up when Everton needed someone.
STRIKER: Mark Viduka: One of the best frontmen when in form and on his day. An absolute monster of a player. Sadly ended with a not great stretch at Newcastle and drifted off to the coast of Croatia.
Also credit to Josip Skoko: Highly underrated, very technical. Had some very solid seasons at Wigan.
Noel