Home Mailbox How to end the GOAT debate and win football… 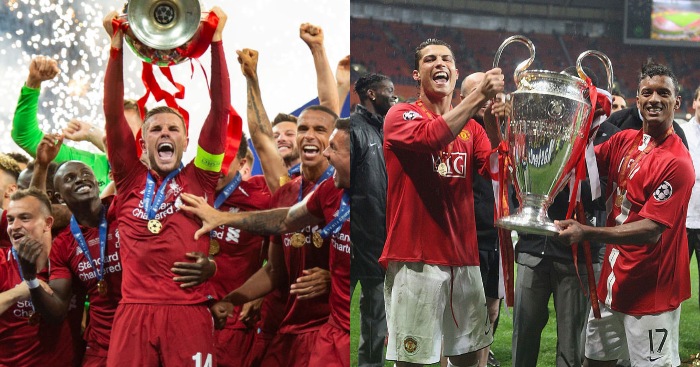 How do you win football?
Watching Jamie and Gary’s very well thought out run through of the greatest English teams of all time was very enjoyable last night. In an era where shouting your opinion into someone’s face online constitutes debate it was great to see a well thought out, rational approach top age old arguments which yielded excellent results that tallied with alot of the thoughts that I would have personally about the relative merits of different teams over the years. Perhaps a different metric to the one they applied (success over a three year period with marking for different competitions based on their respective merits) could be applied but to me it seemed fair, reasoned and reflective. In a nutshell for those not watching on Sky: champions league/european cup win = 5 points, league win = 4 points, other major european cup win = 3 points, FA cup win = 2 points. league cup/other relevant competitions = 1 point.

Last night i dreamed idly about what would it take to win football, to surpass those great United and Liverpool years and once and for all end the GOAT debate.

This would win football for me.

Like the time I won the European cup final in sensible soccer with Derry city vs madrid 9-0. It was time to stop playing, open the curtains and enjoy what was left of the summer.
Dave LFC

Spirit of the game
In defense of those who say the Offside VAR decisions are against the spirit of the game, to which they are told they need accept that VAR gets these correct is not the point they are making.  Its not VAR that’s the problem here, it’s the rule (should be daylight, as this is clear advantage, in my opinion).

However, the margins highlighted by VAR and the inconsistency with which they are applied is the frustrating thing.  If they are a mm offside, VAR picks this up and its offside as per the rules – well done VAR.

But what all other events in a game? The player does not throw in where the ball went out to the exact mm, free kicks are not taken to the exact mm, balls crossing the touchline are left to the eyes of the assistant referee. Nothing else in the game, apart from ball crossing the line, is measured to the mm. Millimetre measurements are not used in the game except now to give VAR a purpose, but these millimetres as per VAR are critical to gaining advantages?

As an example for rules not being applied/ignored, a few weeks back, Liverpool were awarded a throw in. From the throw in, Mane scored.  Through video replay, the throw in should not have been given to Liverpool. The resulting goal therefore would not have happened if the initial phase of the game was called correctly.  Integrity of the rules only goes so far it would seem. Another example.  Lo Celso reviewed and nothing. Maguire reviewed and nothing. Aubameyang reviewed and sent off. .

I understand my examples are not offside examples, but I will say this. If Pukkis 40m run & goal vs Tottenham only happened because 1 part of his body was a cm closer to goal than the defender (while the remaining 95% of his body was level with the defender) was the key point to him scoring then I will accept that VAR needed to intervene. Otherwise, to me and others, this was against the spirit of the game, albeit applying the technicality of the (bad) rules.

What I am saying is, after waffling (apologies), VAR does not get decisions correct and improve the game. VAR gets some decisions it has decided to look into technically correct to a bad rule, while ignoring all other decisions on events in a game – which events all lead to the event they are reviewing (e.g. Mane goal). Talk about a hypocritical chicken and egg situation.

If VAR has done anything, its highlighted the need for some rule reviews to help refereeing standards.
Michael, Dublin (….football played everywhere without mm video analysis, I guess they are not proper football matches…)

I’m probably missing something here but two very obvious solutions to the fuss around VAR could be:

Same as tennis/cricket, captain get 3 appeals per match to go to VAR for major decisions such as penalties and goals and red cards. Get the appeal right you keep your 3 appeals. Get it wrong, down to 2. Gives the role of captain some importance, relieves some pressure from the referee and means your own team basically has no excuse for any ‘questionable’ decisions.

Just remove the lines for offside decisions. Nobody wants a degree in geometry to decide if someone is half an inch offside. If you can’t see it with a slow motion reply with your own eyes then its not ‘clear and obvious’. Yes there will still be the odd human error but we can excuse them missing an inch offside.

For the record VAR is very much needed but for the clear and obvious not millimeters that infuriate everyone.
Ant

Eric Bailly
I’m reading a lot of pieces about Ole “freezing” out Bailly after his commanding display. Is the news week that boring?

Man’s kneecap was fortunate not to snap horizontally when he got injured in the earlier Chelsea game and yes even after all this time out, i’m 100% sure that Ole and United have been learning the Rashford lesson and are just making sure our smooth operator is back to full health before the end of the season run in.

Why can’t there be some semblance of rationality and logic in news nowadays.
N.V.M. (Wish we had 10 more saucy Baillys)

I now see you have already made fun of the media manufactured Bailly situation.

Corner ball placement…
I have a couple of theories to answer Ian (CFC) Hugo’s question about placement of the ball at corners.

The first is that by having the ball overhand the outside of the quadrant, the ball is further from the corner flag allowing more room for the taker to swing their leg freely without clipping the flag. Secondly, I wonder whether it also means that he taker’s standing foot is more likely to be on grass, rather than the quadrant itself. It’s a long time since I played and doubtless the pitch markings are is made from something far more professional at Premier League level, but I remember the white lines being more treacherous than grass.
Jonny (anyone else count Alisson hold the ball for 16 seconds towards the end of second half injury time last night?) Dance

Ian (CFC) Hugo, as someone who used to take corners, I can tell you that you place the ball at the outer edge of the quadrant, and often just outside, firstly to get it off the dip in the ground marked by the white line and secondly, you want it far away from the flag because kicking that would not be good.
Jon, Cape Town

In response to Ian (CFC) Hugo, while you might be right that the possibilities seem infinite/random, a dead ball situation is when a player has most control over these possibilities. They are trying to repeat (as close to) the same procedure as they possibly can, keeping all variables that they can control the same and optimal to what they are trying to achieve. This is similar to serving routines in Tennis, and there will be examples in all other sports. Even if you don’t think that the exact position of the ball makes a difference to the outcome, players find it reassuring to carry out the same rituals in such situations, which should help them to relax and be more consistent.
OCD (happen to be my initials)