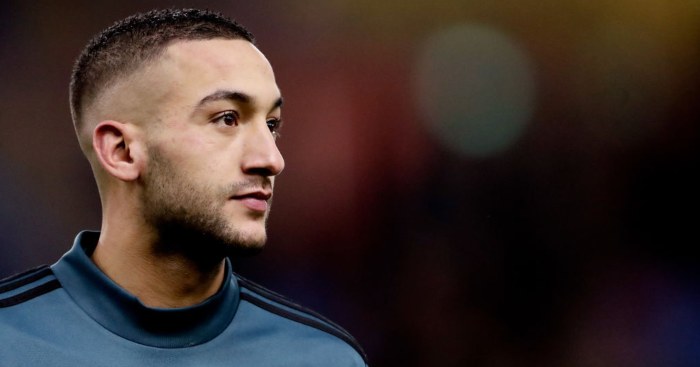 If you have anything to add, you know what to do – mail theeditor@football365.com

Ziyech OMG hot days ahead
Well Chelsea fans can now breathe a sigh of relief and look forward to the magic of next season, Hakim Ziyech is officially confirmed and for a fee of £33.3m that is quite something, I know many will state the Dutch league isn’t as strong as other leagues and that players either flop or do well when they leave said league, however Ziyech is a top player, for the past 5 seasons his goal contribution stats speak volumes, consistently hitting double figures, this is the type of catalyst player Chelsea need so desperately in the side.

Hakim Ziyech was incredible last season in Ajax’s Champions League campaign and I am confident he will bring that ability to the Premier League and for a fee of £33.3m, it is a bargain, very rarely do you see such a low fee for such a top talent and a proven Champions League level talent at that, I suppose this move alone makes up for the lack of signings in January, it also came totally out of the blue, no one had this move on their radar till it was 95% completed, feels like we are back in the old days where a transfer happened without gossip columns talking about it for months on end.
Mikey, CFC

Sceptical about Man Utd’s summer plans
DL, LFC, not that I’m saying I agree that he is actually worth £150m but I think the general thinking behind this value is:

So, from a business perspective at least, I think it’s a fairly understandable position to take. United have an asset that other teams want and holding out for the absolute most we can get is a reasonable gamble to take, for the time being at least. For years and years United have been metaphorically bent over by other clubs when negotiating transfers, so I for one agree with the notion of valuing him at the top end of the scale to maximise the fee we will receive. In reality, I imagine he’ll end up moving for a fee closer to £120m/£130m but one has to price him more than that amount because buyers will always try and get the price lowered during negotiations (unless you’re Ed Woodward trying to buy Fellaini).

Ultimately, any player is only worth what the buying club is willing to pay for them. If Real Madrid or Juventus really want him that badly then I imagine they will have a price in mind, above which they will be unwilling to pay. It might backfire and mean that we end up selling him at a loss or even losing him on a free but I don’t think that even Woodward is that inept.

As for the comments by Paul, Man Utd, I don’t see what of the points about sports psychology have to do with United’s inability to plan for the long term. They hired Moyes on the urging of Ferguson, arguably the only appointee that Woodward gets a pass on, but after that every single manager brought in has been down to short termism. Van Gaal was purportedly after a shorter contract than the one he eventually signed, with a view to grooming his own successor (Giggs) over a couple of seasons – his successor was neither in the frame nor ready for the job when van Gaal was fired. Nobody hires Mourinho for the long term project – anyone with access to Google can see that he’s a manager for the short term. And Solskjaer was hired almost purely because of his short-term (relative) success. Out of the four of them, only Solskjaer has really produced the sort of long term sustainable plan that Woodward and the board are buying into but even now there are growing suggestions that he won’t be around long enough to see them to fruition.

Furthermore, that last Ferguson 11 is not a good indicator of that squad as a whole. That squad also contained: Rafael, Evra, Ferdinand, Vidic, Nani and Rooney, who were all still good enough to play for us at least another season or two. The fact that Evans is still playing, and for a team currently miles ahead of us in the league says his name should also be added to Paul’s list. The difference in quality between then and now is in the person who was signing them – Ferguson essentially was our DoF and he knew exactly which players fit into his vision. Since he’s been in charge, Woodward has a poor track record of: bringing in managers who have a long-term plan, which they will be present for the duration of; identifying players that will significantly contribute to said plan (seeing as he is our de facto DoF); actually completing the signing of players we want in a timely fashion; and negotiating good deals for the players we do manage to sign (when was the last time we signed anyone even resembling a bargain?). That’s why I am sceptical about our summer plans – not because I’m in need of cheering up but because I have looked at our recent history and it does not suggest that things are going to change any time soon.
Ted, Manchester

Gatecrashers aren’t guaranteed to last
I’m sorry but from where I sit there is no guarantee anyone in the top 10 is likely to maintain there place last year, The so called DNA squad this year and Spurs are having to rebuild due to the lack of foresight and planning laid down by previous regimes  most of which involve so called managers with “pedigree” one of whom you keep telling us, should be rewarded with the Man U job ,Most of these teams squads are not as organised as they should be and the only reason they have such expectations is the colour of their shirts. next year may actually be the right moment to measure them .Expect at least one of these teams Boards, to chicken out of their projects and go acquire a more experienced manager ,who will take credit for the building blocks the DNA squad were able to set up.

Brendan Rodgers seems to have once again, (did the same at  Liverpool and Celtic )   jumped on a crest of a wave  at the right time and is riding the perfect storm to 3rd place.The question remains will he be able to juggle  increased expectations and a European place next year.Wilder is having a great year and also deserves plaudits but will his tactics still catch everyone out next season.

Ancelotti has done well so far ,question remains will he get be able to maintain momentum till next season and will he acquire the right tools needed to finish the job and maintain a place at the top of the table.

Nuno has worked wonders this year he is however out of both domestic cups and isn’t tearing up the league like he was a few weeks  ago.

Even the top 2 are not above slipping a bit next year, WIll Liverpool still have the drive will Pep still be around if he is will his rebuild work.

As it is every position is up for grabs. Only a fool with a narrative would assume to know who is going to make the top six next year.
Roode, MUFC

Gambling culture in football and FIFA
Over the last few years reading Diamond Geezers and other FM related nostalgia, I couldn’t help but wonder when F365 would open itself up to the Pandora’s box that is the FIFA football video game.

For context, I am 31 years old and have played FIFA since 1999 and had many hours of joy, meaningless achievement and highly unnecessary frustration. This year for the first time I am trying out the FUT ultimate team mode and I thoroughly enjoy it. I have a very good team, I have not spent a cent of real money and am not even mildly tempted to do so. It is really very possible.

This is why I am slightly alarmed by the faux outrage and calls for authorities to step in to allow you to exercise some very basic self discipline. Especially considering the very real all consuming cancer that is the betting culture of “real” football.

As a South African, up until a few years ago all promotion and advertising related to betting or gambling was almost entirely outlawed but now our broadcasts and pre-game/half-time adverts are unfortunately all betting related.

When I spent a few years abroad I remember being completely flabbergasted by the way in which my British friends would turn everything related to any game we were watching into some kind of betting game. I couldn’t understand it until I saw the ridiculous overload of betting ads all catered towards lad culture that permeated all sports broadcasts and websites (Sky being amongst the most shameless). This kind of advertising leads one to believe that if they have some kind of superior insight into the game they are special and will be able to beat the system and make enough money to retire while downing a few pints down the pub with the lads. This is despicable. And the reward offered is tempting to any working class individual and that is very dangerous.

Personally I can see a clear distinction between real money and fake in game rewards. Children should not have access to the means to spend real money on such things (this is a parenting issue) and adults should not be tempted by it. That is ridiculous. Seems simple enough to me but I am open to other opinions.
Lawrence (Boomslang FC) SA

Nicolas ‘One trophy in a decade after departure’ Anelka probably a better researched reference. Again, that was a pretty decent trophy.
Arwyn Thomas

Following on from the article about the stars who missed out on their club’s biggest success reminded me of Paolo Maldini. Now obviously he won everything for AC Milan, but his record for Italy is so painful to read:

He retires from International football and then Italy go and win the next World Cup on penalties without him! Any more of a cruel example than that?
Don L. Renegade

Wise old owl needed
Hoping a wise old owl of the mailbox (or Ed) will know when the tv fixtures are confirmed for the last batch of prem games?

Before anyone gets to highstrung about anything F365 say, just remember its an opinion based website.

I remember when they said they would rather have a beer with Pep Guardiola than with Jurgen Klopp…..