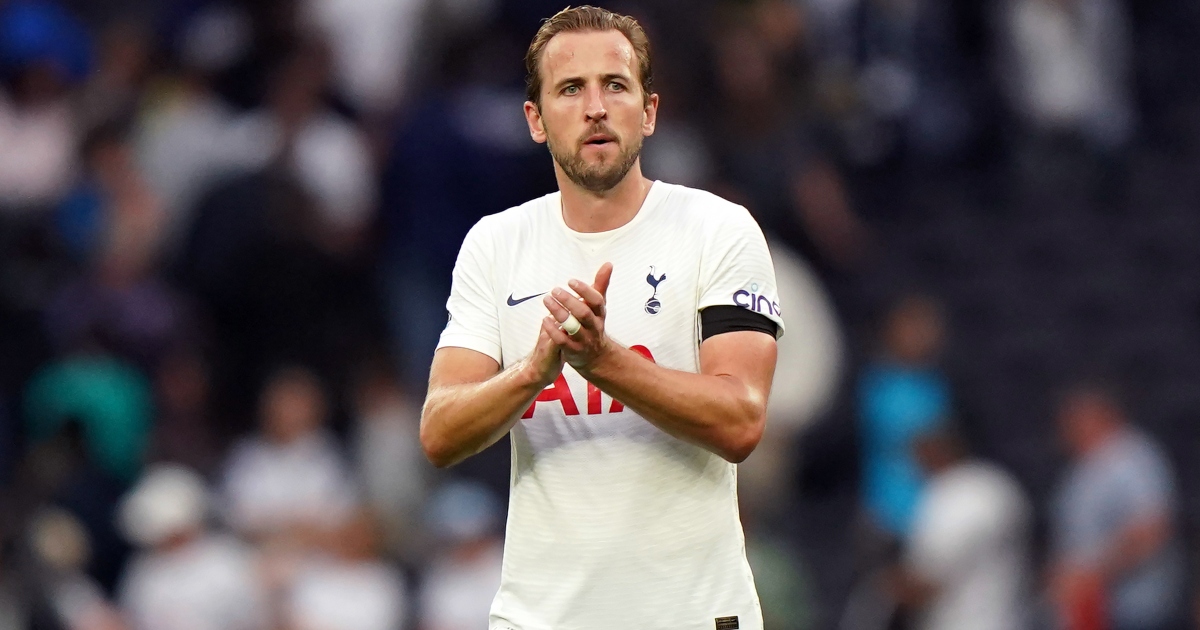 Get your mails on any subject in to theeditor@football365.com…

Did Levy really win?
During the summer I couldn’t understand Pep’s reasoning at all. Manchester City didn’t have a striker, City *needed* a striker – oh, look here’s England’s number one striker agitating for a move! The top assist maker and the top goal scorer of last season wanting to move to a team that seemed to really need him. It seemed as square peg and square hole a situation as you’ll ever run into .

But Pep spent £100 million on Grealish, who he didn’t really appear to need at all then pleaded poverty when it came to bidding for Harry Kane. We’ll never know what would have budged Levy into selling but you’d have to think £150 million would have at least brought him to the table.

And yet it never happened. Kane stayed put, his brother looked an absolute idiot, Levy won – or so it appeared – and City didn’t get their man. Altogether a strange business.

But was it? Look at Kane this season, so far, and he’s looked very ordinary. Slow, cumbersome and off the pace, he doesn’t look worth anything like a British transfer record.

This is easily explained of course though. Unmotivated by playing for Spurs he’s temporarily lost his edge. Having missed out on his dream move he can’t get excited by turning out for a team that’s going to win nothing this season, next season, take your pick really. Once he’s truly accepted the situation he’ll be the usual Harry Kane.

But look at him in the Euros though. Sure, eventually he scored a bunch of goals but he was beyond ordinary in the groups. Slow, cumbersome, off the pace….wait we’ve been here before. England were badly hampered by him early on in the tournament. Fast paced, incisive play ground to a halt anytime the ball got anywhere near him. Sure he’ll put the ball in the net when it matters – and that’s not a skill to be underrated- but his overall play is like watching someone covered in treacle putting on lead boots. Painful at times.

And maybe that’s the Harry Kane Pep saw. Someone who’d slow up City’s attacks rather than enhance them. With maybe 2 seasons left before his legs completely go. Who simply doesn’t have it in him to play a high energy, high press, fast attacking game. Someone, in short, not worth whatever sum between £150-£200 million it would have taken to get Levy to sell. Which is why City never really made a serious offer.

So contrary to how it was reported at the time, perhaps Levy didn’t win. Kane will never be worth as much again as he was this summer. He’s unmotivated and stuck in a lengthy contract he was a fool to sign. City won’t be back for him next year. So you’re left with a rapidly depreciating asset who doesn’t want to be there and plays like it too. Maybe this was the time to negotiate to sell and mean it rather than continually plant stories about how amazingly tough your negotiating skills are in the media.

Kane lost too and he lost big. His career now has a very real danger of finishing trophy free. A cautionary tale of hiring your halfwit brother as an agent rather than someone actually good at the job.

And Pep? He’ll just carry on winning things like normal. Because he’s pretty good at this football park.
James, Liverpool

Lucky United?
Looking at the mailbox comments after the United-West Ham match, I was left wondering whether we all watched the same match. Granted, United have an obvious weakness in defensive midfield, but to say United were lucky to win is blatantly unfair. We had 2 clear penalties dismissed, Ronaldo had 2 great chances which he should have scored from, Bruno hit an incredible shot which hit the goal post. Luck was probably the only thing that eluded them this weekend.

Let’s all remember that Varane, Ronaldo and Sancho have just come in with hardly any training time together under their belt. It takes a little time for players to build a cohesive unit together when there is a change of personnel but the early results have been quite promising.

Let’s talk about Ronaldo though. At 36, he is still THE complete player. He brings a whole new dimension to United. Always in the right space, always present to take on any opportunities to head the ball, drawing away defenders, and when he takes off, he can outrun almost anyone. In the match against Newcastle, Ronaldo recorded a speed of 34.20 km/h for his second goal (second only to Bissaka in the game). How incredible is that?

On the evidence so far, there is no doubt that Ronaldo, even at age 36, remains one of the best football players on the planet.

But Ronaldo also brings a lot more to the table. The money he’s helping rake in from T-shirt sales alone has more than already paid his transfer fee. But most importantly, he brings leadership which has been lacking in the United team for quite some time. He’s someone they all look up to and respect and being called out for slacking by the great Ronaldo (which many United players have been guilty of in the past) is the last thing any of them would want. There are already reports of other players following an improved diet in his footsteps and we should expect to see increased standards all around.

That, in a window when United signed Sancho and Varane, Ronaldo still is the most exciting signing and the one who is making the biggest impact, just goes to show how much more he still has left to give to the game. I really don’t care whether Messi or Ronaldo is the GOAT, I have giddily jumped on board this Ronaldo train from Manchester.
Adeel

Not in Ole’s plan
Sa’ad made some *interesting* points in reply and while Brexit has given me many valuable lessons in the futility of debating with people who won’t see the evidence of their own eyes, I’ll bite.

McTominay, who I said had a poor game with the excuse of coming back from injury had no part in the build up to the equalising goal. He wasn’t on the pitch for the second goal so really not sure what “amazing pass” you mean. To be honest, that pretty much undermines your argument for him but I’ll continue and suggest that even if McTominay improved his forward passing to infamous goal assist machine Matic (!?!) like levels, probably the first name on the team sheet would be Fernandes or Ronaldo.

Because goals win you games. That’s why people bang on about assists (and goals). So frankly, I don’t really give a flying flamingo what Ole said about Pogba’s assists (which you seem to have taken out of context anyway – the broader point being it’s a team game), because the fact is Pogba and Fernandes are there to create chances for players like Ronaldo and Greenwood to score.

The stats bear this out, with Pogba both having more assists and averaging more key passes per game than Lingard. And despite Lingard being more likely to score (he’s played as an attacker after all), Pogba still has scored more career goals. So yeah, I do think it an odd choice that Pogba would be the one to make room for Lingard when Fred and McTominay remained on the field while having poor games. Maybe I should remind you that at this point in the game the scoreline was still 1-1 and Man Utd needed a goal to win the game? If we were Moneyballing, we’d be trying to field our players with the highest likelihood of creating chances at that point, not take them off.

It’s at this point you mention Matic for his “fantastic line breaking passes”. I don’t think we’ve been watching the same Matic over the last few years. I think most of us have been watching a good player get older and more and more off the pace, plodding around the pitch with the turning circle of an oil tanker, passing ever more sideways and backwards. Obviously you’re in a universe where McTominay was involved in the equaliser.

Clearly on Sunday, the substitutions came off for Ole. But I don’t think many people would have had money on a Lingard goal from a Matic assist, and that’s the point. It doesn’t seem like a deliberate plan, it seems like a fluke, like Ole’s players have once again bailed him out.
Daniel, Cambridge

Messi, Ronaldo and Man Utd
Just a few thoughts as Messi continues to post an impressive string of clean sheets in Ligue Un.

1) There are players that are at their best when all the circumstances are tailored to them and this is not a stick to beat anyone with and Messi will come good.
Even CR7 went 4 matches without a goal when he first went to Juve
2) Saul Niguez isn’t a bad player and Tuchel never got any stick despite Chelsea being outplayed by Villa throughout and scoring on the counter.
3) Which brings me to my main point with all of this, Man Utd after their first league game were rightly praised on this site for playing very good fluid football with Ole beginning to show those patterns F365 covets so much with the expectation of the new signings yet to feature at that time meaning they were in with a shout for the title. Then United started integrating the new signings against Southampton and the fluidity went. CR7 then came in and despite no fluidity the team was carried forward by individual talent against Wolves, Newcastle and West Ham(our fluidity did suck here tbh).

1. The fact that individual players are willing and able to stand up and be counted consistently is not a stick to beat the manager with as he has most definitely facilitated and fostered the circumstances and atmosphere for those player to be able to express themselves consistently).For any doubt see United under LvG and Mourinho were good players looked like bad players.(EPL,2014 – 2018)

2. The fact that a manager can trigger and sustain long unbeaten winning streaks of entertaining football without rocking the boat with ego based decisions or damaging moral with an impressive instinct for self preservation that demands a sacrifice in the media every week is genuinely the only talent Ole needs, the rest we are willing for him to learn as he goes.

3. I know there is a section of our own support that dislike Ole to the extent that they hope we lose, to you I say you are not really part of us anyway and PS:-Conte is just like Mourinho…..really!

4. The team will gel and play much better but for that to make any difference at that stage we need to win anyway we can and stay with the leaders right now.
Symba (I fully expected Atkinson to pull out his phone from his back pocket to check on the bribe he had worked so hard for)

Ward warning
Panorama confirmed for those who were still in doubt about Aidy Ward.

I feel sorry for the youngsters who got led up the garden path by him, presumably for his own gain. I vaguely recall some young lad after Sterling forced a move under his guidance and I have a feeling that kid disappeared into obscurity because I can’t recall him name now.
Minty, LFC

Fictional fans
I was a bit behind on my Ted Lasso, so watched a bunch last night to catch up – you know, to celebrate their Emmy awards.

However, it was totally unrealistic.

Now we all know that City fans don’t fill a stadium!

Was going to apologize for the spoiler but, well, that wasn’t.
Paul McDevitt