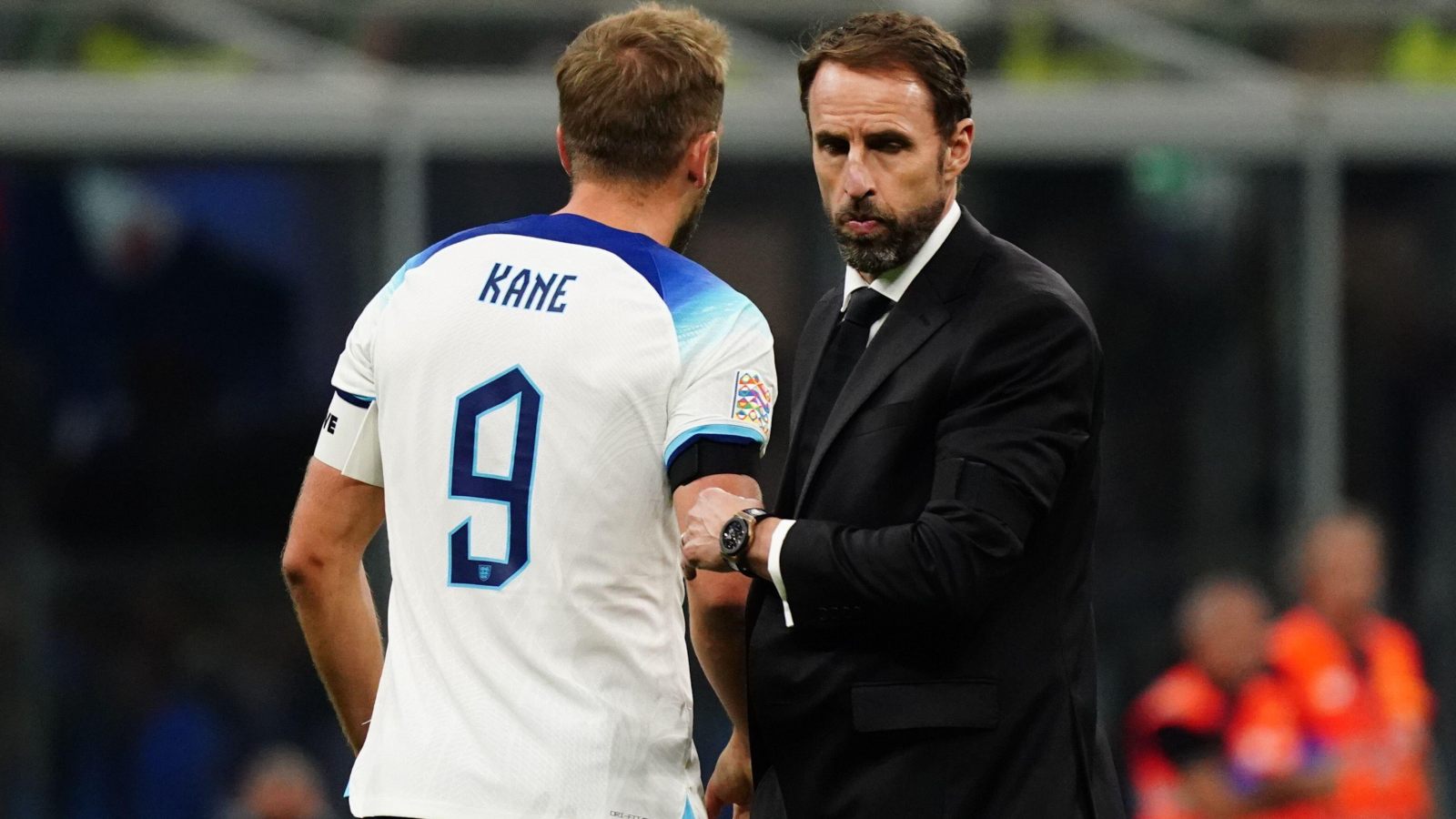 The Mailbox didn’t spot the positives Gareth Southgate saw in the Nations League defeat to Italy. This manager can’t get the best out of this England squad.

Rice’s logic
My favourite thing about the England game so far is Declan Rice saying that England will come good because he sees his team mates banging in goals in training.

Declan, they’re banging in goals against their fellow English players, that doesn’t seem like a particularly impressive feat now does it.
Will cfc

Southgate’s not the one
What in the ***k was that?! I’m starting to get exceptionally concerned with our ability to get out of the group in Qatar.

I’m berating Southgate exclusively here. Not a single team in the premier league would look at him as a candidate for manager out with relegation-fodder Forrest or Bournemouth. Meek changes when looking for a goal against a team who has had our number consistently over the past 2 years shows that he isn’t learning and is tactically inept. Shaw is out of favour at Man U, is renowned for not staying ‘professional athlete fit’ when he isn’t playing regularly and yet Southgate deems him to be fit enough to change the direction of a competitive international match.

As a nation we need a little more of the Chelsea attitude towards bad performances, ruthlessness at the FA is frustratingly lacking.

Of the Italy team that played against us tonight I would suggest that outside of Donnarumma (yes, I did have to google the spelling) no one else would make it into our starting 11 and yet they kept us at arm’s length for an entire evening. Say what you will but I would absolutely rather go to the World Cup with Tuchel et al in charge, throw bags of cash at it, in the hope that someone would have the ability to change a games direction or at least nullify a nations strengths than the absolute Yes Man that is Southgate. Minging! Yes he’s coincidentally been in charge for a couple of good tourney runs but my God, he won’t win us the World Cup. He’s been annoyingly fortunate up to this point and he’s now being found out in a particularly bright spotlight.

Southgate out if we want it to ever come home again.
Ibby – Geordie waiting for all the yellow card fines I’ve paid to the FA to finally get us Zidane

…England were boring, terrible and totally devoid of ideas against Italy. A cure for insomnia. The same old tactics, players and ideas which have admittedly worked in two tournaments but have been made to look rubbish in the last five nations league games and don’t look fixable in one game.

The question is, what do the FA do?

1. Keep Southgate. He’s done well in tournaments, seems to be popular and is a good manager who has united the various rival camps. He’s given chances to players but is sensible and defensive minded (which is good or bad depending on your take).

2. Appoint someone else. Who else is out there? I would have said Graham Potter but he’s gone to Chelsea. There’s a few good managers available on the market who would be an upgrade tactically but for various reasons wouldn’t likely want the job, wouldn’t be suitable or would risk breaking the harmony that has been created. The best candidates are not English which wouldn’t fly.

Overall, Southgate has earned the time but the FA must surely be looking past the world cup to get a successor, especially if we don’t do well (which looks likely on recent form).

The problem is that Southgate won’t change his ways now and I think we have peaked by reaching a final (admittedly better than most nations and the best men’s result since 1966).

We will still see the same drab football and predictable selection which stifles Foden and Grealish, plays two holding midfielders regardless of the opposition and picks poor defensive players who better managers don’t select for their clubs (Maguire, Shaw). It’s too late for TAA and Madison to get a chance I feel and some decent players who offer something different (Jack Harrison springs to mind given his start to the season) will always be miles away.

So in summary I want England to do well but don’t think Southgate can take us further. Let’s have Bielsa and play a 4-1-4-1 formation with five attackers, tactical flexibility, lots of fun and lots and goals at either end. Wouldn’t be dull and you could all experience the thrill ride we had at Leeds.
Tom

…England continue to show zero attacking fluidity under Southgate. What a waste of a talented squad. Don’t give me this International football is a slower tactical game bullshit. Its slow because England can string two or three passes together In a forward direction.

Any success England recently is despite of Southgate rather than because of him.
Hats (Gibraltar)

It wasn’t all bad
Well, that was completely as expected, wasn’t it?

Not all bad though. James was more than decent, Bellingham looked hungry (and the long term partner for Rice), Foden lively (as was Grealish when he finally came on). I like Pope at least as back up. Dier wasn’t too bad either.

But little to no threat against a well marshalled defence. Who would have thought when you play for a draw.

I won’t give Saka too much grief, because he was out of position, but he did and offered little as usual.

Maguire didn’t do anything particularly bad for a change but nor particularly good. A standard nothing performance with lots of sideways and backward passes. I’m sure he and Gareth will view that as a success and vindication somehow.

So, now 5 games without a goal from open play. Shame the manager lacks the balls to really attack, expecting one slow striker to find space against three classy Italian defenders. Partner him with Toney instead of the toothless Sterling, maybe things are different? Well, we didn’t get the chance to see the most on form England striker as he wasn’t even selected for the match.

This world cup is going to be cracking eh?
Badwolf

Too much information
I tried watching the England-Italy match but had to stop and watch The American Friend instead. The tame display was a conservatively pragmatic approach to the game which got me thinking about the future of football, again. As most will have noticed, many players wear sports bibs containing microsensors which collect data on the players’ biological functions, movement and speed, like a fitbit but better. As a cycling fan and cyclist, I am aware of many devices like whoop and others which are supposed to monitor training strain, recovery and sleep quality. Large amounts of data is regularly analysed to judge fitness and performance and how much rest is needed. There are many sensors on cyclists and bicycles in the Tour de France for example, allowing people to see speed, position, heart rate, vo2, altitude, power output etc. Now, cycling has a much smaller budget than football.
The sensors in the bibs worn by footballers capture incredibly detailed information, during training, matches and internationals and companies like statsports provide platforms for monitoring and analysing that data with real time feeds of speed, pace, distance, positioning, heart rate and countless other metrics. This is all old news and probably uninteresting but what might be interesting is how the data is processed and reacted to by the data analysts, medical departments, managers and novel private enterprises.
Forgive me for sounding like someone annoyed with new features in football manager but overworked players who are tired from too many games will result in more energy conserving and pragmatic football. It will also likely result in performance strategies run through AI algorithms which predict the optimal lineup of players, tactics, substitutions and potential episodes of personality flaws such as straight red cards or the full Joey Barton. As there will be no independent football regulator anytime soon, such data collection and analysis will be suffer similar faults to VAR while also allowing things like betting companies to capitalise on new variables and will doubtless go hand in hand with some cryptobro partnerships with shady startups run by people who do not exist who want to make a quick buck before going on the run to Qatar.

Kindest regards (I would have written this better but am tired),
Reub

Do of that what you will. And this is not a complete slight on Liverpool. They will genuinely be the team that did the most but won literally the least for all the talent they had. Are Liverpool fans happy? Genuine question, all banter aside. I feel the Klopp era has had a huge euphoric high but mostly filled with excellent play while not winning much.

A title and CL are massive trophies, but to win just 1 of each, while managing to choke atleast 4 finals and the league, were Liverpool both a great team and a disappointment?