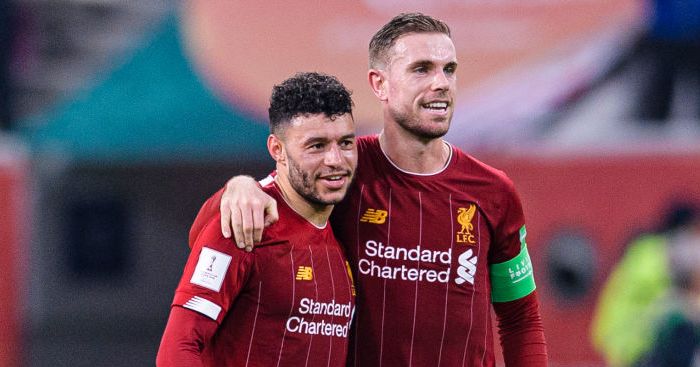 Send your thoughts about how much you love Jordan Henderson to theeditor@football365.com…

But this Liverpool team.

Christ on a f**king bike this team is outstanding.

I know, the mailbox is full of us fans ‘crowing’ every week. Only we’re not crowing. This isn’t a ‘my dad’s bigger than your dad’ thing, from any of us. This is just a ‘holy sh!t can you believe how good this team is?’ It’s just so much fun to watch this team play and we revel in the fact that we get to watch them (almost) twice a week.

Best goal of the day was disallowed. The passing and movement from keeper to Mo slotting it in was orgasmic. I doubt it’ll get shown on MOTD so unsure how anyone who didn’t watch it live will be able to agree/disagree. Trust me.
James Outram, Wirral

P.S. the commentary on my stream (NBC) kept calling him BertrAND

More Liverpool ridiculousness
There are the obvious subjects that will get mentioned in the mails about the game today, so I thought I’d try to ignore them in order to add something different.

I was astonished, considering how well Southampton played, that their xG was only 0.72. And that’s despite them having 17 shots! Couple of reasons I can think of for that figure:

1) Southampton had the game plan of shooting the moment they got the chance to roll the dice, so to speak. This I find unlikely because of actually having watched the game and not got that impression.

2) Liverpool’s defenders, even if they weren’t necessarily having the best of days, still managed to force Southampton into areas where their chances had little chance of going in.

Don’t know if anyone else has an idea as to why this might be. I usually take xG with a pinch of salt, because it demonstrably has a lot of flaws, but for it to be so low despite so many attempts, and Southampton clearly playing well to the naked eye struck me as being noteworthy.
Greg, Taunton

P.S. I can only assume the ref thought that no sane defender would nutmeg an opposition player when trying to pass to the goalie. Was sure that would have been given as a back pass.

Henderson is finally the new Gerrard
Henderson putting in another MOTM performance today, this time with a goal and an assist, and pretty much covering every blade of grass, making short and long passes, tackles, interceptions. Seems to be becoming a recurring theme. The shouts for him as Player of the Season are becoming less questionable with each passing game.

Watching Henderson, he certainly reminds me in many ways of Steven Gerrard. It seems that he has picked up many of Gerrard’s best traits as a captain. He is different to Gerrard in the sense that he is much more vocal, while Gerrard was the strong and silent type. However, he has embraced that role of all action, maverick midfielder who is just as comfortable in his own box defending as he is making late runs into the opposition box. He has also learnt to carry himself with presence and authority to reflect the position of immense responsibility he holds.

At the same time, Henderson has also learnt brilliantly off of Klopp and the coaching staff, the art of managing games. It is clear that Henderson is Klopp’s avatar on the pitch. He is the one keeping players in position and demanding work rate from everyone on the pitch, even the front 3. He seems perfectly in sync with the way that Klopp wants to manage games towards the latter parts when Liverpool have the lead. It is clear that Henderson prioritizes the 3 points above all else, just like his manager, and will not take any risks to jeopardize that.
johnnyWicky, Toronto (Mo Salah sniffing out a 3rd consecutive golden boot)

*The* Klopp player
I’m writing to tell you of the player who, for me, epitomises Klopp as the man and manager he clearly is. Not Salah, Mane, Firminho, Henderson or even Trent (although all the players could be included) I’m talking about Oxlade-Chamberlain.

Here is a player who, not so long ago, was languishing and lost under Wenger at Arsenal but who is now reborn under Jurgen. Everyone knew that there was something there when he was in north London, waiting to be unleashed and since the move, like a rough diamond, he has been honed and polished to become the confident, powerful, energetic player we see today. That speaks volumes, not just about the training and nurturing that he receives at the club, but of the ability of Klopp and his staff to look around the league and see the untapped talent of certain players, bring them to Merseyside and get the best out of them.

That to me is the mark of an exceptional manager.
Gafyn (already ‘cautiously’ planning a massive celebratory drinking session) Jones
Cardiff

Provided Liverpool win the league (inevitable at this point surely) When is the last time a team won the premier league with this many Englishmen part of the first team? To qualify means any player who made a premier league appearance either as a starter or off the bench. It certainly wasn’t any of the city teams. It certainly wasn’t the Conte Chelsea team. Maybe the Ranieri Leicester team? I’m not sure, but would be interested to know the last premier league winners with same amount or more Englishmen part of the first team.
johnnyWicky, Toronto

Ref’s sake
As a Liverpool fan I’m going to say yes it’s nice to have won the game and maintain our drive in the league but my word can we have a talk about the officials and how poor they were overall. It’s games like this that give VAR a bad reputation.

Starting with the clear backpass that was somehow missed, I’ve not seen one that blatant before just get ignored and it will feed into the idea that the FA are just gifting this to Liverpool. Im going to ignore the firmino ‘foul’ as though yes I feel long lent on him, he wouldn’t have got to the ball anyway so nothing lost really.

The Ings foul though isn’t as black and white. From some angles it looks like there’s no or little contact and he’s lost control of the ball, in others it seems like he was clipped. This is where VAR falls down. I don’t remember anything being mentioned about a check or if it was checked why wasn’t there an announcement? It just adds to a feeling of injustice when Liverpool just go right up the other end and score the opener.

Overall I’d say Liverpool did deserve to win but I can help but feel that Ings one would feel unfair if it’s had been against Liverpool (though I feel the whataboutism argument regarding firmino will rage on and I may be in the minority in believing it wasn’t a foul).

I rather love he’s not “stepping oop” but schadenfreude …

Martial poor
To all the United fans complaining and the other fans laughing at the singing of Odion Ighalo. After watching Martial ‘Try’ for 6 months, I would have been delighted with Connor Wickham on loan.
Kieran (Scotland, not Scottish)

Brave decision to drop Kepa also, not sure it worked out to well as Willy was at fault for the second Leicester goal, but I suppose a 2-2 draw isn’t the worst result.
Mikey, CFC

A good point for Chelsea in the end, but so many things are not working in the team at the moment. The general dysfunction makes it hard to single out a player for criticism but WTAF is up with Lampard and Mount? The only way Mount seems capable of creating chances is by pouncing on a slack pass or nonchalant defender. To compound matters, he has been playing poor passes and shots after his one move of late. Attacking moves always seem to break down immediately he is involved.

How then does Lampard drop and substitute underperformers and Mount starts and plays 90 minutes? In what world is he better than Kovacic? I hope RLC comes back and makes the decision for Lampard because his soft spot for Mount is turning into a gaping hole in Chelsea’s armor.
Lawrence, CFC, Abuja.

Chelsea’s twin thorns
1) Mason Mount, who shouldn’t start a single game if adjudged solely on the quality of his game.

2) Frank Lampard who starts him nevertheless and then tops it up by messing substitutions.

Chelsea’s game is far from unblemished but Lampard’s Mount – obsession and his quixotic substitutions have likely cost the club 3-5 points to date.

Wondering what is going on..
Radu Tomescu – Xindian, Taiwan

Blind Alli
After seeing all of this Grealish and Maddison hype recently and debating on who should be starting for England at the Euros, I cant help but feel people are not giving Dele the credit he deserves.

Dele is the same age as Grealish and Maddison but is already far more experienced. He has nearly 5 seasons of PL experience and has been pretty good in the Champions League for Spurs too. Despite being injured and out of form this season, he has the same amount of goals as Grealish and one more than Maddison. Hes also had a lot of experience with England playing in Euro 16 and WC 18. People also don’t give him the credit for his versatility. I think he’s decent as an 8 and a 10.

People are just bored of him now and want to hype someone else up. This is from an Arsenal fan too.
Dion