Home Mailbox Have England got time to replace Pickford before Euro 2020? 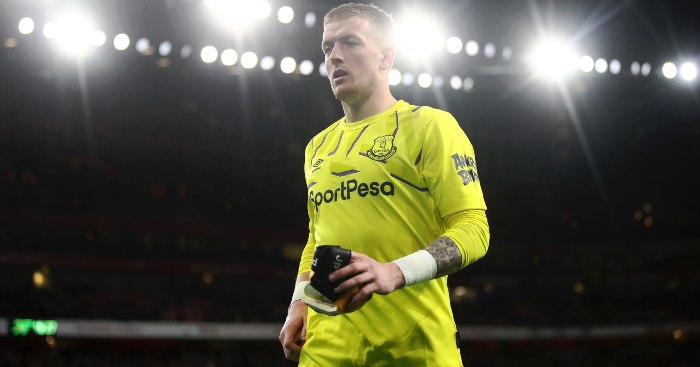 England’s Pickford problem
Jordan Pickford had yet another performance that makes you feel uneasy about him being England’s number one. With 4 months or so to go until the Euros this looks to be a bit of a problem. Southgate has a tough choice in either hoping his current number 1 can get in to some sort of form before the tournament or he has to possibly unsettle things in bringing in a new number 1. If he is going to do this, surely he needs to make this change as soon as possible, starting with the Italy game? Is 5 games enough to settle in a new keeper?

I’m not even an Everton fan and I get nervous watching him any time the ball goes near him.
Hugh, Kent

Mourinho moan
There’s been a fair few mails defending Mourinho in the mailbox this week after the abysmal performance against Leipzig but it’s the one from Ursolin Waxoh today that has pushed me to write in.

Firstly, cards on the table, I never wanted Mourinho at my club. Yes he may get you trophies in the short term, although that’s debatable these days, but at what cost? Not one worth paying in my book. However I support my club so I was willing to give him a chance. But saying he doesn’t deserve criticism because we have injuries to important players is a bit much.

Yes, any team missing attacking players of the quality of Kane and Son would suffer, but Eriksen had been out of form before being sold and clearly wanted to leave (plus we bought a very good looking replacement in lo Celso). And an out of from Alli? The same Alli who’s form everyone was praising mourinho for a couple of months ago? Who’s job is it again to get the players to their best form. We also have Bergwijn, who looks an exciting signing, lamela, who I’ve always thought is pretty underrated, plus some Brazilian guy who someone tells me scored a couple of goals in something called the ‘champions league’ last season. Add to them sessegnon and Troy parrott and we have 5 internationals and 2 exciting youngsters for 4 positions in the 4231 we usually play. Are we a bit short? Yes. But we still have an attack that most teams would be very happy with. However…..

Mourinho doesn’t seem to know how to use them. When he came in we started playing long ball football, using Kane as a target man. Not pretty, not what I’d choose to watch but I could see it working with his strength and eye for a pass when he has the ball, plus the pace of son and moura playing off him so let’s give it a go. Then Kane gets injured, out for the rest of the season, so the manager changes tactics to adapt to the players he now has available right? Not Mourinho apparently, we continue playing long balls up to our new target men the 5 ft 8 Moura and the 6ft but not particularly strong in the air Son. And we go 5 games without scoring at the start if the year. Go figure.

Then there’s the defensive tactics, particularly in big games. Again it’s not what I’d choose for us to do but if it works then fair enough. But. To play defensive mourinho style, a quality defensive midfielder is essential and we don’t have one. We have 1 truly defensive minded midfielder and that is Dier, who is very aptly named. But mourinho sticks with it anyway, leaving a defence low on confidence exposed by the lack of proper midfield cover. Then to make matters worse he chops and changes the defence so no one can get a run of form going and plays an exciting new prospects, tanganga, in his correct position once before shunting him between left back, right back and the bench after a promising debut at CB. How is he going to develop being used like that?

The best managers all have a preferred way to play, but they can also adapt their system to suit the players at their disposal. Mourinho doesn’t seem to be able/willing to adapt. He is sticking to the same old tactics regardless of the fact that the players he has don’t fit the tactics. Either he is sacrificing the remainder of our season to prove a point to the board like he did at United or he actually doesn’t know how to play any other way. I’m not sure which is worse tbh.

We’ve spent more in the last 2 transfer windows than in the previous 4 under Pocchetino (or in the whole of this century if you take player sales into the equation) and he took us to 3rd and the champions league final. Mourinho needs to stop moaning and throwing players under the bus and start finding a way to what he’s got pretty pronto or he’s going to lose the team and the fans.
Simon (THFC obviously), London

United are going in the right direction
Somewhere between articles on low blocks, opposing views on the managers ability (Ole in /Ole out), mails complaining about arrogance because the shiny new toy wasn’t risked in an away 1st leg ,when there are potentially over 25 games every Thursday/Sunday, till mid may and people projecting 2022 as our year, complete with our acquisitions/deadwood (how much will we owe liverpool fans for copyright infringement) I believe there is only one truth.

The position of this Utd team will be dictated by the quality available , Love or loathe the manager, his three windows have had a positive effect, the team ain’t perfect neither was this performance, but with Bruno you can honestly see a direction, now you get the feeling that with 2 or 3 more players up front like this the banter years may finally be over… Maybe not this season but soon.
The methodology currently in place needs to continue, forget about big names who have proven themselves, focus on hungry guys who want to win. Less prima-donnas waiting for the team to be built around them more people who want to be in the shirt.

The next sequence of premiership games oddly against 3 of the greatest managers of all time (Ancelotti, Pep and Jose) will shape this season but having gotten past the kind of opponent that has usually hampered us this year we have hope.
Roode, MUFC

Official incompetence
How many mistakes is it possible for the officials to make in one weekend. Because believe me what happened in the Premier League games on Saturday and Sunday had nothing to do with VAR it was quite simply incompetence by the men in black.

In a parallel universe:
De Bruyne conceded a penalty against Leicester
Lo Celso was sent off against Chelsea.
Josh King scored against Burnley.
Sheff Utd had a player sent off late in the game vs Brighton
Martial had a stunning goal disallowed for offside
Dale (give me a whistle, I could do better than that) Marlow

You are the ref
Riddle me this:

Sadio Mane makes an attempt at controlling the ball in the air with his foot. The ball is 5 or 6 feet in the air. As Ederson is trying to head the ball in the same space Mane’s foot catches Ederson in the face and the referee deems this to be a reckless challenge and issues a red card for Mane.

Now let’s look at Leicester vs Manchester City and Ihanecheo vs Ederson last night and swap Mane’s foot for Ederson’s fist. Why is this any different in terms of a reckless challenge?
James Outram, Wirral

Protecting keepers
…In response to Tom Parker on ‘why do keepers get so much leniency when they mistime a punch?’

I first had to explain this to a friend in around 2004…im aghast I’m still having to explain it on various forums (social media etc) but here we go….

A direct free kick is awarded if a player commits any of the following offences against an opponent in a manner considered by the referee to be careless, reckless or using excessive force.

The key word here is CARELESS

Not giving sufficient attention or thought to avoiding harm or errors.

When a goalkeeper raises their arms to catch or punch a ball, their ribs are no longer protected and they are unable to use their arms for balance.

Ergo, to challenge a Goalkeeper in this instance is regarded as careless.

Hope that clears things up.
Graham, LFC (Retired member of the GK Union)

Continuation of a theme
How Liverpool can be fixed for net spend of nowt.

Take the summer off Jurgen.
Pip

Grow up, everyone
A pause for thought today as the respectful silence for the passing of Harry Gregg was observed at Old Trafford, and observed impeccably, all people in the ground , Watford and Manchester supporters alike, rightfully taking a moment to consider what that man went through, the tragedy of that night, and uniting in a common bond of humanity.

Which makes it all the more disgusting to hear at every Merseyside derby the songs which come from each sets of fans. Munich, Hillsborough, it’s disgusting, but both clubs seem to in some way tolerate it. The first time I heard the song about Hillsborough I just about threw up. Then the response about Munich.

Kenny Dalglish was close to a broken man after Hillsborough and commitment to the funeral services he attended and coordinated. Bobby Charlton suffered nightmares his entire career after the Munich crash; each were icons for their respective clubs, but both of those clubs seem to pay lip-service to seeking out those disgusting groups who want to use those tragedies as a form of goading.

Premier League grounds how have full crowd surveillance, they can find, identify and ban racists, homophobes, sexists and anyone else that blips the radar of unacceptability, and thankfully and rightly so.

So why are these groups of sick people still attending games? Why have they not been identified, prosecuted for public order offences and banned?

I know this is not timely as there was not a Merseyside derby this weekend, but if one of the legacies of Gregg’s passing was to ignite a discussion and a serious initiative to root out this pernicious hatred and take it out of the grounds, and hopefully into prison, then that’s a way to celebrate this great man beyond his time with us. It’s time for everyone to stop wringing their hands, whining that it’s “not right”, boo-hooing that it’s not what the club “stands for”, whatever that means, hiding behind “it’s just a minority”. Stop it. Put a stop to it.

Rant over, for the time being, until the next song about Munich, or Hillsborough, goes unpunished.
Steve, Los Angeles

Two left feet?
PSG v Bordeaux on Sunday evening… Unfortunately I do not know the commentator’s name but around 27 min Di Maria shoots over with his right:
‘His right foot is not is his left foot when it comes to Di Maria’
Larus